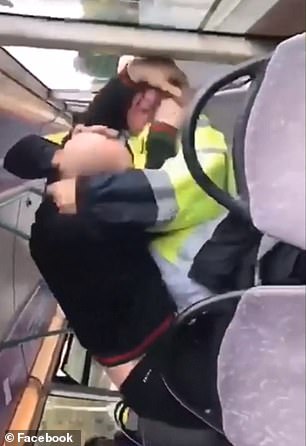 Vile moment man attacks off-duty bus driver who ‘nicely’ asked him to turn his music down as horrified passengers look onShelby Rebecca Tolhurst posted the clip on Facebook on September 18  Passenger punches off-duty driver and others wail in horror during attackDriver pins the attacker’s arms back before they squash into another passengerSome say the other passengers are ‘spineless and ‘cowards’ for not interveningOccured at 1.50pm on service 16 and West Yorkshire Police are investigating

By Phoebe Eckersley For Mailonline

A shocking video has emerged of a bus passenger attacking an off-duty driver for telling him to turn his music down on a bus in Leeds.

The man stands over the driver, who had just finished his shift and is wearing a high visibility jacket, and strikes punches to the back of his head on the First bus, in the clip posted by Shelby Rebecca Tolhurst, at 1.50pm on September 18.

He appears to say ‘you think you’re f****** big don’t you’ before the driver, who is thought to be in his 50s, is punched and sends passengers wailing in horror. 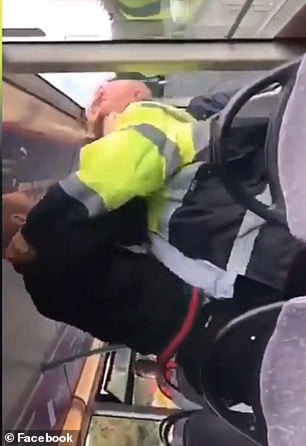 An off-duty bus driver (pictured in visibility jacket) was attacked by a passenger after telling him to turn his music down, on a First Bus in Leeds 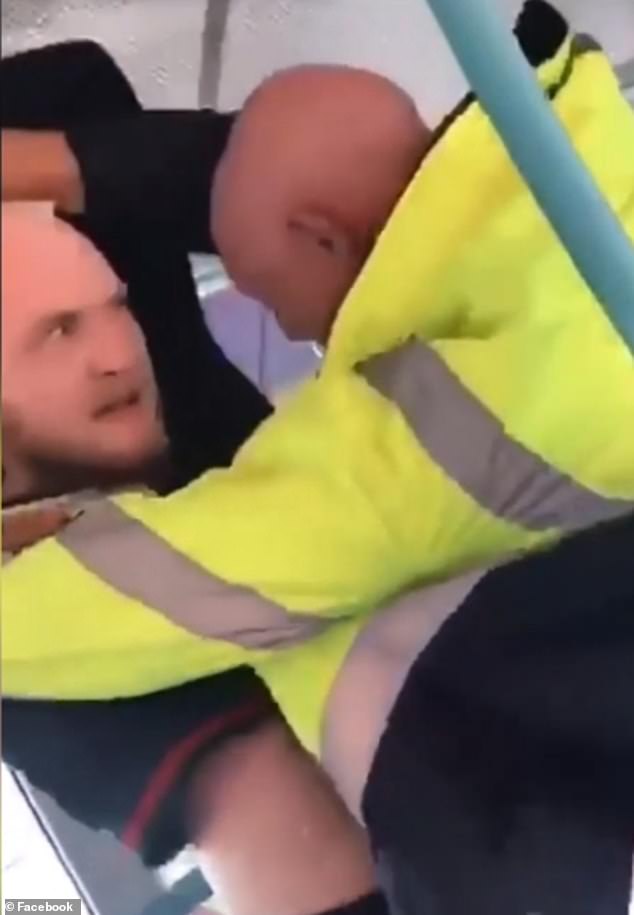 Menacing: The driver locks eyes with his attacker and manages to pin the his arms back for a brief moment before he pushes him to nearby seats where they squash into another passenger

The pair swerve and tug at eachother as they jostle across the aisle while the bus moves.

And the attacker can be seen clawing at the victim’s face and thrusting his head towards the window before the off-duty man tries to get his balance to push back.

Moments later, an onlooker can be heard saying  ‘what the f**k’ as the driver tries to pin the aggressor’s arms in the air and detain him. 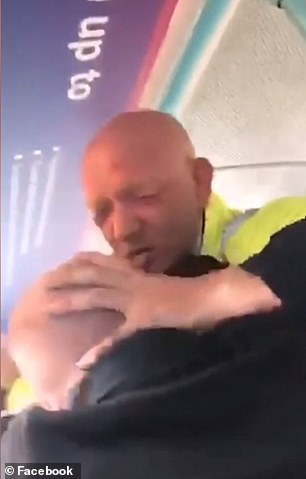 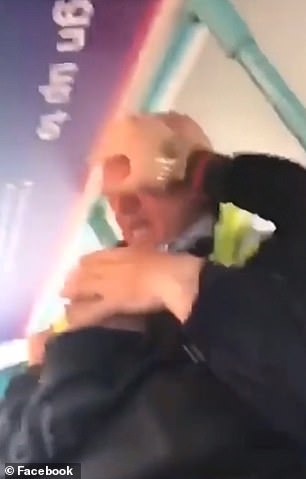 He can be heard murmuring to the attacker and holding his head firmly, shortly after the man had accused the driver: ‘You think you’re f****** big don’t you’

They grip eachother tightly and the wounded driver can be heard murmuring to him before they squash into another passenger who is sat on the bus, in the clip which has received 1.2k shares.

The attacker shouts at the driver to ‘f**k off!’ and punches his face twice.

Shelby Rebecca Tolhurst, who shared the clip but claims to have not been on the bus, captioned it: ‘This is vile! Doing this to a bus driver because he asked you nicely to turn your music down! He ended up in hospital you scum!

‘Anyone know who this man is? (The bus driver finished his shift and another driver took over that’s why the bus is moving)’ 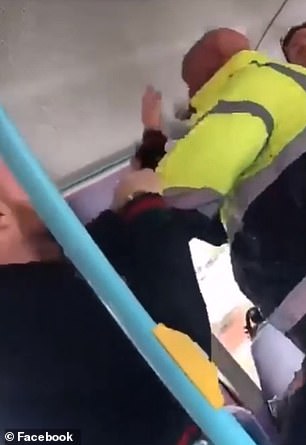 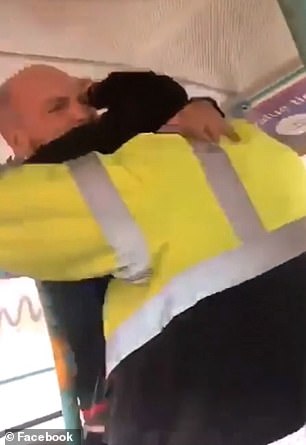 Shelby Rebecca Tolhurst captioned the moment on Facebook: ‘This is vile! Doing this to a bus driver because he asked you nicely to turn your music down! He ended up in hospital you scum!’

The video has sent the internet into meltdown as people are angered by nobody stepping in to help the bus driver.

Among the 459 comments, Lea Elizabeth Gadsden said: ‘Why was everyone just looking at him? Someone could of helped the poor guy? What a sad world we live in!’

Tom Harding wrote: ‘People are spineless and just watch… break it up or get involved.’

Cheryl Dunn added: ‘There’s plenty of people there who could [have] helped, bunch of cowards.’

Steve Godber wrote: ‘The other passengers should have helped the driver hope they catch the nutter.’

However, some feel the onlookers were right not to jump into the fight.

Kerry Twinks Beresford said: ‘This video could help prove that the bus driver was attacked should hand it to the police.’

David Graham added: ‘We can all comment about how someone should have helped, but in all honesty, could anyone say they wouldn’t have frozen in such a situation?

‘Thank goodness, though, we live in a day when people do have smartphones, and a clear, concise image of the scumbag has been captured, which will hopefully lead to his arrest and imprisonment.’

A First West Yorkshire spokesman confirmed the incident on the service 16 bus and are using CCTV footage and the West Yorkshire Police to help their investigation.

Anyone who witnessed the assault is asked to contact police quoting log 13190480151 on 101 or use the Live Chat facility at www.westyorkshire.police.uk/contact-us 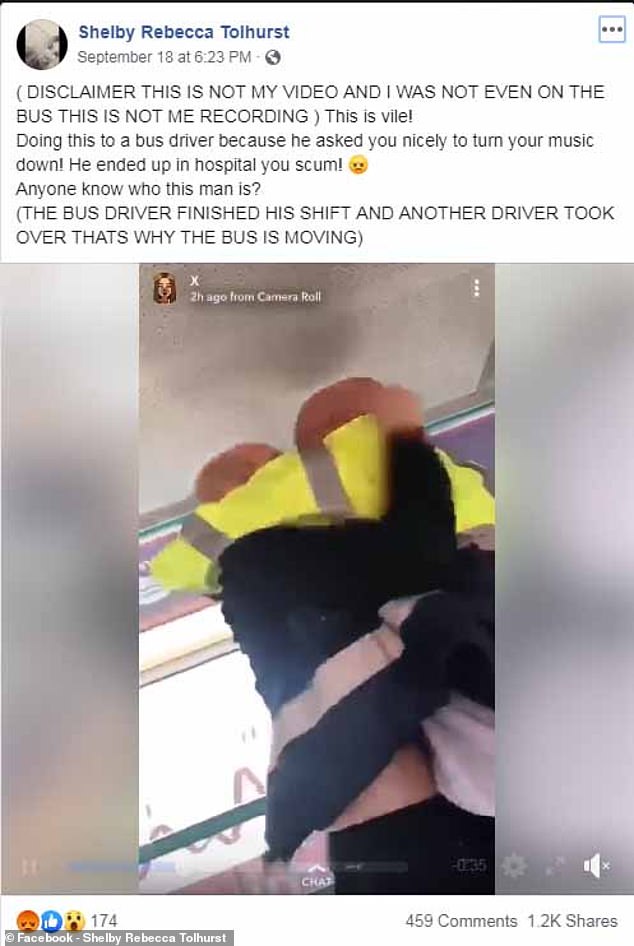