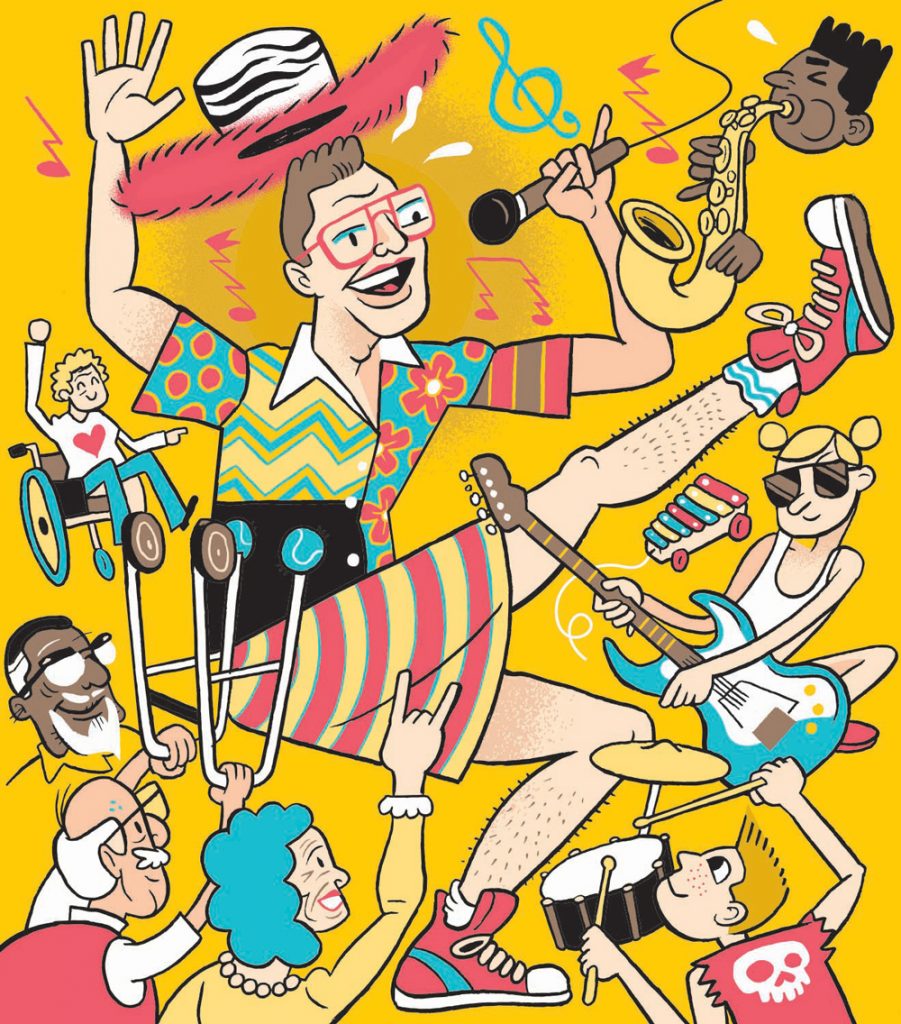 If you’ve seen any live music in Cincinnati in the past three decades, there’s little doubt you know him. He’s the one on stage in a tutu. Or a cheerleading outfit. Or a ladies’ swimsuit from the ’50s.

Tim Goldrainer is front man for The Menus, the cover band he and a school friend started 36 years ago. He’s the singer, dancer, comedian, and entertainer in lipstick who rides a skateboard on his hands through the crowd. The more over the top, the better. He’s also Curly of Curly & the Q-Balls, the group he and friends formed 20 years ago to perform standards by folks like Dean Martin and Sammy Davis Jr.

So he has the middle-age crowd covered. What about senior citizens and preschoolers? Well, his “Goldie Show” performed at nursing homes 140 times last year, and he just started his second year teaching music at a preschool.

Seems like a career reinvention for a guy who’s squarely in his middle fifties now. Maybe it’s time to do something else—36 years is a long time, and doing those splits in skirts can’t get any easier. But “slower” is not a speed Goldrainer knows.

The Menus still play 140 shows a year all over the region. He has loved music and performing it since long before he—in a Speedo—first took the mic in his hand at Woodhaven Swim Club when he was about 10. Music has never not been fun. Except that time he was “let go” from Elder High School’s glee club.

Now it’s more about making the music mean something, about teaching it to others, about leaving something more behind each day than happy bar patrons. “I can teach kids in the morning and sing to old folks in the afternoon, then entertain a bunch of drunk people on the weekend,” he says. “It’s the best.”

His life shifted, though Goldrainer didn’t realize it at first, when he visited his mom in the nursing home where she lived. When she dozed off, he would head down the hall and just bounce into patients’ rooms and sing a little Nat King Cole or Frank Sinatra. Sometimes, the patients joined in. He gets a little teary-eyed talking about it. “To watch them have that connection to music is just magical,” he says. “It’s like they remember sitting on their front porch, listening to AM radio.”

His mom died just after Christmas in 2016, but the traveling “Goldie Show” has become an official, successful thing. He kisses the ladies’ hands and flirts. They seem absolutely to be in heaven. He’s also mastered the art of dancing with people who have to do it seated. “Music is just medicine,” Goldrainer says. “These folks can’t remember what they had for breakfast, but they know the third verse to ‘It Was a Very Good Year’ by Frank Sinatra word for word.”

He says he still feels his mom’s presence when he plays at West Park, where she lived, and likes to think he’s honoring her by continuing his gigs in nursing homes and retirement facilities. She and his dad were completely supportive of their son pursuing music as a career instead of something more certain. They knew he wasn’t college material, he says, acknowledging that he dealt with ADD at a time when the issue wasn’t understood well. Kids who had it were dismissed as poorly behaved. “I was shunned for it,” Goldrainer remembers. “It was hard. Now I’m making a living with it.”

His dad took him to his first concert: Elvis Presley in 1977. The King would die just seven weeks later. Goldrainer remembers his mom telling him to get ready, that his dad would be picking him up soon. He thought they were headed to see the Cincinnati Stingers, a hockey team that played at what was then Riverfront Coliseum. “My dad took me to see Elvis,” he says. “It was just the best. My dad was a great guy. He couldn’t have been more supportive of me and my music.”

As for how he started teaching music at Creative Preschool, Inc., his neighbor asked him to do it. Goldrainer’s son, who’s now in eighth grade, attended school there years before, so he knew a lot about the place. That’s how things tend to happen on the west side—somebody knows somebody. Goldrainer grew up and still lives there with his wife, son, and daughter.

Music makes a different impression at Creative, where the kids love Mr. Goldie. He brings instruments to show how they work and how they sound. He might tell the kids to buckle their seat belts for a plane ride and play his reggae version of Peter, Paul and Mary’s “Leaving on a Jet Plane” while the kids run around the room and talk about the things they see on their pretend flight. Or he might rock out to Steppenwolf’s “Born to be Wild.” There isn’t a kid in the world who doesn’t love a song that says it’s OK to act wild. “I’m having as much fun as they are,” Goldrainer says.

He wrote some kids’ songs so his curriculum had a little bit of message. “Some Kids Like” stresses being yourself: “Some kids like riding a bike/ Some kids like to fly a kite/ Just do what you like/ There ain’t no wrong and there ain’t no right.” The songs are on Goldie, “my freshman album,” he calls it, released last year.

“Mr. Goldie days are the best days,” says Danielle Goertemoeller, the neighbor and preschool teacher whose idea it was to see if Goldrainer would teach little kids. One little boy gets so excited about music time that she can’t tell him it’s a Mr. Goldie day until Goldrainer is headed in the door. “The kids just love him,” she says. “I mean, they just completely love him. And he loves them. His heart is all over that place.”

Perhaps Goldrainer is growing a new generation of Menus fans. With the band playing at so many church festivals each summer, Mr. Goldie’s preschool fans are starting to see him on stage as well. It’s funny, Goldrainer says, when he’s performing in makeup and a miniskirt and one of his preschool kids makes the connection.

Fronting The Menus is Goldrainer’s main job. Though the Cincinnati music scene is constantly changing with venues closing and people’s tastes varying, the group continues to find success. Fraze Pavilion in Kettering, with 4,300 seats, sells out every time they play—and has for 18 years. They stick to the mix that works, the songs they’ve played for years that fans expect, but switch up the routine with new songs and costumes. Goldrainer is writing more songs and sees the nursing homes and preschool as new ways he can “learn, entertain, and use my brain.”

It’s not unusual for the festival shows to draw fans’ kids and grandkids. Goertemoeller originally learned of The Menus from her older sisters before meeting Goldrainer as the neighbor who shared his roasted pumpkin seeds. Her husband Googled the band. Now she’s seen them multiple times and taken her 9-year-old daughter, who is starting a band herself, possibly called the Rated-E BLTs. Goldrainer has agreed to consult.

“I’ve never been happier in my life,” he says. “I’m in shape, I’m there with bells on, sparkles, 15 wardrobe changes, and full makeup. A full-on circus performance. It’s a great gig. A great life.”