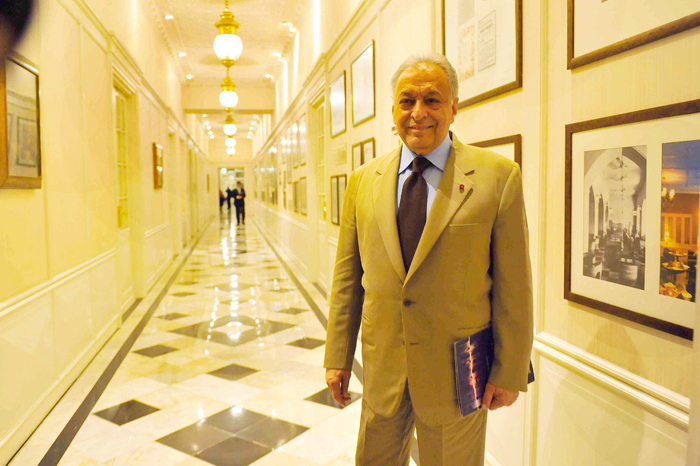 JERUSALEM: Superstar conductor Zubin Mehta, 83, takes to the Tel Aviv stage on Sunday for his final performance as music director of the Israel Philharmonic, retiring after 50 years with the orchestra. The performance of Liszt’s Piano Concerto No.2 and Mahler’s Resurrection Symphony is to be streamed live on pay-to-view portal www.medici.tv.

He will be joined by pianist Yefim Bronfman as well as soprano Chen Reiss and mezzo-soprano Okka von der Damerau.

It is scheduled for 2:00 pm (1100 GMT) at the Mediterranean city’s Charles Bronfman Auditorium.

His official biography says that during his tenure, “Mehta has conducted over 3,000 concerts with this extraordinary ensemble including tours spanning five continents.”

Zubin Mehta has conducted orchestras around the world, including in Austria, Germany and Italy.
He has simultaneously had other strings to his bow.

During his time in New York, he conducted more than 1,000 concerts, according to the New York Philharmonic website, which says his tenure “was the longest in the orchestra’s history.” He has conducted other orchestras around the world, including in Austria, Germany and Italy.

His father, Mehli Mehta, founded the Bombay Symphony and was music director of the American Youth Symphony in Los Angeles.

Together with his brother Zarin, he is a co-chairman of the Mehli Mehta Music Foundation in Mumbai, where children are educated in western classical music.

Rock And A New Role: Paul McCartney Has A New Book; Other Legends With Interests Beyond Mus…The Pen And Guitar

Sir Paul McCartney recently released a children’s book, which tells the story of a ‘Grandude’ and his four grand-kids. ‘The Beatles’ icon had authored another book earlier. Here are some other famous musicians and their interests beyond music. ​Toys In The Attic

Sir Roderick David Stewart or Rod Stewart loves kitbashing and scratch building. In simpler words, the Hall of Famer is heavily into model railroading. He has a 1,500-square-foot model-train layout in his Beverly Hills residence, which is a model of New York’s Grand Central Station. The singer traces his interest in trains back to his childhood in London. He never had a train set, but British Rail operated not far from the shop his parents ran.(Image: rodstewart.com)​The Trooper

‘Iron Maiden’s’ Bruce Dickinson dons a few too many hats when not captivating audiences with his voice. Apart from a musician, Dickinson is also an airline pilot, author, broadcaster, fencer and entrepreneur.And if you thought these were just hobbies, he is accomplished at each one of them. There are books and film scripts to his credit; he has competed at fencing internationally, hosted his radio show for BBC and even created a successful beer.​Modern Love And Art

The world lost a brilliant musician in 2016 when David Bowie passed away. Hailed as one of the most influential musicians of the 20th century, Bowie dabbled in acting too. But what he was passionate about was art. A painter and artist himself, the ‘Space Oddity’ singer’s art collection was legendary, most of which was sold after his death. In an interview to The New York Times, he had famously said, “Art was, seriously, the only thing I’d ever wanted to own.”​Pedal To The Metal

James Hetfield, the frontman of heavy metal band Metallica, is obsessed with cars and motorcycles. The musician has an enviable collection of vintage automobiles that was even put on display recently at the Los Angeles’ Peterson Automotive Museum. The 10 custom cars he donated to the museum included a 1948 Jaguar Black Pearl, which he built from scratch.