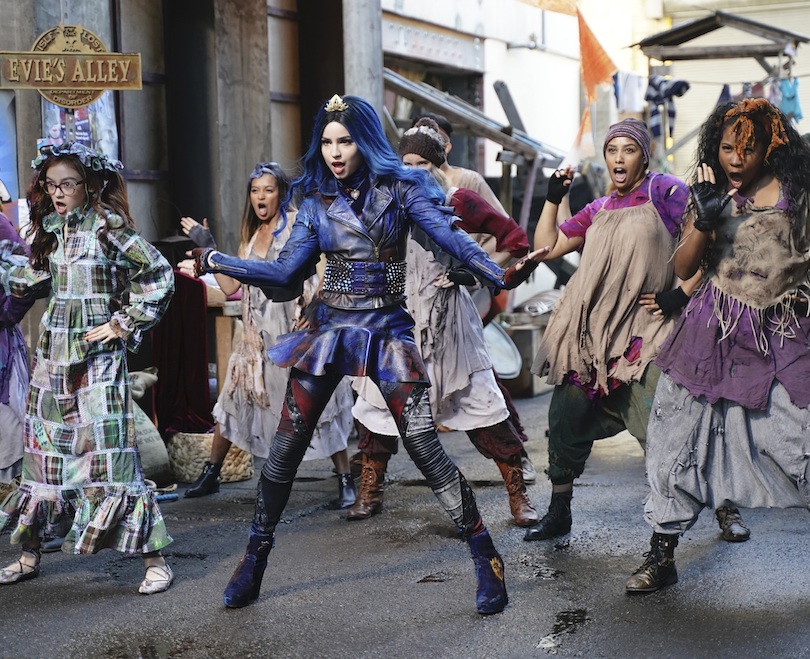 The three “Descendants” titles in the hit Disney Channel Original Movie franchise, one that’s engaged the imaginations of kids and tweens around the world, are at the center of a programming event, “Descendants 3 Labor Day Weekend Takeover,” Saturday, Aug. 31, through Monday, Sept. 2, on Disney Channel.

Since its Aug. 2 premiere, “Descendants 3” has reached nearly 20 million total viewers, including 4.7 million kids 6-11, across 21 telecasts.

During the “Descendants 3” telecast on Saturday, Aug. 31 (8 p.m. EDT/PDT), viewers will be invited behind the scenes for the cast’s recording sessions and choreography rehearsal. Choreographer Jamal Sims will provide commentary on the creative process for the 100-person finale number, “Break This Down.”

A closer look at the movie’s intricate wardrobe including the “Pirate Chic,” “Motor Sport Punk,” “Scallywag Swag” and “Dandy Candy” looks, plus Audrey’s “Queen of Mean” feathered cape and Hades’ rock ‘n’ roll ensemble, will be presented Sunday, Sept. 1 (8 p.m. EDT/PDT), during the telecast of “Descendants 3.”

Jackson, as Hades, debuts a brand new song, “Hades Rocks,” during the special sing-along versions of all three movies, with song lyrics visible on screen, Monday, Sept. 2, beginning with “Descendants” at 4 p.m., “Descendants 2” at 6 p.m. and “Descendants 3” at 8 p.m., EDT/PDT.