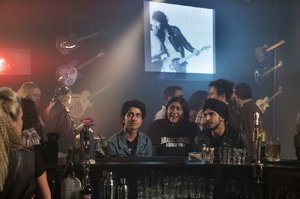 There comes a time in a young person’s life where one’s extreme fancy for a band — or a movie, TV show, author, or video game — can be coddled and indulged into pure-hearted obsession. Working with a near-blank slate for an identity, one can wrap themselves in the gauzy fabric of a single, much-adored totem and let that dictate their approach to the rest of the world, from a place deeply submerged within the soft folds, your vulnerable, adolescent self blissfully obscured from view.

In Blinded by the Light, Javed (Viveik Kalra) is a British Pakistani teen growing up in Luton, a suffering working-class town in Thatcherite mid-’80s England. He is increasingly fed up with the abuse and racism of his school peers and skinhead National Front thugs, along with the oppression of his domineering, traditionalist father (Kulvinder Ghir), that totem becomes the music of Bruce Springsteen.

Blinded by the Light

Rating: PG-13 for thematic material and language including some ethnic slurs.

Given a couple of Springsteen cassettes — Darkness on the Edge of Town and Born in the U.S.A. — by his Sikh friend Roops (Aaron Phagura), Javed finally plays them on his ever-present Walkman one windy and stormy night, and the power of the lyrics rip through his consciousness like a hurricane, speaking directly to his feelings of suppression and longing. (Fortunately, after this first night, the film sagely sticks to a steady diet of songs recorded earlier than the mass-consumed U.S.A., one of Springsteen’s weakest efforts of the era. By dint of its time frame, it also focuses on a particularly sunny and raucous epoch in Springsteen’s career: This would be an entirely different film if it used the songs of, say, the Nebraska period.)

Before long, Javed is using the music of Springsteen (“that Jewish singer,” as his father keeps insisting) to guide him and his life — as in, literally. In one of the film’s best scenes, after spying Eliza (Nell Williams), the classmate he has a huge crush on, he dons his headphones, cues up “Thunder Road,” and approaches her while singing along with the lyrics out loud, until the crowded market they’re standing seems to erupt in dancing and singing around him. Somehow, by dint of Javed’s earnestness, and the purity of his intentions, Springsteen’s lyrics of longing become more palpable (and not just because of director Gurinda Chadha’s penchant for literally popping key lyrics on the screen like a kids’ sing-a-long), connecting with the audience in a way that feels almost shockingly vivid.

A similarly effervescent effect comes during the obligatory “Born to Run” sequence a bit later on, when Javed and Roops sneak into the school radio station to blast the tune through the hallways of the school and across the city’s rooftops, and the entire town becomes a stage for their impromptu music celebration, joined by Eliza, somehow encompassing all of Luton in their joyous rebellion.

These are both stunning sequences, deftly using the conceits of the musical genre while keeping the sequences grounded in physical detail (we can clearly hear Javed singing over Springsteen’s keening voice). Less than a musical fantasia, but more than some kids jamming to some tunes, these scenes sharply render Javed’s breathless euphoria and make it thrillingly relatable — but these are also the highlights of what becomes a vastly more predictable crowd-pleaser by the end.

Notably, in those sequences, the community seems to come together to join in Javed’s infectious love of the music, an optimistic suggestion of unity that the rest of the film takes pains to rip apart. Luton is, like many small towns under the cold clutch of conservative Thatcherism, being torn to bits by the destruction of the manufacturing industry, the unions being dismantled and a generation of families spiraling down into economic hardship. As Javed’s proud father loses his managerial gig, he miserably dresses in his best suits and walks every morning to the postings of the available positions in town, only to be sent away in further disgruntlement when nothing comes of it.

Under this carnage, there is the unfailing rise of the National Front, a white supremacy group, holding parades and marking the town’s walls and doorways with messages of hate and xenophobia. In short, Chadha connects this rise of nationalism and anti-immigration in ’80s England with our current political malaise (a message underlined in yellow-highlighted irony when Javed explains to his father how much less racist the United States is than where they live).

It’s an apt comparison, but Chadha isn’t trying to make a forceful polemic. The film appears to be at least loosely based on a real person (before the end credits we see the “real” Javed in photos with Springsteen himself, having become a full groupie). But as much as the film takes pains to show the stress and suffering Javed and his family endure and the growing resentment between him and his father, it’s just as quick to put all of that behind it in preparation for a happy ending so trite and complete, it feels as if it’s cutting itself off at the knees.

Fortunately, Blinded by the Light has the talented and extremely charismatic Kaira to carry it through. Depicting a fetching sort of guilelessness and humility, the young actor, whose face is as rapid-emoting and expressive as a small child’s, carries the film with dignity and impressive charm. Because of his geniality, we want the best possible outcome for him, even as the film bends over backward to give it to him by the end.

The film’s message, that the emotional balm of music — in this case, that of “Bruuuuce” — can be universally applied suggests, even in these times of harsh division and the rise of racist rancor, certain ideas still have the ability to connect us (though, amusingly, for many of the other teenage characters in the film, Javed and Roops’ love of Springsteen isn’t necessarily unusual because of their race, but, rather, because, to their mind, the music is so old and out of touch). Lots of films use the jubilant power of music to suggest the salvation of its freedom, but few take that idea as literally as this one does.

Nick Wall
Blinded by the Light director Gurinder Chadha (center) works with actors Viveik Kalra and Aaron Phagura on the set of the drama about a working-class kid’s relationship to Bruce Springsteen’s music.