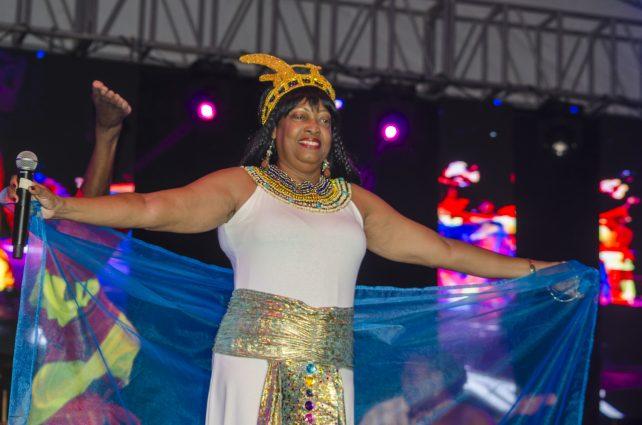 Dominica’s Lady of Song Ophelia Marie, has said that she is deeply grateful to once again be representing Dominica abroad. Marie is among 40 performers who will represent Dominica at CARIFESTA 2019 in Trinidad from August 15th to 27th.

She will be showcasing Dominica’s Cadence music.

“I am very delighted and honoured to receive one more time, the opportunity to represent Dominica abroad and I guess when I am selected, it’s because people are telling me they consider my talent at the level that will be pleasing to all Dominicans and so when I perform outside in this kind of capacity, I am really at my best,” she explained in an interview with State-owned DBS Radio.

Marie said her performance on stage will invite people to come to discover Dominica for what it is.

“I do what I would like to see other people see about Dominica and by virtue of my presentation on stage, I am inviting people to come and discover the country that is ours, not just the nature isle of the Caribbean but the nature isle of the world and I do it with whatever I have, inclusive of my voice the higher power has given me,” she stated.

Dominica’s Bouyon music will also be displayed by the Signal Band. According to band vocalist, Sheldon Alfred, CARIFESTA represents a great platform for musicians and aspiring musicians.

“We at Signal Band are truly honoured to be representing Dominica at CARIFESTA 2019 in Trinidad and Tobago. CARIFESTA is a great platform for aspiring musicians, it is a great time to meet the greats of the Caribbean, a great time to network and get our music, not just the name of our band,” he stressed.

Alfred sees this as an opportunity to represent Dominica and to get Bouyon music “out there” and strengthen its  presence in the “new market” which it has been creating over the past couple of years.

Dominica will be presented by a 40-member national cultural delegation at this year’s CARIFESTA. In addition to Ophelia and Signal Band, the cultural contingent will include a Kalinago group, the Carina Cultural Group, some members of the Sibouli Massace Cultural group and the Waitkubuli Dance Theatre Company, a jing ping band led by Odel Hamiliton and a drumming ensemble made up of  drummers from various groups.

Chief Cultural Officer, Raymond Lawrence has said that Dominica’s art and craft, including our Kalinago craft, as well as two locally produced  films by Alwin bully and Micheal Lees will feature in the Carifesta Film Festival as part of Dominica’s representation.

He said Dominica’s participation in CARIFESTA will help to further market the skills and talents and will be a wonderful opportunity for further promotion of Dominica as the nature isle of the world.