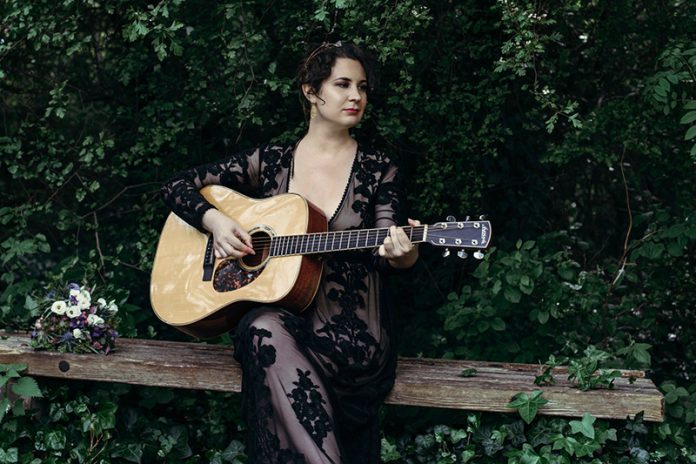 On Wednesday, Oct. 9, at 7 pm, renowned Americana Gaelic performer Kyle Carey will take the stage at the Katharine Cornell Theater in Vineyard Haven for a free public concert presented by the Vineyard Haven Public Library. Carey will perform a solo set of original music and a blend of songs from her recorded catalog. “I try to take people on a journey,” Carey tells The Times. “There will definitely be a lot of storytelling, folklore, and history.” Fans have grown to expect no less from one of the country’s foremost performers of traditional Gaelic and American folk music.

Carey’s career has unfolded like an epic folk tale. The artist spent her formative years in the Alaskan bush, immersed in the culture and language of the indigenous Yup’ik community there. Her parents were teachers, and decided to journey West from New England in accordance with their “back to the land” philosophy. The home was filled with folk music and literature, and Carey recalls her father reading “Jane Eyre” aloud to her when she was only 5 years old. It’s no wonder that in the decades that followed, Carey’s love of language and storytelling would take her across the ocean to Ireland and Scotland, where she would master the language of her ancestors and, ultimately, weave her abilities into a musical career unlike any other.

“My parents told me I started singing around the time I started talking — it came very naturally to me,” Carey says of her initial foray into music. While guitar came as a secondary instrument, Carey soon learned that self-accompaniment would be a great asset. Carey tells The Times, “I perceived that if I wanted to make music more sustainable, then I would need to be able to go out and play a show on my own and not depend on anyone.” The years of guitar playing and practice have paid off, and it is evident in even her most stripped-down performances that both the instrument and her voice are finely tuned to reach her audience.

Carey was first introduced to folk music when she was a volunteer at the historic Caffe Lena in Saratoga Springs, N.Y., where she attended Skidmore College. As a sophomore, Carey visited Ireland, where she heard the indigenous language for the first time, and became enamored of the culture. The following year, Carey returned to Dingle to study the language in an immersive program, and after graduation she received a Fulbright scholarship to study Scottish Gaelic on Cape Breton Island in Nova Scotia. “I knew that I really wanted to make a kind of music that combined my American heritage with my interest in Celtic music and my own ancestral roots,” Carey said. Carey’s love of music and language had reached a synthesis, and the path forward was clear.

The state of the Irish and Scottish Gaelic languages is close to Carey’s heart, as her love for the marginalized native languages drives so much of her musical work, and Carey is passionate about their role in modern culture. “I feel like it’s part of our duty as humans and part of a multicultural world that we need to protect these things that are being threatened,” Carey tells The Times, “and I think minority languages are really important because they help preserve our different cultural perspectives.” This distinct point of view is exactly what makes Carey stand out in a crowded field of talented singer-songwriters in the folk scene. “There’s a very Gaelic way of looking at the world that is conveyed by the language, and I would hate to see that go away forever,” Carey says. “I do feel really invested in it, and with the music, I feel really strongly that if I’m going to sing in this language, I need to be able to speak it, it needs to be part of my life.”

Carey’s music truly defies simple categorization, but the term “Gaelic Americana” serves as a rich prompt. On a first pass it can seem like straightforward folk or old-timey music, but upon further inspection it becomes clear that there is much more at play than three chords and the truth. Carey’s albums, of which there are now three, weave in and out of Gaelic ballads and English originals. Her latest effort, “The Art of Forgetting,” transports the listener to the American South, where Appalachian and Cajun influences underscore the interconnectedness of the genres Carey has come to master. Carey is quick to credit her producer, four-time Grammy awardwinner Dirk Powell, with these newfound sounds, and Carey is joined by an all-star cast of performers. Rhiannon Giddens, John McCusker, Mike McGoldrick, and Sam Broussard lend their talents to a worthy collection of songs that stir the conscience and strike a delightful and introspective tone.

In keeping with tradition, Carey and her husband are immersed in their own generation’s “back to the land” movement, and are in the midst of construction on a tiny home in New Hampshire. How fitting in this case that history doesn’t repeat, but it rhymes.

Kyle Carey will perform on Wednesday, Oct. 9, at 7 pm at the Katharine Cornell Theater in Vineyard Haven. The event, sponsored by the Vineyard Haven Public Library, is free and open to the public.