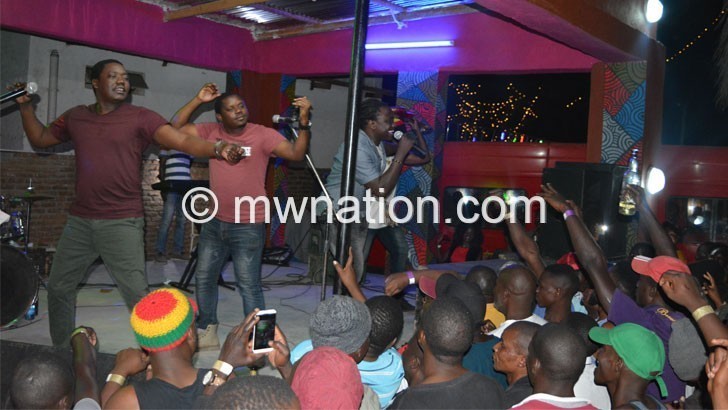 Some musicians in the country have described government’s continued stance to bar them from holding live public performances as unfair and baseless, saying the move will only worsen their economic situation.

On Monday, the Ministry of Youth, Sports and Culture released a letter which stressed its stance restricting public gatherings of not more than 100 people.

Government‘s position is in response to an announcement by Concerned Active Musicians and Musicians Union of Malawi (MUM) to resume live public performances.

The letter says no musician should resume public performances and reminded them to play their role by avoiding endeavours which are in violation of the regulations meant to control the spread of the coronavirus pandemic.

But in an interview yesterday, MUM president Gloria Manong’a said her committee will be meeting for the way forward.

She said: “We have received the letter. However, MUM executive will shortly meet to come up with its position with regards to government’s refusal to allow us resume the shows.”

But the development has not gone down well with a section of musicians in the country some of whom had lined up a number of shows this weekend. They say it is unfair for government to appear to be strict with artists while politicians are holding public rallies freely.

One of the music acts which announced planned shows Black Missionaries, say they will proceed with their scheduled shows despite the recent government stance.

The group, through their leader Anjiru Fumulani said they have already spent money preparing for the shows and cannot cancel them.

“We are already going through financial hardships and we cannot afford to let all this money go down the drain. The feeling we are getting here is that coronavirus can only be contracted at music shows and not political rallies. It is baffling,” he said.

But Skeffa Chimoto, another artist who is also expected to take to the stage this weekend, did not come out clearly on his planned tour of Mchinji, Kasungu and Dwangwa in Nkhotakota.

He said: “Tiziona, [We will see.]I can’t just tell you my position in this moment. I need to think soberly before making my final position known.”

Gospel artist Thoko Katimba, one of the members of Concerned Active Musicians, said it is difficult to appreciate government’s stand on live music performances considering what is going on elsewhere.

He said: “When it was announced that public gatherings should stop, we as musicians, took heed of that call. We were meant to believe that coronavirus is real and dangerous. But what we are seeing now is different.

“This is a survival battle. Politicians need people to get them into offices and we also need our fans to survive. It is better if government allowed these two to continue together.”

Katimba said as Concerned Active Musicians, they will discuss the recent development and come up with a final position.

In a separate interview, owner of Club 20 Four 7 in Blantyre where Ma Blacks will hold a show this Friday, MacDonald Soko, said government’s directive on live music shows is a joke.

“Are political rallies not public gatherings? This is selective justice,” he said.

In its letter to MUM dated May 26 2020, the ministry says its position on live public performances has not changed.

“The regulations are still in force, and relevant government authorities are empowered to enforce these regulations,” reads part of the letter signed by director of arts in the ministry Humphrey Mpondaminga.

But government’s response contradicts what is happening in the political arena where politicians and other senior government officials are busy criss-crossing the country, addressing huge crowds ahead of the fresh presidential election. MUM requested the ministry through a petition dated May 17 2020 to lift the suspension because the livelihoods of musicians and their dependents had been “critically affected by the ban” and had rendered them vulnerable citizens.