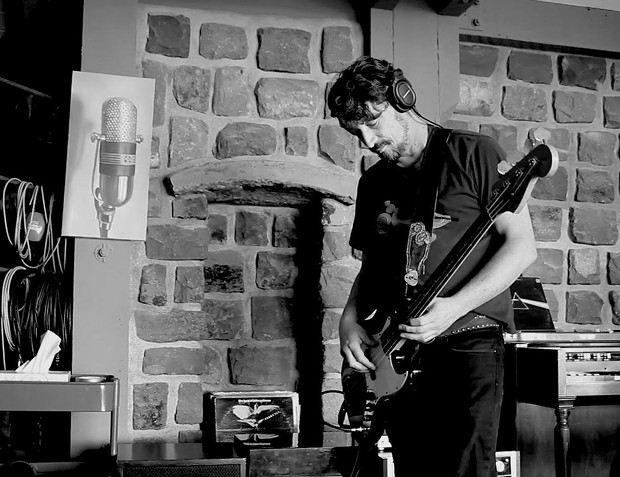 Like many people in Marin County, teacher and musician Colin Schlitt has been stuck at home for more than two months.

The longtime Point Reyes Station resident is best known musically in Marin as the bassist and occasional vocalist for eclectic alternative-pop ensemble El Radio Fantastique. Now, Schlitt turns up the reverb with his solo project Peppermint Moon, which released a digital EP, A Million Suns, in late April.

The new EP follows Peppermint Moon’s 2019 debut album, Symphony of Sympathy, and the five tracks on A Million Suns find Schlitt crafting psychedelic dream pop that walks the line between the Beatles and early Radiohead, with forlorn vocals akin to Wilco’s Jeff Tweedy and melodic hooks that would make Beck jealous.

Schlitt grew up in Point Reyes Station after his family moved there from New York. His musical education began early.

“I’ve always been interested in music,” Schlitt says. “I started tinkling on the piano as soon as I was tall enough to reach the keys.”

He also discovered his parents’ record collection at a young age, playing their copy of the Beatles’ Revolver until he wore out the vinyl.

“I was so fascinated with those sounds,” he says. “That is one of my earliest memories.”

After reluctantly taking piano lessons and learning guitar, Schlitt found his instrument of choice in the electric bass when he was 16 years old.

“I feel like the bass is the essence of every song, like every song can get boiled down to the bass musically,” Schlitt says.

Schlitt’s bass influences include Paul McCartney, John Entwistle of The Who, Motown-legend James Jamerson and Bruce Thomas, who is best known as the bass player with Elvis Costello & the Attractions.

After high school, Schlitt moved to Los Angeles to play music, though he moved back to Point Reyes Station more than a decade ago to raise his daughter with his partner.

Once back in Marin, Schlitt hooked up with songwriter and bandleader Giovanni Di Morente and joined Di Morente’s bombastic El Radio Fantastique.

“When I joined the band, (Di Morente) asked me if I had any songs, and I played some songs for him,” Schlitt says. “He was so encouraging that I started to develop that more. This side project Peppermint Moon would not exist without his encouragement.”

Schlitt’s songwriting process employs a lyrical trick that he learned from Di Morente.

“You come up with a melody first, and instead of coming up with lyrics, you sing gibberish with a lot of vowels,” Schlitt says. “As you do that over and over, subconsciously you start to fill in words here and there, and it’s amazing how the meaning of the songs develop themselves in this subconscious way.”

For this project, Schlitt played every instrument himself, including drum tracks performed on a synthesizer, and he assembled up to 24 individual musical tracks for each song. The entire record was recorded in Schlitt’s Point Reyes house, where he turned his bedroom into a makeshift studio.

“I love being in the band and I love collaborating with people, but it’s also really satisfying doing it myself in its own way,” he says.

At first, A Million Suns was simply going to be a single, but the shelter-in-place orders gave Schlitt plenty of time to write more songs, and he turned the single into an EP.

“This project has made a big difference keeping me sane and busy,” Schlitt says.

“We had these songs we were just finishing up mixing when the pandemic hit,” Schlitt says. “As a band, El Radio Fantastique is waiting for this to play out. Thankfully, we had this stuff recorded and ready to go.”