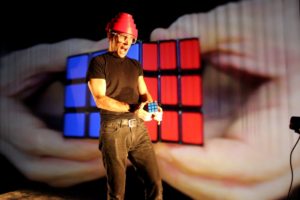 In 2015, BOOM—a one-man show written and performed by Rick Miller about the legacy of the baby boom—came to the Belfry Theatre. Miller, a musician and devoted music fanatic, initially used BOOM to explore the early evolution of rock and roll, but it quickly evolved into something more.

“It was about music at first, and when I started diving into it, I realized you can’t talk about the history of rock and roll without bringing in the technology of the time, the politics of the time, and even the culture, you know, styles—the trends and the fads of the time,” says Miller. “So, I realized this was getting to be a broader topic overall, and then my dad started sending me these stories—kinda like little pieces of an autobiography of his life when he grew up in the war, during World War II. And they were such fabulous stories that I had never heard before that were so different from your typical baby-boomer story from the TV shows that I’d seen that I thought, well, why don’t I try more of a personal documentary but still bring in all of the historical, technological, political, cultural events as well? And that’s how BOOM came about.”

BOOM-X dives deep into the sights and sounds of generation X (photo by Irina Litvinenko).

This summer, Miller is back to continue the narrative with the second part of what will be a trilogy, BOOM-X.

“I always knew I wasn’t going to stop at the baby boomers,” he says. “I wanted to talk about today, but to do that I had to break it down into three sections.”

BOOM-X focuses on Miller’s own generation: generation X. On this journey, Miller will perform a total of 100 voices to represent the evolution of gen-X. Several factors—what music he could get rights to (grunge in particular proved challenging), what would work with his own voice, how to create a show that would appeal to multiple generations—went into the decision-making process when creating the catalogue of music for the show. Miller was also careful to not let his own nostalgia get in the way.

“I realized there’s a certain sweet spot when we’re 14 years old, or 15, and we have a real emotional attachment to the music and culture of that time. That’s sort of where we figure ourselves out,” says Miller. “For me that was the mid-’80s. I realized how hard it was to be more objective of the era when everything you live is by nature subjective, and I realized the music I liked, the one-hit wonders… were not necessarily [liked] by all gen-Xers—partly because it’s subjective, but also partly because that gen-X era is characterized by this complete lack of cohesion and really deep polarization between politics and cultural extremes.”

Miller says that there’s nothing that unifies gen-X (“That’s why it’s called ‘X,’” he says), using punk and disco as examples of this polarity.

The play will take music lovers from the early ’70s to the mid ’90s, from the battle of communism versus capitalism through the Cold War to the political divides Miller believes we are seeing today.

“You couldn’t be Liberal and Conservative, you couldn’t be Democrat and Republican,” Miller says. “There was no middle ground at all.”

Miller explores the grey areas within that black-and-white mentality of gen-X in the play. He should know all about that sort of tension: he grew up in Quebec at a time when it wasn’t clear if the province would separate from the rest of Canada.

“I’ve grown up very much a Canadian, but, you know, wondering what that means,” he says, “and constantly reinventing myself because I figure identities are not solid. They’re—like today—they’re constantly changing.”