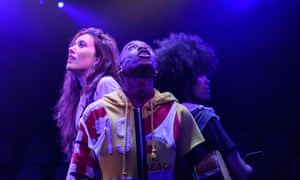 Planting saplings has been proposed as part of a DIY solution to the climate crisis, for those of us who can’t approve legislation (about a trillion new trees should do it). So what direct action can be taken when councils lop down precious trees? That’s one of the questions posed by Parakeet, an eco-musical of small scale but mighty power, which finds a perfect home in Paines Plough’s intimate Roundabout venue.

Written by Brigitte Aphrodite with music by Gaz Tomlinson, AKA Quiet Boy, it’s as colourful in its approach to complex material as their 2015 show about depression, My Beautiful Black Dog. Parakeet also asks how theatre can play a role in sustainability. And, in a show fizzing with youth, one other question stands out: if 16-year-olds can legally become company directors and have sex, why on earth can’t they vote?

Michelle Tiwo is immediately compelling as Girl, an otherwise unnamed teenager uprooted from London to Margate, where the landscapes show a “sky that can’t be denied”. As Girl struggles with coming out to her mother, and deals with her mum’s new geezer boyfriend, the only comfort she finds is in spotting the rose-ringed parakeets that appear as magically and mysteriously in Thanet as they do in the capital. One theory, posed in the show, is that they represent the spirit of Jimi Hendrix, who released a pair in London. (Others credit Shepperton Studios’ 1951 production of The African Queen with the south-east’s parakeet population.)

When Girl meets Dust (Isabel Oliver), who was raised in Margate, and Tam (Lula Mebrahtu), an Eritrean refugee, the trio form a punk group. But these punks are about empathy as much as anarchy and they rally to save a tree that is home to nesting parakeets and due to be felled.

The play’s exotic-bird metaphors stand out like the bright green hair of Aphrodite and Quiet Boy, who share the stage with the three actors. The parakeets are vilified, we’re told, for drowning out the voices of native British birds. This tale of fitting in and speaking up treads familiar ground and lacks depth of characterisation, but Laura Keefe’s production and Aphrodite’s script have an appealingly raggedy quality that matches punk’s DIY spirit. It also complements Alex Noble’s patchwork, birdlike costumes, made using materials sourced from a charity that collects unwanted clothing. And when these punks sing, the show soars with an energy you could only dream of harnessing.