Summer concert season may be winding down but these books by — and about — musicians will keep the spirit flowing.

Here are 11 highly anticipated music books due this fall.

“Mixtape Potluck Cookbook: A Dinner Party for Friends, Their Recipes, and the Songs They Inspire” by Questlove and Martha Stewart. Perched behind his drum set, Ahmir “Questlove” Thompson is known for serving up serious beats with the Roots, his prolific, groove-forward band and “Tonight Show” house act. With his cookbook, Thompson dishes out recipes and playlists to turn up the volume on any dinner party. He is an epic party-thrower and invites guests to bring entrees inspired by a song he assigned. “The food salons are a great place to meet people, to catch up with people, and to enjoy people’s company,” he writes. “They are also a great place for casual epiphanies.” The book includes recipes by actor Fred Armisen, “Top Chef” host Padma Lakshmi and L.A. “Top Chef” contestant Nyesha Arrington. Food world titan Stewart provides a recipe for grape focaccia and pens the book’s introduction.(Oct. 15)

“Jeff Buckley: His Own Voice Journals, Objects & Ephemera” by Mary Guibert and David Browne. The free-spirited Buckley dived into the Mississippi River on May 29, 1997, floated on his back and sang to his friend on the shore. It was the last time he was seen alive. Buckley’s accidental death left many unanswered questions but this assemblage of journal entries, music-industry paper trail and fragments of songs written on scraps of paper helps fill in the blanks. The book, by Buckley’s mother and Rolling Stone writer Browne, tell the story of growing up in Orange County, his days performing in dead-end Hollywood bands and his creative surge followed by a major-label record deal in New York City. (Oct. 15)

“Bowie by O’Neill: The Definitive Collection With Unseen Images” by Terry O’Neill. David Bowie inextricably linked his sound and image, making it nearly impossible to imagine one without the other. We know his “Ziggy Stardust” Starman persona, his svelte “thin white duke” years and his Aquanet-rocker motif as Jareth in the Muppet-filled fantasy film “The Labyrinth.” But there still are sides of Bowie yet to be seen. Photographer O’Neill brings to light rarely seen pictures of Bowie from his archives, including Bowie in Los Angeles during his 1974 tour, his wiry frame barely holding up a billowing white suit, and an impromptu performance with members of the Who and Rolling Stones at Peter Sellers’ 50th birthday party. In a Beverly Hills photo shoot with Elizabeth Taylor, the unflappable Bowie seems nervous in the star’s presence. “Even a simple portrait was not simple,” O’Neill writes. “David always chose his own direction.” (Now available)

English singer, musician and actor David Bowie in concert during his Diamond Dog tour in Los Angeles, circa 1974. Photo from From “Bowie by O’Neill: The Definitive Collection With Unseen Images.”

David Bowie posing as a dog, to be used a reference by the artist Guy Peellaert for the cover of the 1974 album “Diamond Dogs.” From “Bowie by O’Neill: The Definitive Collection With Unseen Images.”

English singer, musician and actor David Bowie with dyed red hair and a mustard-yellow suit photographed for a magazine in Los Angeles, circa 1974. From “Bowie by O’Neill: The Definitive Collection With Unseen Images.”

Singer David Bowie with actress Elizabeth Taylor in Beverly Hills, 1975. It was the first time the pair had met. From “Bowie by O’Neill: The Definitive Collection With Unseen Images.”

English singer, musician and actor David Bowie in concert during his Diamond Dog tour in Los Angeles, circa 1974. From “Bowie by O’Neill: The Definitive Collection With Unseen Images.”

Singer David Bowie wearing a smart hat during the filming of ‘The Man Who Fell to Earth’ in Los Angeles, 1976. From “Bowie by O’Neill: The Definitive Collection With Unseen Images.”

“Horror Stories: A Memoir” by Liz Phair. On the spectrum of early-’90s indie rock, Phair’s sound fell somewhere between the catchy riffs of the Pixies and perhaps a less frenetic Sleater-Kinney. Her popular 1993 album, “Exile in Guyville,” brought her empowering messages to the MTV masses, setting the stage for a wave of female singer-songwriters who wielded electric guitars as their weapons of choice. Her memoir is a raw look at fame, motherhood and aging with all the unbridled honesty of the songs that put the Manhattan Beach-based singer in the spotlight in the first place. (Oct. 8) 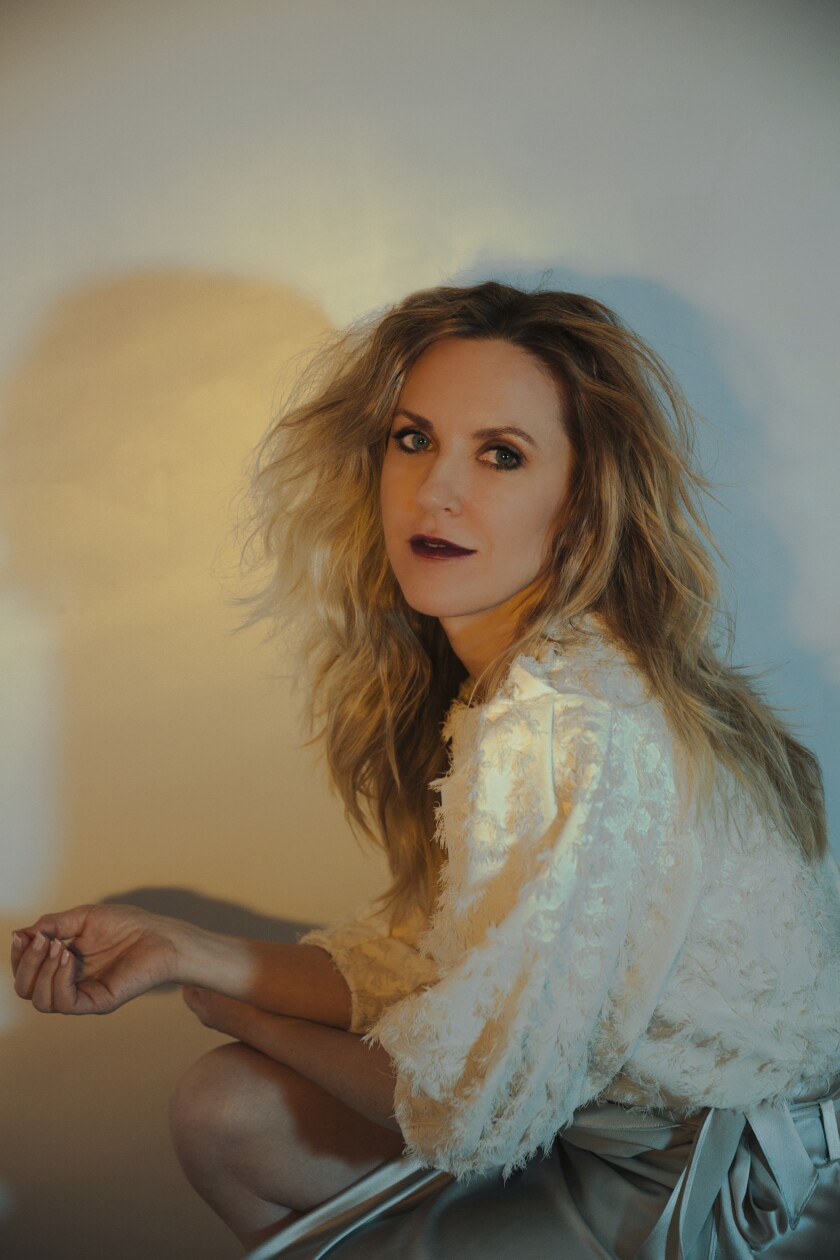 “Wichita Lineman: Searching in the Sun for the World‘s Greatest Unfinished Song” by Dylan Jones. Over his six-decade career, country star Glen Campbell sold 45 million albums. But one song stands apart: “Wichita Lineman.” Dylan Jones, editor in chief of British GQ, dedicates his new book to the lonesome tune, using it as a springboard to dive headlong into Campbell’s life. The book encompasses life in the heartland and L.A.’s booming 1960s music industry. Written by L.A. hitmaker Jimmy Webb and performed by Campbell, the song seems to be about a solitary telephone line repairman dreaming of a connection with an “absent lover” he hears while eavesdropping. “‘Wichita Lineman’ is only 16 lines long,” Jones writes, “and yet this dustbowl epic paints a whole life as though it were poetry, and it says as much in three minutes as many authors say in a lifetime.” (Now available)

“Toy Fabels” by Cass McCombs. The sound of McCombs’ lithe voice and crisp guitar doesn’t quite rock, it wafts, unfurling a chill mood wherever the wind may take it. Yet the Northern California-raised troubadour’s lyrics are lightning bolts too: absurdist, funny and sometimes dark. His debut poetry book, released by Sacramento indie publisher Spurl Editions, showcases graffiti artists, drug runners and a broken-down band van in Gallup, N.M. Part Bukowski, part Tom Waits, McCombs’ poems evoke the gritty feel of his time in the Pacific Northwest, Baltimore and especially the Bay Area and its rough-and-tumble peripheral towns before the tech boom. Yet McCombs says the San Francisco he experienced will live forever. “It is not about anything disappearing, it is eternity,” he says, “[San Francisco] will never change.” (Oct. 16)

“Year of the Monkey “by Patti Smith. Smith’s latest memoir traces her year of wandering across California’s Santa Cruz coast and the West, searching for answers for questions she never knew she had. It was New Year’s Day in 2016, and she had finished a string of shows at San Francisco’s Fillmore theater. So she hit the road. Along the way, she glimpsed moments of truth and beauty, challenges and victories, which she captures in her poetic prose and snaps of her trusty Polaroid camera. Like those hazy photographs, Smith’s writing is impressionistic; fact and fiction intermix and she captures authentic moments that never fade away. (Sept. 24). 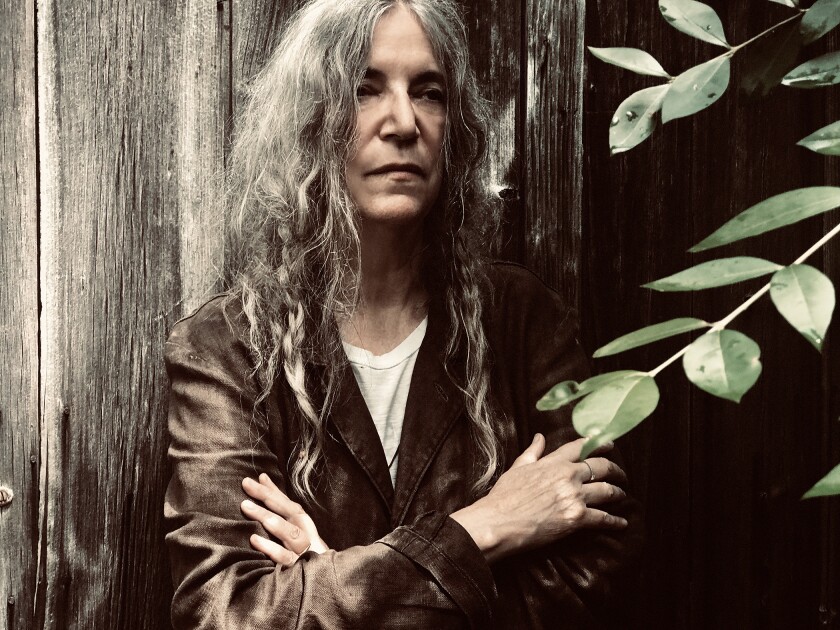 Patti Smith’s new book is “Year of the Monkey.”

“High School” by Tegan and Sara Quin. As indie rock’s second-most-famous identical twins (the Breeders’ Kim and Kelley Deal still reign supreme), Tegan and Sara Quin began as a Calgary coffee shop act and blossomed into an international act, selling out venues around the world and earning a Grammy nomination. But the sisters’ co-written memoir isn’t about their life onstage or their LGBTQ activism. Instead they focus on their high school years, which paved the path to notoriety. They were latchkey kids curled over guitars, strumming power chords and expressing themselves through polychromatic hair dye and their “light punk” band Plunk. They attended raves in hockey rinks, made prank calls and wrote songs about the first girls they loved. They recount signing their first demo deal with Polygram on Sept. 19, 1998, their 18th birthday. “Mom faxed it when she got to work that morning,” Tegan says, “and that afternoon Sara and I went to a hair salon and shaved our heads.” (Sept. 24)

“Dublab: 20 Years of Future Roots Radio” by Alejandro Cohen and Mark “Frosty” McNeil, with J.C. Gabel. Long before Spotify streaming, podcasts and the plethora of options for audiophiles everywhere, there was “internet radio.” Dublab, one of L.A.’s earliest internet radio stations, was an innovator in the space, offering hand-selected music by DJs whose care can never be matched by almighty algorithms. In the 20 years since Dublab began, the station has become an agent of creative community-building, bringing people together for arts installations, DJ nights and concerts of often off-the-radar talent. Published by L.A.-based Hat and Beard Press, the book reflects on two decades of antics, presenting interviews with musical luminaries like Van Dyke Parks and highlighting artwork created in the collective’s orbit. Witness it all at Dublab’s anniversary celebration on Sept. 21. (Nov. 12)

“Face It” by Debbie Harry. New York City in the late 1970s was a cauldron overflowing with a primordial soup of creativity: Disco, punk, new wave, hip-hop, pop art, fashion icons, street art, all emanated from a few square miles packed with ambition. Among this mélange was Debbie Harry, the artist, actress and frontwoman for the immensely influential band Blondie. In her memoir, “Face It,” she sets the scene for downtown’s iconoclastic artistic explosion, revealing how the New Jersey singer became the nexus of it all. Her memoir delves into darker times too; her addictions, sexual trauma and serial killer Ted Bundy. But through everything, she remained strong, emerging from her hardship as an everlasting icon. Just don’t call her Blondie. (Oct. 1) 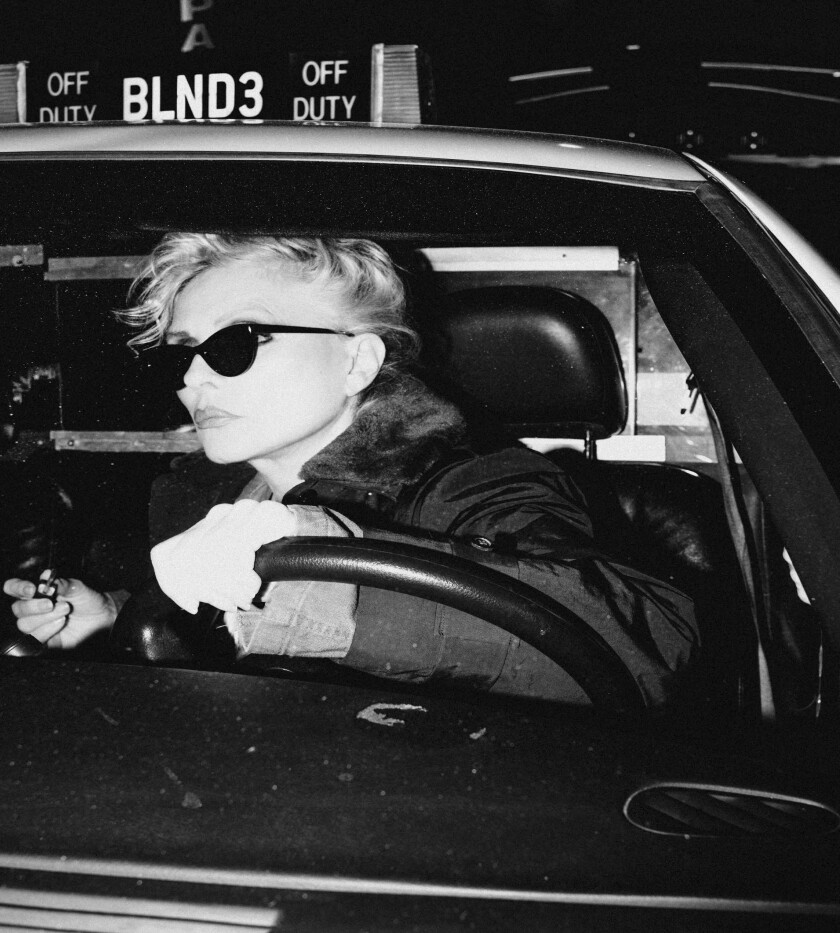 “Together Forever: The Run-DMC and Beastie Boys Photographs” by Glen E. Friedman. Immersed in the skate and punk scenes of the 1980s, Friedman’s photographs were a window into a subculture percolating under the surface of Ronald Reagan’s America. Then in 1987, he documented a critical moment in the emergence of hip-hop: the joint tour of Run-DMC and the Beastie Boys. This photo book, published by Rizzoli with a foreword by Chris Rock, shares the moment when hip-hop moved from the inner city to suburbs everywhere, forever changing the style and sound of American culture. (Friedman also wrote the recently rereleased photo book on the crucial straight-edge punk band Fugazi, “Keep Your Eyes Open,” featuring a new interview with frontman Ian MacKaye.) (Oct. 1)

Tewksbury is a writer, editor and Emmy-winning producer in Los Angeles.