In mid-December 2017, two months after reporting on Harvey Weinstein triggered what is now known as the #MeToo movement, Drew Dixon bought a copy of the New York Times at a coffee shop in Brooklyn, where she moved 25 years prior as a starry-eyed college grad determined to work in music. On the front page was a story titled Three Allege Music Mogul Raped Them, with her name in the first sentence. Dixon thumbed through the pages, finding her black-and-white photo – steely-eyed, braced – central on the page, then turned to her phone, a portal to reactions and blowback for speaking publicly about allegations of rape and sexual harassment by her former boss, the music mogul Russell Simmons. Scrolling, anonymous under her beanie, she silently cried.

The moment, captured on camera by documentarians Amy Ziering and Kirby Dick arrives about two-thirds of the way through On the Record, a HBO Max film notionally about the women, particularly Dixon, who spoke publicly of assault and abuse by Simmons. But the film offers a larger emotional window: into the experience of reprocessing buried trauma, of music careers thwarted by abuse and shame, of grappling with the weight of public knowledge and, in particular, the weight of coming forward as a black woman against a hero in the black community. (Simmons has denied all accusations.)

The film watches Dixon as she considers speaking to the Times, the consequences of reopening a wound in public and the surreality of seeing your story rehashed in push alerts and tweets. “I definitely underestimated the emotional wrecking ball that coming forward would be for me in December 2017,” Dixon told the Guardian. “I thought I was going to deposit this information in the public square and then I would walk back into my private life.”

But her relationship to her story changed; it went from information “packed away neatly in my emotional basement” to “part of the vocabulary of my environment”, public knowledge hyperlinked throughout her life – at her son’s Little League games, when she’d see a text with another disclosure about Simmons, or stopped by a woman in tears on the tears. “Suddenly this information that I had buried was now coursing through my veins,” she said. “And it suddenly became a part of my identity in a way that just transformed me.”

Part of that transformation is having one story now attached to your name – a soundbite, the top Google result – instead of every other thing you have done. “It’s quite frustrating when you see media around the film that primarily frames us through the trauma that we experienced, and not the things that we have done to move forward,” Sil Lai Abrams, an author and activist who accused Simmons of rape in the Hollywood Reporter in 2018, told the Guardian. “And so what I’m holding my breath for come the release [of the film] is to finally be able to exhale.”

Sherri “Sheri Sher” Hines, one half of the pioneering hip-hop duo Mercedes Ladies, buried the trauma of her alleged rape by Simmons in the late 80s for years. “I was the type where I wouldn’t let you see me cry,” she told the Guardian. Though she found strength in the process of speaking on the record, in the Los Angeles Times, and later in On the Record, she wondered, with the film coming out: “how is it going to feel, having my vulnerability out there in the world? When there’s so many other things to me.”

Simmons has been a fixture in the music industry since the early 80s – first as a promoter for Run-DMC, then as co-founder of Def Jam Recordings, the hip-hop label behind hits by LL Cool J, Public Enemy, and the Beastie Boys. The film focuses primarily on Dixon, who arrived in the city in 1992 and, after a couple of years in entry-level record label gigs, landed her dream job: A&R executive at Def Jam. She was talented, hungry and above all passionate; by age 24, the record she organized – a soundtrack for the rap documentary The Show, featuring tracks from A Tribe Called Quest and Tupac – went platinum.

But by that point, she says, the harassment from Simmons became relentless. He shoved her into a broom closet at a restaurant and tried to kiss her, exposed himself to her in her office. Her description of the alleged rape in 1995, after Simmons lured her into his apartment under the guise of calling her a car home, is raw and devastating, all the more gutting for the similarities – manipulation, disembodiment as a survival mechanism, spiraling shame – it shares with the accounts of other Simmons accusers. (Twenty women have now accused him publicly).

Dixon left Def Jam for Arista Records, where she shepherded hits by such stars as Whitney Houston, Lauryn Hill, and Aretha Franklin. But when L.A. Reid took over the label in 2000, she says, she was again faced rampant sexual harassment and “quid pro quo” propositions. (Reid has denied this account; he was dismissed as CEO of Epic Records in 2017 for allegations of sexual harassment). The constant stress and shame drove Dixon to leave music in 2002, in the prime of her career, and to “bury that part of myself in like a manhole.”

Though still “trying to get back to normal” throughout 2018, Dixon agreed to speak again in On the Record in large part because of Ziering and Dick’s focus on the Me Too experience for black women. With interviews from academics and activists including Tarana Burke, Kimberlé Crenshaw, Joan Morgan, and former editor of the Source Kierna Mayo, the film adds historical and cultural context to what Dixon and other Simmons survivors describe as their reluctance to tear down a powerful, beloved black cultural figure – the myth of the hyper-sexual black male that underpinned the terror of lynchings, the long history of black women putting racial solidarity before gender, the misogyny rampant in hip-hop (and, as the film notes with clips of casual sexism by Mick Jagger and Tom Jones, all music genres).

That focus was part of what convinced Oprah Winfrey to sign on as executive producer after seeing a rough cut in June 2019, thus bringing the project under her Apple TV+ distribution deal. So it was a confusing shock when Winfrey abruptly withdrew her support of the film just 15 days before its January premiere at Sundance, citing vague “inconsistencies”. (“I stand with the women, I support the women, and I do hope that people see the film,” Winfrey maintained on CBS in January). The withdrawal “blinded” the filmmakers, and created a cycle of re-traumatizing news that Dixon called, at the time, a “hellscape”. 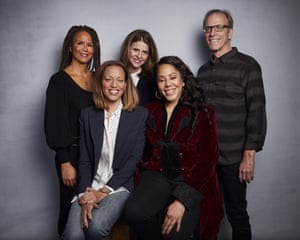 “There are no inconsistencies,” Dick told the Guardian of those reports. “These stories were reported by the New York Times, the LA Times and the Hollywood Reporter and very extensively vetted.” That process included, according to the directors, their own fact-checking team, Harpo (Winfrey’s production company) and Apple lawyers, and HBO Max’s legal team. “We are very confident and we stand behind this film, we stand behind these women,” said Ziering.

As for Dixon, “I am not at all in the same place with respect to Oprah Winfrey’s exit and Apple’s decision to walk away from the film,” said Dixon, adding that she’s “deeply grateful” to Winfrey for signing on as producer and for “maintaining her faith in our stories and her support for us as survivors. But I’m also grateful that we had the opportunity to stand together as survivors on our own two feet at Sundance.”

“I was hoping to, I think, hide behind the power and the strength and the dignity and the courage of Oprah Winfrey, which I still admire and believe in,” she said, but when the film premiered despite the distribution fallout, “I discovered we are enough, and I’m so much stronger for having survived that massive gut punch,” said Dixon.

The film received a standing ovation at Sundance, but the response from the music industry since has been, according to Dixon, Hines and Abrams, “crickets”. “While the outpouring of support has been great from a lot of people I’d never met before in the film world, and in the largely white entertainment film world,” said Dixon, “the people I’d known for 25 years in the black entertainment world have been largely silent, still to this day.”

Abrams agreed that “there’s been a silence, but also the tacit endorsement of [Simmons] that continues by people that I know. And that’s incredibly painful.” Simmons, 62, recently published a book, and continues to lead philanthropic efforts such as the Def Jam Comedy Relief Fund.

The people, who “continue to turn a blind eye, even in the light of 20 women coming forward about various allegations of sexual misconduct against Russell Simmons”, are, said Dixon, “the spoonful of sugar that helped Russell’s medicine go down”.

The alleged assaults by Simmons, the harassment by Reid – long glossed over as just part of the business, the cost of doing your job and upholding the culture – are only the tip of the iceberg, the women said. “There’s a lot of films to be made in the music industry,” Ziering added. “I hope people start making them.”