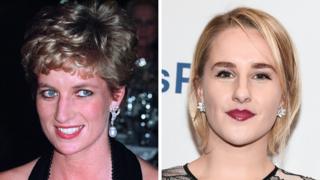 A stage musical about Princess Diana’s life is to hit Broadway next year.

Simply titled Diana, the show is billed as the story of the woman who “rocked the Royals” and “chose to be fearless, and as a result became timeless”.

It has music by Bon Jovi keyboardist David Bryan, who won two Tony Awards for his stage show Memphis in 2010.

In a review of Diana’s pre-Broadway run in San Diego, the Los Angeles Times said the show was “no more British than The Real Housewives of New Jersey”.

The lead role is taken by Jeanna de Waal, who has previously appeared in American Idiot and Kinky Boots on Broadway.

Speaking about the late princess, the actress said: “She made everyone feel special, from the highest person to the lowest ranking person, and I think we want to celebrate her.”

Songs reportedly include Snap, Click, about the paparazzi; Welcome To The Windsors; Here Comes James Hewitt, about the ex-cavalry officer who had an affair with Diana; and Secrets and Lies.

The LA Times’ critic Charles McNulty said the show was “as American as Applebee’s” – a reference to the US restaurant chain – and “has a generic quality that for all its efficient smoothness seems culturally misplaced”.

He added: “The tone is ironic, the pulse is fast-moving and the tragic ending isn’t milked for tears. The show doesn’t work, but that hardly matters these days for a musical that can draw in the tourist masses.”

The Hollywood Reporter decided the musical “seems to have many of the pieces needed for a hit”.

Reviewer Deborah Wilker said: “While the Royals themselves may be aghast at the thought of actors portraying them half-naked in bed on a stage, the British public would probably eat it up.”

Prince Charles will be played by Roe Hartrampf. Performances will begin at the Longacre Theater on 2 March next year, with an official opening date set for 31 March. No UK performances have been announced.

A separate show titled Call Me Diana is staging a one-off showcase in London’s West End next month in an attempt to raise funds for a full production.

News of the Broadway show comes four months after Netflix cast newcomer Emma Corrin to play the Princess of Wales in The Crown.

Netflix announced on Monday that the third series of the royal drama will begin on 17 November. It will cover the years 1964-1977, meaning Diana will not be seen until the fourth season.

Naomi Watts played Diana in a widely-panned film on the big screen in 2013, making $21m (£17m) around the world, according to Box Office Mojo.