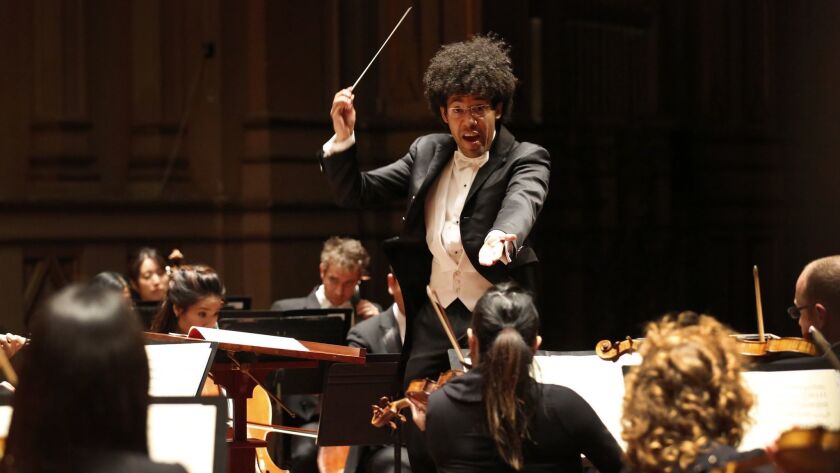 The Los Angeles Philharmonic might be in the ear-catching center of it all, but this fall — whether north or south, east or west, or near or far from DTLA — new music directors throughout Southern California are promising new symphonic eras. Last month Jaime Martín at Los Angeles Chamber Orchestra and Anthony Parthner at the San Bernardino Symphony took the reins.

Saturday night brought more notable newbies: The 45-year-old American conductor Michael Christie began his tenure at the New West Symphony of Thousand Oaks, and 39-year-old Venezuelan Rafael Payare did likewise at the San Diego Symphony. Both orchestras are embracing the mission of refreshing the modern concert experience for a new generation. Even so, in both cases, the message seemed to be: Come for something new but stay for the real thing.

Saturday night at Fred Kavli Theatre, Christie began with kazoos, brought in the Marcus Roberts Trio to spice up Gershwin’s Concerto in F, and turned intermission into an imaginative entr’acte. But he overpowered all that came before with an original interpretation of Rimsky-Korsakov’s potboiler “Scheherazade,” supplying far and away the most spectacular playing from what should no longer be considered a regional symphony.

Christie’s career trajectory to New West does not appear to be altogether upward. In the 1990s, he was briefly an assistant conductor at the L.A. Phil. He’s had posts at the progressive Brooklyn Philharmonic, Phoenix Symphony (which he enlivened) and Minnesota Opera (where he premiered award-winning operas). His Santa Fe Opera recording of Bates’ “The (R)evolution of Steve Jobs” won a Grammy this year.

The kazoos came from John Corigliano’s “Salute,” a fanfare written for Christie’s first concert of the Brooklyn Philharmonic in 2006. You don’t see what’s coming when the full orchestra unexpectedly plays them. A smile is not a bad way to start.

Inviting the Marcus Roberts Trio to take command of the original piano solo in Gershwin’s Concerto in F is not exactly a novelty. A quarter-century ago Roberts himself jazzed up what Gershwin wrote with robust imagination. The concerto, which the trio first tried with the Berlin Philharmonic at Seiji Ozawa’s invitation, adds issues. The pianist’s bold, bluesy and bravura solos still compel. But both the score and the addition of a trio are a more delicate balancing act.

When the trio is interesting, the orchestra become secondary; when the orchestra wants to be interesting, the trio becomes commandeering. Roberts respectfully skirts between Gershwin and Roberts. But the cautious trio-ized version, neither symphonic here nor jazz there, came across as less audacious than the L.A. Phil’s fully symphonic performance two nights earlier of the concerto with pianist Jean-Yves Thibaudet.

Christie’s intermissions now work like this. Hit the lobby if you like but in the hall, he will offer a 10-minute talk and audience Q&A with the soloist(s), a 10-minute bathroom break (good luck with that) and a short modern work as an entr’acte discovery, on this occasion Kevin Puts’ schlocky “… this noble company.”

But the “Scheherazade” was something else altogether. For one thing, it had concertmaster Alyssa Park for the violin solos. The secret to several of our regional orchestras, and especially the New West, is that they include many musicians from L.A.’s new-music scene, such as Park, and from the film studios, which means some of the most flexible and hip players anywhere. And Christie knew just what to do with them, bringing out Rimsky’s lurid textures as though newly colorized.

As anticipated from his sensational appearance with the orchestra in January, Payare has produced great expectations in San Diego. Like Gustavo Dudamel, he is a product of Venezuela’s El Sistema, and he played under Dudamel as principal horn of the Simón Bolívar Youth Orchestra. Also, like Dudamel, his mentors included Jose Antonio Abreu, Claudio Abbado and Daniel Barenboim. He was a Dudamel fellow at the L.A. Phil and, as music director of Northern Ireland’s Ulster Orchestra, quickly became a star in Britain and beyond. He is electrifying in front of an orchestra. Put an electric guitar in his hands and he would look like a rock star. San Diego snaring him is a very big deal.

He is already enticing a younger crowd. With the apartment-building boom gentrifying the business district where the orchestra performs (in a renovated movie palace embedded in a bank tower), the area is losing its weekend dreariness. But in some ways Payare may even be too winning, given how good a job he did selling “Alternative Energy” to both a young and not-young audience.

The score, which Bates calls an energy symphony, was written eight years ago for the Chicago Symphony, and it chronicles more than three centuries through tuneful melody, a percussion section that adds found items and a laptop for tapping out techno embellishment. We begin with Henry Ford in 1896, move on to present-day Chicago, then shift to China a century later, when the Earth has been wiped out with runaway energy production. Finally, in 2222, we find ourselves happily reclaiming our back-to-nature, post-apocalyptic, primal roots in the climate-changed Icelandic rainforest.

Payare made this rose-colored spectacle of environmental opportunism pop. But we can’t dance our way out this crisis with an affable beat or with electronica-appropriated traditional Chinese music.

Saddled with an acoustically uninvolving hall, which will soon undergo some renovation, the orchestra has begun experimenting on occasion with large video screens to help focus attention. I found them irritating during the Bates, showing gimmicky percussion like a Ford radiator that didn’t do much sonically. Too much irrelevant information.

But in Mahler’s big symphony, the screens stopped being bothersome. When the music comes alive, so does the hall. Acoustics and video screens lose importance.

Payare’s approach to the Fifth is riveting celebration. It begins with a funeral march and tries, over 70 agitated, crazy and consoling minutes, to recapture love and life. Death is glory. Pain and suffering are life-affirming. The Scherzo loses its mind and finds it again — barely.

Mahler is believed to have written the famous Adagietto movement for strings and harp as a lithe love letter to his wife, Alma. These days, though, it has been slowed down and puffed up to become the go-to music for teary-eyed memorializing when something more substantial than the Barber Adagio is needed.

Payare took it memorializingly slow, but sensually, not wanting the lovemaking to stop. That was arresting. The upbeat Finale is always a problem with its alternate energy. For Payare it was just plain big and splashy, not so much triumph as time marching on, the apocalypse being what we will make of it.