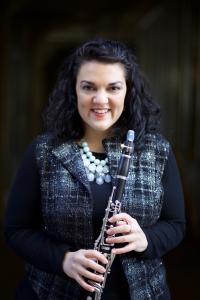 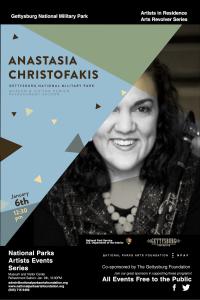 It allows…the performer, and the audience to connect to what has happened in a very real way, humanizing all parties being represented”

GETTYSBURG, PENNSYLVANIA, UNITED STATES, December 20, 2017 — Gettysburg National Military Park, in partnership with the National Parks Arts Foundation (NPAF), is welcoming Dr. Anastasia Christofakis, an acclaimed clarinetist and music educator, as the first Gettysburg Artist in Residence in 2018. Christofakis will spend a month on the Gettysburg battlefield, working and composing music. Dr. Christofakis will also perform a free public lecture recital at the Rotunda at the Gettysburg National Military Park Museum and Visitor Center at the Park on January 6, at 12:30 p.m.

The lecture recital (for clarinet and with piano by Liz Hill) will focus on her recent exploratory project into the roots of American Folk Music, and will feature works by Leonard Bernstein, George Gershwin, and Joseph Horowitz, as well as a new work specially commissioned for this series by Jamie Whitmarsh called No Progress Without Loss. The event is free and open to the public, thanks to sponsorship from the Gettysburg Foundation.

A clarinet soloist who works with major orchestras, Dr. Christofakis is known for her expressive performances of Aram Khachaturian and other demanding classical and modern pieces. Her love and knowledge of music is extensive and compelling. Aesthetically, she feels deeply connected to the challenging but powerful music of Shostakovich and dense but intimate textures of Brahms: “Brahms amazes me with his ability to use small ensembles in a large symphonic way. His use of the different instruments and the way he gets their sounds to compliment and contrast each other is astounding.” Anastasia received her Doctor of Music degree in Clarinet Performance at the Florida State University, her MA in the same from Roosevelt University and a B.A. in Music Education from James Madison University.

Dr. Christofakis plans to hone new material for performance during her residency, which she sees as a unique opportunity for artists to work in place and connect to the wider and unique public such as seeks out the park and its memorials at Gettysburg. “This combination of cultures and people that have created such a diverse country have also developed into their own musical identity. Music manages to fuse all those stories together in this organic and inclusive way. Gettysburg, represents to me a point in history where people stood up to acknowledge just that, the beauty in diversity. At a time where there is so much cultural tension, I think it’s important for us to look at and celebrate what diversity is and the beauty that can come from it.” She is also an advocate of new music and believes strongly in the commissioning of new works. Her new music ensemble What is Noise has performed extensively in the United States, premiering and commissioning works by composers such as Frank Pesci, David T. Little, Lansing McLoskey, and Don Freund. She has also extensively studied the music of Armenia, and particularly the mysterious, ‘human-voiced’ cousin of the clarinet, the Duduk.

A native of New York City, with strong ties to her cultural roots as the daughter of Greek immigrants, Christofakis reflects that this has an enduring and subtle pull to the pieces she chooses along with the chamber ensemble she co-founded, Meraki. As Christofakis explains, “There’s so much of the Greek culture that resonates within me, and I’ve noticed now, especially that I am creating my own projects and able to direct my career in a way I would like, that I do tend to gravitate towards things like that combine that culture and similar cultures with the one I live in.”

Along these lines, Meraki is a collaboration of musicians designed to explore lesser known but distinct musical cultures that have some tight personal connection to the composers themselves, and is dedicated to using music to make a greater social impact. As Dr. Christofakis elaborates on the social aspects of performance and teaching: “The pieces we play are classical in nature, but heavily influenced by the folk idioms of the composers’ native countries. It allows us to share these stories with our audiences, and to learn about new places and people. Most importantly, I think that sharing music in this way allows for a deep connection to the people and events behind the music. It allows you, the performer, and the audience to connect to what has happened in a very real way, humanizing all parties being represented.”

The program is offered thanks to the input and support of the National Park Service and the Gettysburg Foundation whose joint efforts make the park the foremost visitor destination for those interested in the epic history of the American Civil War.

The National Parks Arts Foundation is a 501(c)3 non-profit dedicated to the promotion of the National Parks through creating dynamic opportunities for artworks that are based in our natural and historic heritage. All NPAF programs are made possible through the philanthropic support of donors of all sorts ranging from corporate sponsors, small businesses, and art patrons and citizen-lovers of the parks.