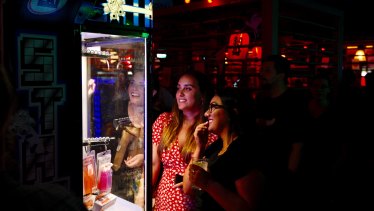 At the East Village Hotel in Balmain, live music is only permitted on Fridays, Saturdays and Sundays, and “no rock bands [are] to be engaged” at any time.

Jacoby’s Tiki Bar in Enmore, which was named TimeOut Sydney’s bar of the year in 2018, is banned from hosting live music under its licence, and drinkers cannot order more than one shot or energy mixer at a time.

At the Stoned Crow in Crows Nest, “the type of music played on the premises is to be limited to jazz and rock & roll”, while the amplifier “must be set at five (5) on the calibrated scale on the equipment”.

Goros, a Japanese bar in Surry Hills, said it risked additional licensing regulations if it hung up a mirror ball.Credit:Dean Sewell

And at the Belmore Hotel, “no entertainment of any type other than amusment [sic] devices shall be provided after 12:00 midnight”.

Labor’s spokesman for the night-time economy John Graham said the “archaic” restrictions must be removed. He gave notice of the Right to Play Live Music bill just before Parliament rose for the year and said it would be drafted over summer.

“It’s possible there was some jazz aficionado deep in the bowels of Liquor and Gaming who has imposed these conditions,” he said. “It has to stop.”

Mr Graham said the bill would give musicians a “right to play” and make it impossible for a liquor licence to forbid live entertainment. Restrictions could remain on the days or times when music is allowed, as well as the decibel level permitted.

“We should regulate the noise, not the music,” Mr Graham said. “You can’t be too noisy, but it won’t be possible to ban live music.”

Premier Gladys Berejiklian last week confirmed the 1.30am lockout laws in Sydney’s CBD would be scrapped from January 14 in a bid to revitalise the city’s ailing nightlife.

Earlier this year a cross-parliamentary committee said “unnecessary” restrictions on live music should be scrapped and in its formal response last week, the government agreed.

The Minister for Jobs, Investment, Tourism and Western Sydney, Stuart Ayres, said a thriving music scene was pivotal for a dynamic, 24-hour economy.

“I’ll be working with all stakeholders to ensure we have the right conditions so live music isn’t just welcome in Sydney but is fundamental to its economic and cultural success,” he said.

“This isn’t about flicking the switch on lockout laws and thinking our job is done. We all need to work together as Sydney fully embraces the opportunities of a true 24 hour economy.”

Mr Graham said the bill would also give councils the ability to remove certain conditions from a development application. “It will give them power to say these are not allowable matters. In a DA, you can’t say ‘jazz music only’.”

But neighbourhood associations were sceptical of the planned changes. Helen Crossing, who convenes the 2011 Residents’ Association and owns a decibel meter, said the desire for more live music was often “a disguised plea for more booze”.

“Nobody wants to listen to someone else’s music,” she said. “What’s appealing to one person is a nightmare for another.”

The requirements also apply to liquor licences outside Sydney. At the South Dubbo Tavern, live entertainment “is to be confined to solos, duos, small cover bands and country and western music”.

At Tamworth’s Longyard Hotel, bands and their amplification equipment must be “arranged and operated so as to direct the sound in a generally southerly direction”.

And at the Wharf Rd Restaurant and Bar in Nowra, on the south coast, “there is to be no disco type entertainment on the premises and the only entertainment permitted is a guitarist and keyboard player or the playing of compact disks [sic] of a ‘soft’ rock and roll nature”.

Earlier this year, Surry Hills restaurant and karaoke bar Goros said it could not hang a mirror ball inside the venue because it would risk being classified as a nightclub and would be forced to remove glassware.

In 2014, a District Court judge had to interrogate the meaning of the term “rock music” in the course of dismissing 14 convictions against the Terrigal Hotel for breaching the “no live/rock music” condition imposed on the venue at that time.

Michael Koziol is a political correspondent for The Sydney Morning Herald and The Age.