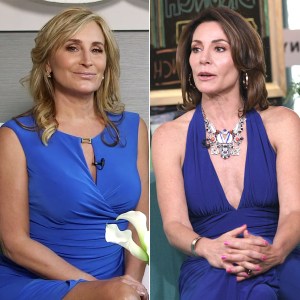 Luann de Lesseps isn’t the only chanteuse in the Real Housewives of New York City cast! Sonja Morgan is one of the reality stars featured in Fiber One’s new “Work Done” music video, and she had no hesitation about singing her lines the song.

Former ‘Real Housewives of New York City’ Stars: Where Are They Now?

“Listen, when they called me, Fiber One … they were like, ‘Do you sing?’” Morgan, 55, exclusively told Us Weekly. “I’m like, ‘Of course I sing. I do everything. I write my own sing-song skits and I do whatever.’ I was saying to myself, ‘I didn’t say I sing great. If Luann can sing, I can sing.’”

Speaking of de Lesseps, the former countess was admittedly self-absorbed this season of the Bravo show as she pursued a cabaret career while recovering from alcohol struggles. And at one point, de Lesseps, 54, persuaded Morgan to accompany her to an AA meeting.

“God, it was terrible,” Morgan said of the drama this season. “I was upset because Luann was being very about herself — taking care of herself and being sober — and then projecting her life on me, saying, ‘Well, maybe you have what I have?’ I’m like, ‘I’m fine. You just worry about yourself.’ Bethenny [Frankel] felt not appreciated. I felt like I was being treated like a fan. Barbara [Kavovit] felt like Luann wasn’t there for her.”

One costar who did have Morgan’s back, however, was Bethenny Frankel, who helped Morgan after the fashion designer hit her head during a night partying in Miami. “We’ve gotten so close that she’s kind of there for me through it,” Morgan said. “She wanted to be there because she thought, in that moment, she was there for everyone. … She is very upfront and there for you when you need her.”

“What I like about New York is that we really care about each other,” Morgan told Us. “At the end of the day, we’re doing yoga. We’re getting massages together. We’re eating well. Bethenny’s doing the cooking. And we regroup and if we think somebody needs to get therapy, or go do yoga, or go to AA, we are to just say it. It doesn’t necessarily mean it’s true, but if it helps you reflect on yourself and say, ‘Well, what can I do to make myself better?’ Maybe I need to do more yoga and go to church and Luann needs to go to AA. This is the thing, we all have our way of coping with stress in life.”

With reporting by Brody Brown