While Covid-19 has canceled countless tours and live events for the foreseeable future, the pandemic doesn’t mean performances have to come to a halt. Singer and actor Rob Mayes (A Soldier’s Revenge, Mistresses) has teamed up with UK media collective Destination Country to host CouchSongs, a seven-hour virtual concert that will feature over 40 country acts live from their homes on May 30.

The show kicks off at 3 p.m. ET via Facebook Live on May 30, and includes a wide array of talent in the country community. Gretchen Peters, a revered singer-songwriter and 1995 CMA Song of the Year Award winner, is scheduled to perform as well as country acts Lainey Wilson, Tyler Rich, American Aquarium, Ruthie Collins, Emily Hackett, Emma White and many more.

A frequent Stagecoach Festival attendee, Mayes conceived the initial “couch concert” idea in April shortly after the California-based music festival was postponed. “I figured why not make our own lil’ virtual fest, call it stagecouchfest.com, and help support artists during quarantine through donations,” he tells me. “It grew from just me and a couple friends to well over four dozen artists and songwriters playing their music on two concurrent stages, just like at a real festival.”

Over 20,000 music fans tuned in on April 25 via stageit.com and Facebook Live. With such a positive response, Mayes decided to bring back the concept with a revamped name and new lineup for the May 30 edition.

“I believe there’s a need and a want for this type of thing right now. Even with the stay-at-home orders starting to relax, we want music, we want community, we want a reprieve from the uncertainty and stress,” Mayes says. “Music gives us that solace. Things aren’t going back to normal for a while, if ever, and live concerts might be the last to recover, so in the meantime, if we can continue making music and sharing it and helping to support the artists and songwriters behind the music during an unprecedented and uncertain time, and help support them ‘from our couch to yours,’ I’m all for that.”

The virtual concert is donation based with all money raised distributed equally among the performers. CouchSongs is giving countless artists who are stuck at home with no shows on the schedule the ability to perform and connect with music fans across the world.

“Doing something that makes me feel like I’m a part of something bigger, the way that festivals do, is good for my well-being right now,” explains CouchSongs performer Emily Hackett. “It gives me a reason to keep polishing that performance, knowing that somebody is being given a place to listen who might not have heard me before.”

For more on CouchSongs, visit the festival’s website. A complete lineup is below. 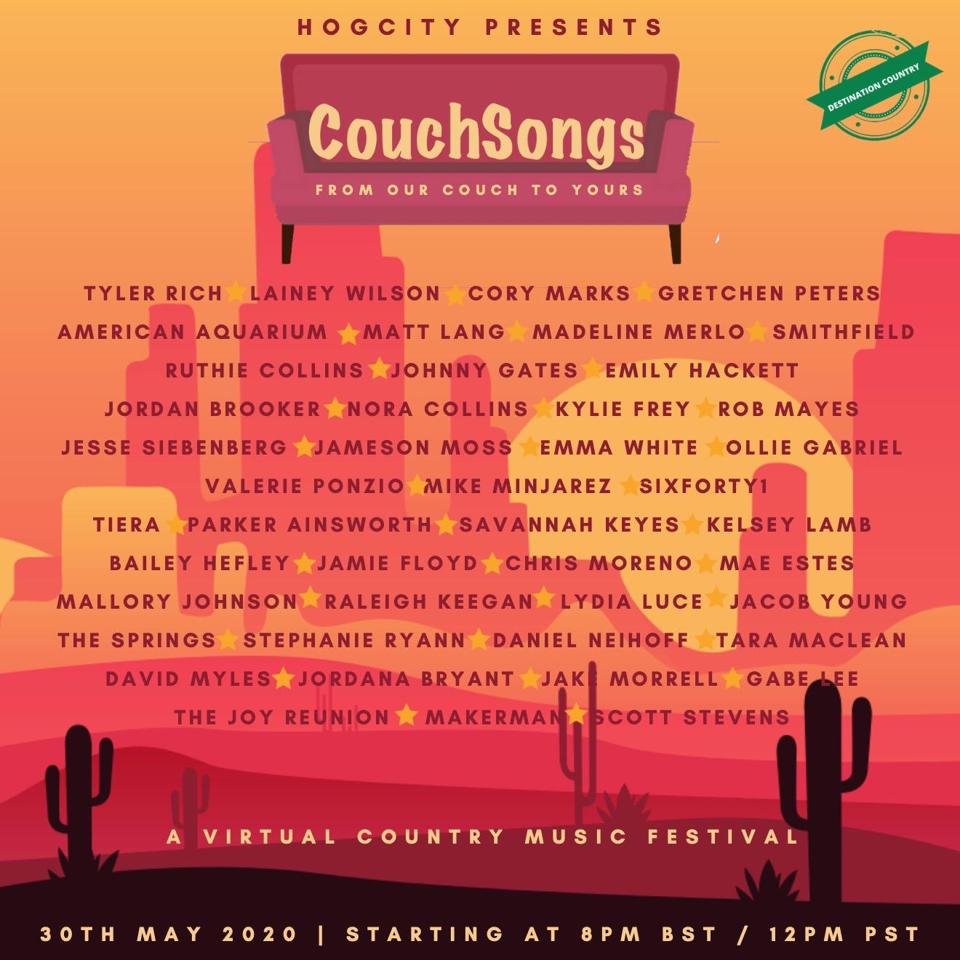