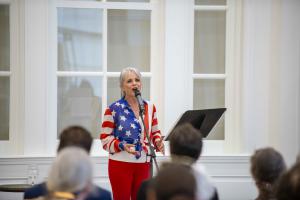 L. Ron Hubbard, the founder of Scientology was himself a naval veteran and an accomplished musician”

CLEARWATER, FL, US, May 30, 2019 — On Saturday, May 26th, noted performer Joanie Sigal presented a stirring and inspiring musical performance to a packed Scientology Information Center in downtown Clearwater.

Following a light reception at the start of the event, Ms. Sigal gave the history of Memorial Day explaining that it was originally known as Decoration Day; it originated in the years following the Civil War and became an official federal holiday in 1971.

Ms. Sigal then performed songs from many genres which she felt demonstrated the freedoms, qualities and values that we hold dear as Americans. Some of the genres included country, blues, jazz, pop as well as songs from Joanie’s signature repertoire from popular musicals such as Cats and Phantom of the Opera.

One song that was the most emotionally impactful for the audience was, God Bless America by Lee Greenwood where attendees stood and joined in singing the chorus, “I’m proud to be an American, where at least I know I’m free…” Afterwards one guest, Sophie Krekich said, “I cried! That’s one of my favorite songs.”

“After Joanie’s spring concert in April of this year, her fans clamored for her next performance date,” said Amber Skjelset, manager of the Scientology Information Center. “Considering the demand and Ms. Sigal’s family’s extensive military background – it was only fitting for Joanie to return and perform our special Memorial Day Concert.”

“Music and artists have a way of bringing people together,” said Ms. Sigal. “L. Ron Hubbard, the founder of Scientology was himself a naval veteran and an accomplished musician,” said Ms. Sigal. He also was a big supporter of the arts and artists – once writing ‘A culture is only as great as its dreams, and its dreams are dreamed by artists.’”

To learn about upcoming cultural events at the Center or to learn more about the Scientology Information Center, please contact Amber at 727-467-6966 or [email protected]

The Scientology Information Center, located in the century-old Clearwater Building in downtown Clearwater, opened on July 11, 2015, and currently houses a gallery of audiovisual displays with some 400 videos. The Center is open to all and provides a self-guided tour showing basic Scientology beliefs, Churches around the world, ongoing social programs and the life of L. Ron Hubbard, Scientology’s founder. The Center offers tours to the broad public and civic leaders; holds concerts, theatrical performances and receptions for the community; and opens up the use of its conference room to social, civic and non-profit groups.