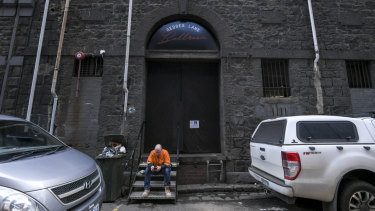 A Facebook post made by the venue manager two weeks ago said Vue Group made a decision in early August to “cease operating” on September 1.

The venue closed down at the end of August.Credit:Eddie Jim

“After two weeks going back and forth with Grollo, [we] have been unable to come up with a solution for the venue’s future … our last show will be on August 31st,” the post reads.

A letter dated September 2 from Vue Group director Nicki Larkin informs an employee they will no longer be required.

“Vue Group has decided to implement some changes to its operations. While Vue Group has done its best to make Geddes Lane Ballroom a success, we believe the change in operational practice will lead to better outcomes for the venue and customer,” Ms Larkin writes in the letter.

One person familiar with situation said the sound system and audio technical equipment had been taken from the venue over the past week.

Former Geddes Lane staff blamed the venue’s closure on poor ticket sales and a revolving door of managers, including several with no live-music experience.

Ben Thompson, Geddes Lane’s original booking manager, said Vue Group had “no clue how to run a live music venue and wouldn’t listen to anyone that does”.

“I’m disgusted at the way [Vue Group] messed with the local live music community,” said Mr Thompson, who resigned earlier this year due to concerns over the venue’s management.

Melbourne musicians Jazz Party claim they have not been paid $10,000 for five shows they played in July.

“We have already paid our technicians and band members, so the band is well and truly out of pocket at the moment,” said Jazz Party’s Jesse Lubitz.

“Really disappointing situation to be in, and really hope it’s resolved soon.”

Band Hollywood Real Thoughts said they had not been paid after performing at the venue on July 18.

After being contacted by The Age, Bennett insisted Geddes Lane had not closed. “Once again rumours and innuendo rubbish, Geddes Lane is not closed,” he said.

Bennett said he was not responsible for paying musicians, but insisted that all artists had been paid.

“If one or two artists are claiming they have not been paid this is a normal procedure of contacting the booking agency. … It’s a lengthy process but needs to be done in accordance with best practice and can’t be rushed. This is standard procedure in all live music venues in Australia.”

Future events on the venue’s Facebook page have been cancelled and the phone went unanswered on Thursday and Friday. The owner of one neighbouring business said they had been informed the venue had been shuttered.

However, Bennett said Geddes Lane would be changing its business model and was focusing on private events, including album launches. “We have loads of events coming up in the summer season.”

The Vue Group also said the venue was available to hire for “any artist that wishes to use its unique and spectacular space”.

The Grollos own the Rialto Tower which houses Bennett’s flagship restaurant Vue de monde and have a long running relationship with the high profile chef.

Bennett acts as a creative consultant for Vue Group, since selling the majority of the company to Singaporean Far East Organisation in 2016.

Bennett confirmed discussions for a sale of one restaurant, Jardin Tan, had taken place recently, and also admitted Japanese diner Iki Jime was on the market, but he strongly denied that Vue de monde was on offer.

Paul is a reporter for The Age.