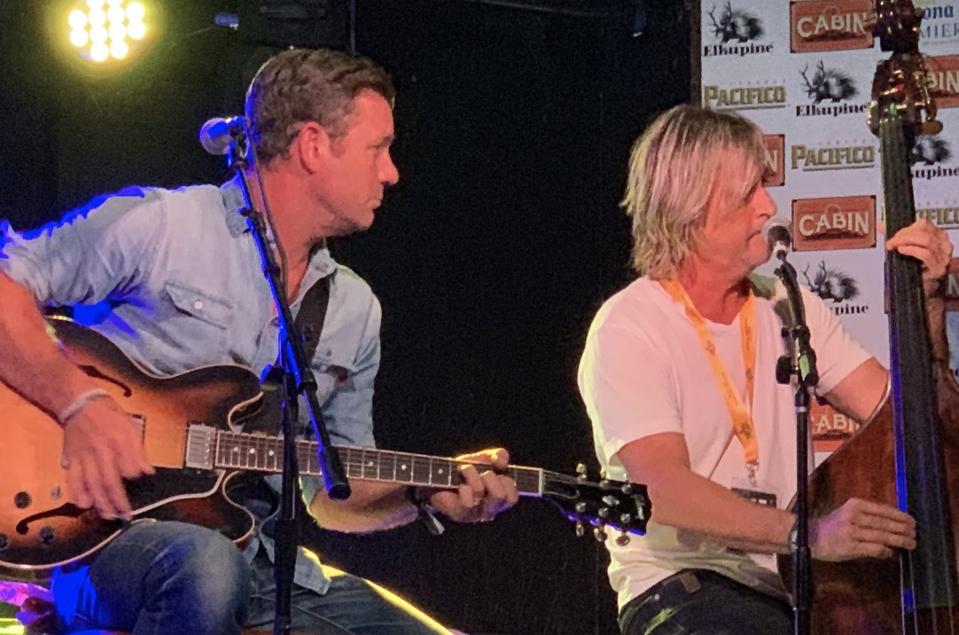 The Side Deal performing at Park City Songwriting Festival.

Charlie Colin was holding his upright bass, talking about a diner he used to long ago visit to write songs. At this moment, there are about 100 people in The Cabin bar, which is 7,000’ high in Park City, Utah.

“The sad part,” said Charlie, “Is that there was a waitress that was in this diner… I saw her literally put out a grease fire while the tough guys in the kitchen were standing around and watching. I saw her talk a couple out of having a fight. She just had these extraordinary powers as a human being of doing the right thing.

“And then when I came home from a tour once, I found out that she had actually committed suicide. It was the saddest thing ever. We were trying to find out why, and her friends said she was getting older and she was disturbed that she was like, just a waitress. It was super sad, because everybody adored her. And if she had any idea how much people admired her and loved her, things could have been different. So, she’s kind of immortalized in this song.”

The song is Meet Virginia, made popular by the band Train. Charlie played it this evening with a new band, The Side Deal, that includes Stan Frazier of Sugar Ray, and brothers Joel and Scott Owen of The Pawn Shop Kings.

Stan Frazier then spoke about being at the very edge of utter failure—terrified by that prospect—when the idea came to him for the song Fly, which became the band Sugar Ray’s first hit. The song seems up-tempo and light, but he confessed there is much darkness behind its birth.

As I type this, we are halfway through the inaugural weekend of the Park City Songwriter Festival, one of those spectacular ideas that makes you scratch your head and wonder why someone didn’t think it up 30 years ago. It’s the brainchild of O.P. Rockwell co-owner Scott Thomson, Nashville Unplugged producer Aaron Benward, and Ben Anderson, president of the local music nonprofit, Mountain Town Music.

Benward told me he wants to create the best mountain music festival, period, but listening to the co-founders—and dozens of performing songwriters—talk, it’s clear something bigger is happening here.

Songwriters move through our world just as you and I do, but they are constantly sampling life’s most powerful moments. They seek to define what makes us truly human, and to capture those moments in such compelling fashion that we want to experience them again and again.

Marc Broussard and his dad Ted Broussard performed after The Side Deal. Marc spoke about a song he wrote about his son, Gibby, who “stands about three foot tall and has bright red hair,” one of many examples of the powerful role family plays in Broussard’s life.

There was BMI’s Songwriter of the Century, Even Steven, who said he was writing so many songs with Eddie Rabbitt that when the condo next to Eddie became available, Even moved in next door… and then they installed an intercom to help them write more songs, faster.

Performer, songwriter and spectacular guitarist Sinclair told us her family didn’t attend her wedding, so fellow songwriter Steve Seskin walked her down the aisle. When you see the two of them perform together, you are witnessing a true human moment unfolding in real time.

By the way, Seskin has been here the entire week, visiting all the local schools and working with kids in a collaborative process in which they collectively write a song.

Listening to songwriters Danny Myrick, Earl Bud Lee, Matt Warren, Phillip White, Rick Brantley, Megan Linville and so many more talk about how songs come to them, it becomes clear to me that songwriters offer a wonderful example of how we all should move through this world: paying close attention.

Songs (translation = human moments) come from loss and love, yes, but also from a chance encounter or an offhand remark. They come from anything that makes us feel alive or feel the loss of something we should have cherished.

This festival shatters the barrier that often exists between performers and audiences. Here, you sit around on couches and chairs and hear the back story before the song gets sung. The festival is more of a relaxed mountain town hangout than anything else, and it’s so easy to grab any writer or performer and ask your question… or just say thanks.

I’m pretty proud of my ability to say things concisely, but the Park City Songwriter Festival is so rich with rewarding and emotional experiences that my words have barely scratched the surface of why you want to launch an annual habit of attending.