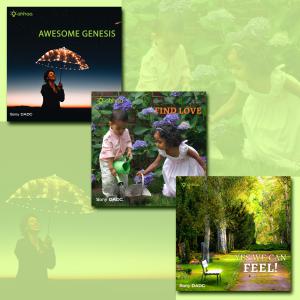 A company based out of New York & Pune, Ahhaa partnered with Sony DADC & launched three of their albums that Sony DADC has distributed to different global streaming platforms including Itunes, Spotify, Saavn, Gaana, Amazon, and Tidal etc.

Their first album “Yes We Can Feel” went live in November and is already widely acclaimed. This was the setting stone for a deeper working relationship between Sony DADC & Ahhaa. The partnership then went on to release two more albums “Awesome Genesis” & “Find Love”.

Each of the album tracks ranges an average duration of 3-4 mins. They can induce people to feel livelier & happier when performing daily routine activities.

Tracks like “We Can Commute Awesome”, “We Can Sleep Awesome” and “We Can Cook Awesome” are quick-help tracks that help people to find a renewed sense of living & purpose while going about their daily lives. In the same context tracks like “Hurt to Love” and “1ne” strike a deep chord with listeners, helping people to feel profound inner peace & clarity.

Ahhaa founders Diane Bacchus & Ashwin Srisailam take people through simple understandings, insights & practices that are relevant to people from all walks of life accompanied by music that sets the tone for transformation. The music has been produced by Karan Grover – Producer for movies like Jugni, One Heart, Dhoop.

Sony DADC from Mumbai India has been deeply involved in laying out a longer roll-out plan for the greatest impact and is now in the process of initiating special emotional excellence campaigns on various platforms. Jojie Mammen, Business Head of Sony DADC said “Having worked with several Indian spiritual leaders and organizations, Sony DADC has established itself as a content leader in the health and spiritual wellness space. However, this is the first time we are working with such unique emotional well-being content which is why we are excited and motivated to see this partnership flourish”.

Emotional Wellbeing is a big need today & access to it is very limited. Ahhaa is on a mission to bring it to one & all – this is the passion that Diane & Ashwin carry every day with a team of people from Pune & New York. Ashwin, a former monk of 19 years and Diane, a mom who is all about growth and service are well poised to carry out this mission.

Additionally, Ahhaa has created wellbeing zones in companies and colleges. They are known as Ahhaa Spaces. Ahhaa also has a range of products launching in the near future that cater to sleep, stress & much more.

Ahhaa’s mission is to help every human on this planet have the tools to deal with any kind of internal suffering whether it’s stress, depression, anxiety, anger, loneliness etc… towards living a life of happiness and feeling awesome about oneself. We believe that with more partnerships like Sony DADC this can be accomplished.