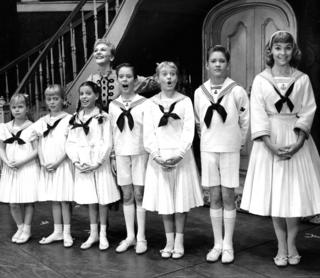 Mary Martin, Lauri Peters and the rest of the child cast of the original 1959 stage show.

It’s 60 years since theatre audiences first heard The Sound of Music. The story of the Trapp Family Singers went on to become the most profitable film of the 1960s – but first came the stage version, now obscured by memories of the Julie Andrews mega-hit. One of the original cast remembers the show as a powerful experience.

The opening scene of The Sound of Music remains fixed in Tim Crouse’s mind. But he’s not recalling Andrews striding across the Austrian Alps in the 1965 movie.

As the son of Russel Crouse, who co-wrote the stage version with Howard Lindsay, he was in the audience for a Sunday run-through for Broadway insiders. It was 1959 and he was 12. The show was without decor and the Rodgers and Hammerstein songs were played on a piano.

“The play starts with Maria in a tree – although for this performance it was a step-ladder. So the actress Mary Martin enters, climbs a couple of steps and sings the title song – The Sound of Music. It was quiet and moving and I think everyone concerned knew they had a success.”

The show opened at the Shubert Theatre in New Haven on 3 October 1959, opening on Broadway the next month.

Julie Andrews in the 1965 film, which has all but obscured the Broadway original.

Lauri Peters is one of the remaining members of the original theatre cast. She played Liesl, the eldest of widower Captain von Trapp’s children who get the trainee nun Maria as their new governess. Each evening she watched the opening scene from the lighting booth.

“I loved it. Night after night Mary Martin performed it wonderfully. The music was sumptuous and so joyful: there would be a hushed quality in the audience.”

Peters says she’s never seen the film but she knows the famous swooping helicopter shot it begins with. “It’s beautiful of course but in the play you feel you’re dipping into the privacy of someone’s heart – it’s powerful and spiritual. The film is different.”

Lindsay and Crouse were leading Broadway playwrights of their day. Their idea had been to do a stage version of the 1956 German film The Trapp Family. Tim Crouse says music always featured in those plans.

“There’s folk music and some classics in the original and they were going to use that on stage. Then someone had the idea of asking Rodgers and Hammerstein if they’d supply a couple of supplementary songs. Dick and Oscar weren’t interested but they said they would write a full score.”

There have always been people who thought the story too sentimental. Crouse says they fail to see what underlies the action.

“There are light things in it such as some of the songs. But it has the serious theme of how to find your purpose. The Mother Abbess says to Maria, the young nun who becomes governess to the children, that she has to find the life she was born to lead.

“That’s the show in a nutshell and it connects with the idea of moral agency. If your nation is taken over by bad people who impose evil policies, do you just participate in that or do you stand up against them?

“And they wrote about the transformational power of love. Neither Maria nor Captain von Trapp is the same person at the end of the play. So for people who think the story is lightweight, it just isn’t.”

Ted Chapin is Chief Creative Officer for the Rodgers and Hammerstein organisation in New York. Part of his job is to ensure R&H classics are continually reinvented for new audiences.

He accepts that no stage production of The Sound of Music will totally satisfy audiences expecting the cinematic sweep of the film. “But this is complicated because the film means the show has easily the biggest brand recognition of any R&H show.

“The last big US tour was in 2015 and the director Jack O’Brien went right back to the original text. Productions over the years had incorporated songs and ideas which come from the film but dropping all that was a revelation.

“Audiences know there’ll be references to the Nazis in the show but they don’t expect the politics to be central. But for instance Jack reinstated No Way To Stop It, a powerful song about standing up to people in power who are doing bad things.

“Or take Do-Re-Mi, which in the film is a jolly number where the kids dance and sing on a gorgeous Alpine meadow. But on stage it plays indoors and it’s where Maria has to win over these stubborn, resentful children who really don’t like her. It’s not all sweetness.

“Maybe it was inevitable that Hollywood made it more into family-friendly entertainment that would work around the world. And in a business sense I shouldn’t complain.

“The Sound of Music is the show which gave Rodgers and Hammerstein a ticket around the world. When China started to open up it was always the show people asked about. Clearly that had to do with the film.”

The last production on Broadway was in 1998. The most recent staging in London was in 2006, starring Connie Fisher.

Crouse went on to be a successful writer himself. He well remembers accompanying his father into a screening room in 1965 to see the film, which Russel Crouse had had no part in adapting.

Captain von Trapp and his girlfriend, the Baroness.

“When the lights went up I looked at my father and his face was red and he was in shock. The film had erased many of the play’s strengths – and the politics of the play had been emasculated. In his story there’s an important point where the question is asked, ‘Can you cooperate with the Nazis?’ In the film that all but vanishes.”

Peters was 16 when she was cast in The Sound of Music. Her character Liesl falls in love with Rolf, who then signs up as a Nazi.

Peters’ big number was Sixteen Going On Seventeen. “I thought the song was very true and it certainly described me. I really was young and naive. But Liesl is also on the cusp of understanding something more of life and about connections between people. I think that’s what Rodgers and Hammerstein often wrote about – the importance of connection.”

Most of the Broadway songs were re-used in the later film.

But Peters says six decades on what she remembers above all isn’t the dialogue or the songs – it’s the lighting.

“It’s an extraordinary thing to be so drenched with light. It was staggering and thrilling and a little disorienting. But to be surrounded by light and to hear wonderful music from the pit had a real spiritual quality.

“The emotions in the play are profound but you have to be open to them. But the Sondheim moment was approaching and the sophisticates never really approved. Mr Rodgers could connect music to the heart and Mr Hammerstein connected words to the soul and those are rare gifts.”

Peters stayed with the show for two years, then came to England to appear in the Cliff Richard film Summer Holiday. For a few years she was married to Jon Voight, who had taken over as Rolf on stage.

Does she still have no desire to see the film of The Sound of Music?

“No. Once you’ve been in an original rainbow there’s no need or craving to be in another one. You were there and that’s more than sufficient.”

Listen back The Sound of Music on Broadway on BBC Witness History.