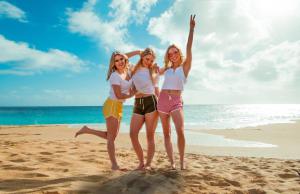 The Country4Country campaign’s focus is to raise awareness and funds for veteran organizations,
including Honor Flight, Folds of Honor and Wounded Warrior Project; the effort will continue with a summer-long 32 MILLION on-can promotion across various national markets, and more information on the concert can be found at https://pepsimidamerica.com/country-4-country-kickoff-concert/.

Southern Halo joins the concert roster with their latest hit single, “Sunshine,” lighting up the summer airwaves with a punchy, up-beat attitude and the group’s signature sibling vocal harmonies. The companion music video is sizzling, racking up plays at numerous heavy-hitting entertainment outlets with a current reach of 35+ MILLION household viewers. The “Sunshine” video can now be seen on: Heartland TV, Sidewalks Entertainment, DECTV.TV, IndiMusicTV and additional outlets.

The group’s recent performance of the song on WSMV-TV’s Today in Nashville showcased the trio’s high-energy style, and with the Memorial Day social media-only release of “Every Soldier,” the sisters shared their respect for those who serve. The group just debuted “in-the-round” at the world-famous Bluebird Café in Nashville and continues an ongoing radio promotion tour in support of “Sunshine.”

ABOUT SOUTHERN HALO
Natalia (principal songwriter, guitarist, lead vocalist), Christina (drums) and Hannah (bass) Morris are SOUTHERN HALO. Since their hypnotically upbeat Country radio debut, “Little White Dress,” caught the attention of U.S. radio and press, this sibling trio has broken down doors and shattered glass ceilings. Follow up singles, including “Rewind” and “Living Like That,” from the group’s CD, SOUTHERN HALO (2015), further bolstered the group’s profile. The band has opened for Maren Morris, Phil Vassar, Deana Carter, Love and Theft, Brantley Gilbert, Eric Paslay, Tyler Farr, Parmalee, Old Dominion, American Young, Blues immortal B.B. King and legendary chanteuse Dionne Warwick, and many others. The Cleveland, Mississippi natives have performed at a pre-show on the rooftop terrace of the Grammy Museum in Los Angeles, kicked off the Backstage Pass Series at the Grammy Museum Mississippi, launched Townsquare Media’s Say It With Pepsi Concert Series, and toured on the Spring/Fall 2018 High School Nation Tour. They entertained fans at CMA Music Fest 2018 and 2016, and have twice toured the U.K. The group has garnered two Top 25 MusicRow CountryBreakOut™ chart and Top 45 Billboard Indicator chart hits since the 2018 release of JUST LIKE IN THE MOVIES. Their newest single, “Sunshine,” was released in April. The Morris sisters enjoy partnerships with 1800Flowers, Spark*l and Go-Go Tuners. When they’re not on the road, they call Nashville home.