It has been a very busy period for the legendary and influential Los Angeles-based rock/pop duo Sparks, which consists of co-founders and brothers Russell and Ron Mael. Following the release of their 2017 album Hippopotamus, the two have performed shows; worked on the upcoming Adam Driver-led movie Annette as both its screenwriters and composers; and participated in a new Edgar Wright-directed documentary about their five decades’ long career. And even amid the current pandemic, the members of Sparks are still finding ways to be productive despite interruptions in their normal work schedules as a result.

“Russell and I usually tend to work every day at his place,” says Ron Mael, the group’s keyboardist and co-songwriter, in a phone conversation during quarantine. “He’s got a studio there. And so we’ve been during this period working on our own. I’ve been trying to write here [at my place]. He’s been doing different things, especially video things. So we’re trying to work independent of each other. I’m not sure how much longer that can go on until we finally have to break the embargo and just actually dive in.”

As the Maels were busy working on their upcoming film, they managed to record their latest studio album, A Steady Drip, Drip, Drip, which was released just weeks ago. Another Sparks winner, the new record encompasses the diverse and idiosyncratic range of musical styles that the duo have forged in their 50-year-existence—rock, chamber pop, dance music, synth pop and New Wave—with the band’s eccentric lyrics and Russell’s charismatic singing serving as the constants.

“We had been working so long on the Annette film,” Mael says, “and there was a time when there was kind of a lull while they were sorting out just different business sides of the film. Rather than just sit around and wait, we kind of were anxious to get back and record individual discrete songs. It’s always a lot of hard work. But as far as trying to squeeze something out, for whatever reasons, the material just seemed to kind of come fairly easily this time around.

While there was no particular theme going into the writing for A Steady Drip, Drip, Drip, several of the songs lyrically sound quite prescient during the current coronavirus crisis, such as “Please Don’t F**k Up My World,” “I’m Toast” and “The Existential Threat.” “It’s really bizarre, because those three songs in particular sadly take on a different and more relevant meaning than what was originally intended,” Mael says. “It’s strange how that works. They sound like they could have been written two months ago, but they were written quite a bit longer ago than that.”

With such lines as “So much now needs addressing” and “So much now is depressing,” the single “Please Don’t F**k Up My World” was released ahead of the record several months earlier and features a youth choir for added emotional effect. “We wanted to do an anthem kind of song, but not in a saccharine kind of way. The song is actually divided in half, so the second half is more of a statement of just ecological matters. I think having the title being “Please Don’t F**k Up My World” helps to keep it away from something too goopy. And then the first half of the song is more of an interpersonal statement where somebody is telling another person to ‘please don’t f**k up my world.’”

Carrying the duo’s trademark wit and absurdist point of view, the lyrics on A Steady Drip, Drip, Drip mirror the state of today’s society and culture: the poppy “Lawnmower” turns a rather ordinary contraption into something whimsical; “iPhone,” a commentary on people’s distraction with technological devices; and “Pacific Standard Time,” a love of letter of sorts to the brothers’ home base of Los Angeles. “Usually songs that are touting Los Angeles, or even just the West Coast in general, they’re always kind of upbeat and bright,” Mael says of the latter track. “We’re obviously really familiar with the mood of this area, and there’s another side to it that is kind of more melancholy and reflective. And so I just thought that it would be a real challenge to try to write a hymn to this area, but something that wasn’t all boppy and sunny.”

At the moment, Sparks are scheduled to play this October in the U.K., a territory where their music has generally been more receptive and popular than in the States. “Obviously the situation is so unknowable now, that those might have to be delayed until spring [2021],” Mael says, “but we’re not certain right now what’s happening. We’ll see what happens.”

The sense of uncertainty comes amid the Maels’ work on the Annette film, directed by Leos Carax.  The movie was to have premiered at Cannes this month until the festival was canceled due to the crisis. Still, “we are lucky that everything was shot and towards the end of last year,” says Mael. “The whole experience—the production of the film—was so amazing for us because we’ve spent eight years on it. We’re huge film buffs and to actually see a film that you’ve written being performed by actors and sung by actors like Adam Driver and Marion Cotillard—it’s really surreal.” 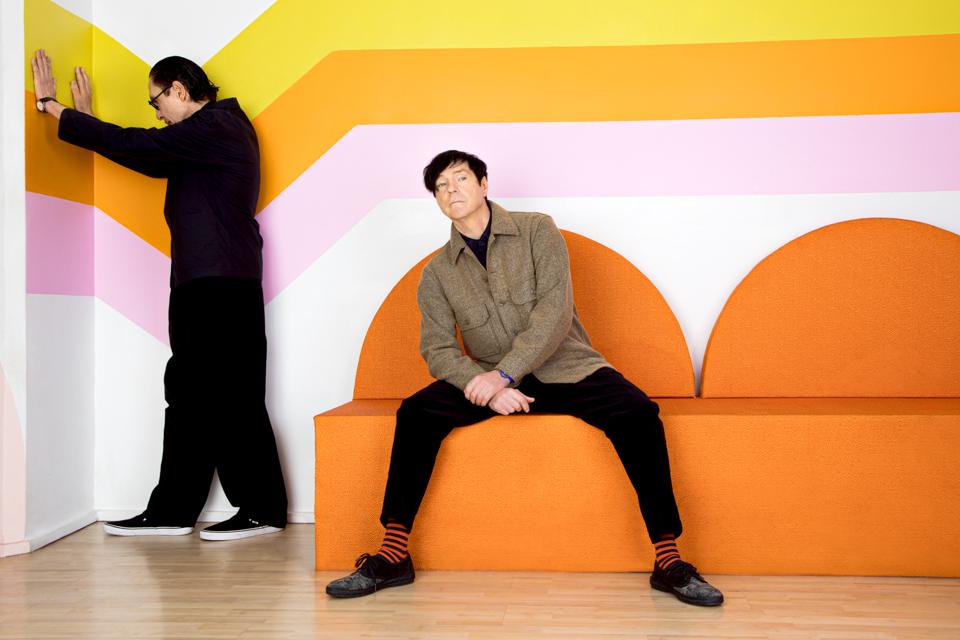 Given Sparks’ ability to create these ornate and cinematic-sounding songs, it seems natural that both music and film for the brothers were destined to intersect. “It didn’t feel like a huge stretch,” Mael says. “We always kind of are trying to paint a big picture or a narrative within a three- or four-minute song. And so to kind of carry that on for an hour-and-a-half or two hours, it isn’t like a totally different proposition. Stylistically, 95 percent of the dialogue in the film is sung. It did seem like a natural step for us to take.”

Both the new album and the upcoming movie coincide with the 50th anniversary of Sparks’ formation this year—a career driven by the duo’s own musical intuition without the influence of the marketplace or trends. Like other great bands before them, from the Velvet Underground to Big Star, Sparks never sold a lot of records or had Top 40 hits (the closest would be their 1983 single “Cool Places,” a collaboration with the Go-Go’s Jane Wiedlin). However, they attained a growing cult-like following and influenced and earned the admiration of such acts as Pet Shop Boys, Erasure, Franz Ferdinand and Morrissey.

“I don’t know whether it’s an inability to be able to do it another way, or whether it’s more intentional,” Mael says. “But at this point, we know that we want to keep things as purest as we can, just because we’re doing the kind of music that we want to hear. This is the kind of music that we really want to be making. There’s just the drive that wants to keep pushing this and feels that what we’re doing is something that each needs to be there and that nobody else is doing, and then also that we’re capable of doing at this point.”

One of the many musical highlights in Sparks’ career certainly has to be their 1979 album No. 1 in Heaven, produced by Giorgio Moroder, which marked a dramatic shift to disco and electronic music from the glam rock sound of their previous first several albums. That groundbreaking record served as a precursor of the synthpop explosion in America during the early 1980s.

“The albums that we were doing when we were living in the U.K.— towards the end, we were feeling that we had been taking a band format as far as we could go,” Mael recalls of that period. “We heard “I Feel Love” on the radio, the Donna Summer [hit] that Giorgio Moroder had produced. We thought It could be interesting if it’s Russell singing on that kind of cold electronic background. At the time [Giorgio] was trying to figure out a way to work with a band, and we were kind of an ideal situation for him because we didn’t have other permanent musicians with us— the core of the band was just keyboards and writing and singing. That worked out perfectly where it could be kind of a real collaboration between the three of us. We had never worked with electronics before and it was just a revelation. Everything we know was based on what we learned from Giorgio during that experience.”

While the group’s music has evolved over the years—with such notable albums as Kimono My House the aforementioned No. 1 in Heaven, In Outer Space and Gratuitous Sax & Senseless Violins—it still has the distinct Sparks DNA of Russell Mael’s dramatic singing, catchy pop melodies, and humorous and pointed lyrics. On their longevity as musical collaborators for five decades now, Ron Mael credits himself and Russell for having a basic idea of what pop music should be.

“When we were at university, we were kind of in two separate bands, and then we realized that maybe we should link up forces. And so we’ve never kind of differed in a basic musical sense about things. Also just within Sparks, our two roles are so different from each other. I have no desire to be the front man or to be the singer, and Russell did write more of the songs earlier, but less so nowadays.

“We’ve also kind of probably grown closer just because of having the studio and it being really pretty self-contained where it really is just the two of us most of the time. We do have our discussions about individual things from time to time [such as] sounds or whether this is the right kind of a lyrical thing for a particular song. But in a general way, we kind of see things the same way at the point — almost telepathically — we can communicate things while we’re recording. There isn’t a lot of discussion going on.”