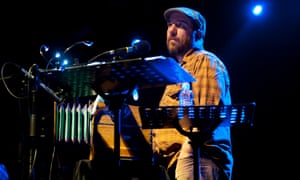 Stephin Merritt has just spent six weeks confined to his Manhattan apartment after contracting coronavirus. He was ill for 10 days, then recovered. He’s usually a crazily prolific songwriter – two of his band’s most celebrated albums, 50 Song Memoir and 69 Love Songs, obviously contain 119 songs between them – but he hasn’t come up with any new numbers for Magnetic Fields since he got ill. The problem is that he can only write songs in bars. And not just any bar – it needs to be “one-third full of cranky old gay men gossiping over thumping disco music”. Plus he needs a glass of cognac, to be slowly sipped, and a corner with a light so he can see his notebook.

Fortunately, before the outbreak, he was able to find a place that fulfilled these conditions and the result is the Magnetic Fields’ latest album. Like most of Merritt’s records, there’s a concept – on this one, titled Quickies, all the songs but one are two minutes 15 seconds or less. However, that’s not an unusual length for a Magnetic Fields tune – as Merritt points out over the phone, one-third of the songs on 69 Love Songs would qualify.

Is it ingrained in him that this is the perfect length for a pop song? “It’s ingrained in everyone in Gen X or earlier,” he says. “It used to be that seven-inch singles were 2 mins 50 in length maximum – this is before Bohemian Rhapsody and such epics were considered singles.” It’s much more rare for him to write a song that lasts around five minutes. “That’s long to me, yes, both in my tastes and musical output. I like bubblegum and experimental music so I’m comfortable with two minutes and I’m comfortable with six hours.”

This is a relatively loquacious answer for Merritt, whose laconic baritone has had many interviewers tearing their hair out. When I mention his long-standing interest in brevity – he co-wrote a book, 101 Two-Letter Words, with the New Yorker cartoonist Roz Chast, inspired by the shortest words you can use in Scrabble – his entire answer is: “Hm.”

He’s hilarious, if you don’t mind protracted awkward silences – a man of passionately held, if quietly expressed, views. Don’t get him started on bonus tracks. “I’ve always hated bonus tracks. The whole idea bugs me. Either it’s an album or it’s not an album. It gets my Asperger’s up to even think about it.” Does he really have Asperger’s? “I don’t know, I refuse to ask for a diagnosis, but my various friends with Asperger’s swear I do, yes.”

As well as brevity, it’s Merritt’s way with a lyric that makes the songs on Quickies extraordinary. It’s hard to imagine anyone else writing tracks called You’ve Got a Friend in Beelzebub, I Wish I Were a Prostitute Again and The Biggest Tits in History. Merritt says that I Wish I Were a Prostitute Again is something a couple of his friends have regularly lamented. “They both harp on it a lot. I have heard a whole lot of the lyrics to this song verbatim. But clearly it’s an exaggeration of what they actually do.” (The song includes dressing up as King Tut, Betty Boop and the Turin Shroud and selling one’s “urine” and “poop”.)

Then there’s the song The Day the Politicians Died, which describes global revelry breaking out in response to the event of the title. A bit extreme? “It’s a little less extreme than what I think about politicians,” Merritt counters. “It would be illegal for me to express my actual political opinions in probably any country in the world, and I definitely wouldn’t be allowed to travel.”

He pauses – again – and then elaborates. “In reaction to Donald Trump’s suggestion that people ingest disinfectants, Howard Stern suggested that there should be a Trump rally in which his supporters drink disinfectants and, quote, all drop dead, unquote. I admire Howard Stern for being able to say these things and keep his job. I also completely endorse that sentiment.”

Magnetic Fields fans know more about Merritt than we usually would about a musician. His previous album, 50 Song Memoir, had a lyric about each year in his life (he’s now 55) and detailed everything from his eccentric mother – who gave away all her money and joined new-age cults, dragging her son with her around the US – to the many odd illnesses he has been plagued with. The most debilitating is hyperacusis, an acute sensitivity to certain sounds, which would make it impossible for Merritt to play with an amplified rock band – Magnetic Fields gigs are much quieter affairs.

Merritt believes he all but destroyed his hearing watching the industrial band Einstürzende Neubauten play a gig in New York in the early 80s. When I interviewed him 16 years ago for the cult gay magazine Butt, a publication for which he also posed naked, he told me: “I was standing too close to the circular saw being scraped across corrugated metal, and listening to the incredible sounds in my own ear of what I now realise was my hearing being damaged.”

Though Quickies is mainly fiction – one song is called I Wish I Had Fangs and a Tail – Merritt’s life has still informed it. I note that there are two songs about the sinful allure of dancing (Evil Rhythm and The Price You Pay) and suggest that dancing is a theme on the record. “And all other popular music, yes,” comes the reply.

Merritt takes pity on me and elaborates. “When I was young I lived against my will on a Tibetan Buddhist commune in Vermont, where music was forbidden. Music distracts you from enlightenment or something. But I was – also against my will – made to grow up in Boston for a while, which had a long history of Puritanism where all sorts of things have been banned, one of those being music, another being theatre, and I am heir to all sorts of Puritanical impulses. Also, my mother was a radical feminist acolyte of Mary Daly who I have relentlessly satirised in a number of songs, including Kill a Man a Week” – another song on Quickies. “That’s really not an exaggeration of Mary Daly’s actual opinion, it’s only a reductio ad absurdum but not actually an exaggeration.” 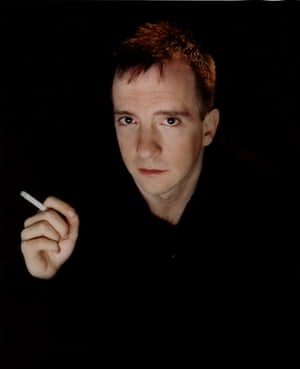 Merritt around the time of 69 Love Songs. Photograph: Circus Records

The Magnetic Fields’ first single came out in 1991; by the late 90s Merritt’s songwriting was already revered in the music press, before 69 Love Songs, released in the US in 1999, showcased the range of Merritt’s talents to a wider public. Ranging from songs about horny puppies to sharp attempts to fathom the nature of love itself, it’s still a monumental record that is destined to overshadow the rest of Merritt’s work – which he doesn’t mind, since that was the intention. Like all his records, it ranged stylistically from folk to jangly post-punk, to Fleetwood Mac-inspired AOR and even Ace of Base-style Swedish reggae, though some genres – particularly rock – are always off-limits.

Quickies, of course, is being released in the teeth of the pandemic, and Merritt is brutal about the implications for his career. “We’ve already postponed our US tour from June to January and I don’t know if January’s realistic at this point. So it may have simply ended my concert career, we don’t know.”

What would happen if you couldn’t play live? “Well, I would probably have to get a job. But I would actually be relieved that I didn’t have to perform any more because I’ve never been a big fan of performing.” Like most musicians, Merritt won’t be able to get by on streams and record sales alone: “The money in the music industry is mainly in concerts at this point.”

It all spells trouble for gigging musicians. “Medium-size mass gatherings will be the last thing to come back,” he predicts. “I see no reason why there can’t be big outdoor festivals, but we really really don’t do big outdoor festivals – we have a cello. Although I guess we could just have the cellist switch to bass guitar.”

And then you could rock out, I joke – since if the choice was between making rock music and surviving, or staying pop and perishing, Merritt would choose the latter every time.

“I don’t begin to know where to go with that,” he replies.

• Quickies is out now. The vinyl version, on five seven-inch EPs, is out on 29 May, as is the CD.