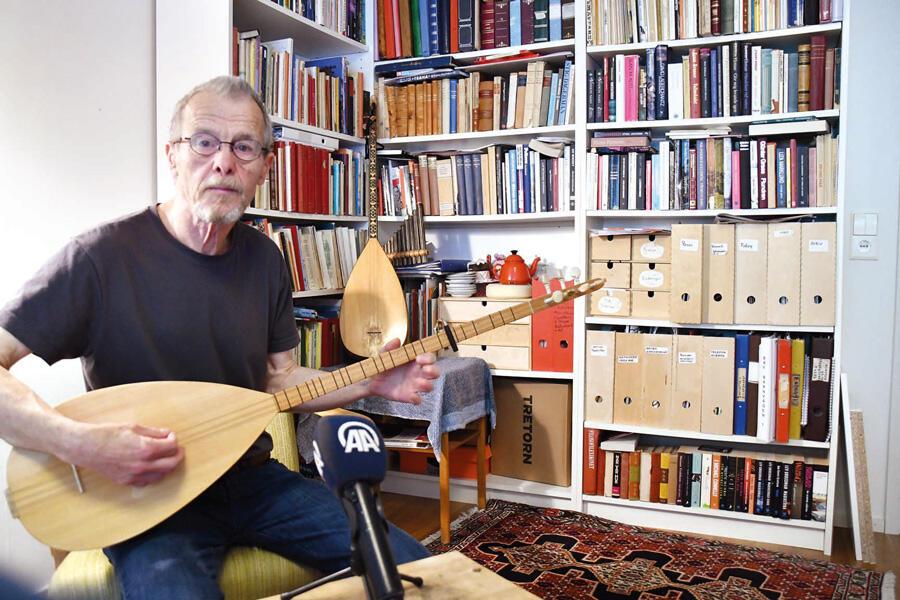 Proving that music is a universal language, the baglama, a stringed instrument closely linked to Anatolian Turkey, has found one of its fiercest fans in the far-flung Nordic north, in Sweden.

Bengtis Hansson, a huge follower of legendary Turkish minstrel Aşık Veysel, has been playing the bağlama, also known as saz, for some 35 years, inspired by a chance incident when he first heard its distinctive sound coming from a radio.

“I told myself that it was a special sound for me,” Hansson, 69, said.

Up till that point, he had been a blues aficionado, channeling African-American’s music of sadness and hard times through his guitar.

But hearing the bağlama steered him in a different direction, and his need to learn the exotic instrument, a conviction cemented when he saw someone playing it in a festival in Stockholm, Sweden’s coastal capital.

Later, Hansson had a chance to come up to the musician and ask him if it was easy to learn to play it.

“He looked me in the face, moved his head, and said, ‘Maybe,’” Hansson recalled.

The most common Turkish folk instrument, the bağlama has seven strings, a wide, round back, and a long neck.

Probably introduced locally with the Turkish settlement of Anatolia in the 11th century, it can be played by hand or with a kind of pick.

Hansson was lucky enough to find a course in playing the bağlama in Stockholm, where he learned at the feet of a man named Cengiz Tümer, probably an expatriate Turk.

Hansson said Tümer was quite surprised that a Swedish person was trying to learn the bağlama.

Playing the instrument acts like a kind of spiritual balm, said Hansson.

“While playing the bağlama, I listen to my soul and find a deep peace,” he said.
Hansson said he performs and sings at many festivals and has even composed 10 of his own songs, in a Turkish folk music style called bozlak, typically exploring themes of love and loss.

He praised Aşık Veysel, an iconic Turkish poet and musician who was blind most of his life, and died in 1973 after a long and distinguished career.

Calling Veysel a very special minstrel, Hansson said he has translated some of his works into Swedish.

Hansson said Veysel lived and played in a different time, one in which the high-tech recording studios of today were unknown, and musical artistry was more down to earth

“He was playing the bağlama naturally, and as long as I listen to him, I recognize his amazing quality,” Hansson added.

Hansson also sang the praises of Neset Ertas, a folk singer from a later generation who died in 2012, calling him a gifted bard with a style somewhat different from Veysel’s.

He said Ertas played joyful pieces as well as sober, more downbeat ones.

In his continuing musical education, Hansson said he also listens to many other minstrels from Turkey such as Aşık Mahzuni Şerif, Arif Sağ, and Musa Eroğlu.