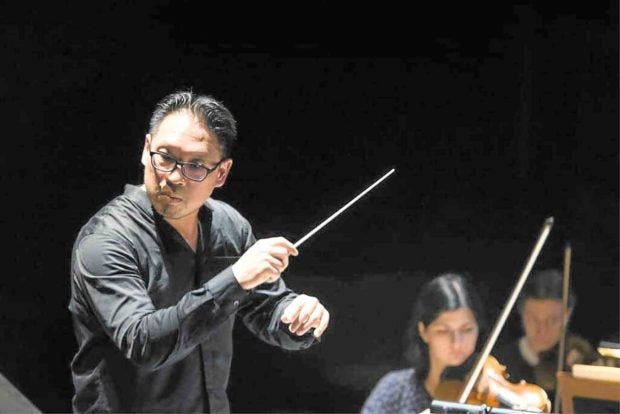 Jeffrey Solares, MSO executive director, made the announcement during the orchestra’s concert last Sept. 1 at the Power Mac Center Spotlight in Circuit Makati.

Chen may be familiar to concertgoers since he has been a guest conductor in the last three seasons of the MSO. Last June, he successfully led the MSO in the 5th Hunge River Bank Symphonic Festival in Shenyang, China. MSO was the only foreign orchestra invited to the festival.

Chen said his vision was to make the MSO a “world-class orchestra.” The musicians have the “heart” and a “resilient attitude,” which are rare musical gifts and necessary to achieve such a vision, he pointed out.
Great masters
Chen said he wants the orchestra to “go back to the basics“ and play the “fundamental” works of “great masters” such as Haydn, Mozart, and Beethoven. Doing so would provide invaluable training for the cultivation of style and keen sense of ensemble playing, he explained.

To attain his vision for MSO, Chen said he would have to get to know more of the orchestra’s musicians, so that together, they could create a musical protocol and culture.

Thus, Chen said he plans to stay longer in Manila even as he fulfills his international conductorial engagements.

The debonair conductor is known for his charisma and dynamic versatility—conducting opera, ballet, symphonic works and chamber orchestras to sold-out concert halls across four continents. For this year Chen will continue his positions as principal guest conductor of the Orquesta Sinfonica de la Universidad Autonoma del Estado de Hildalgo and resident conductor of the Aperio Ensemble in Houston, Texas.

Chen, a composer and arranger himself, has performed his own works and other works from contemporary composers. He has scored for TV dramas such as the German series “Babylon Berlin” and the Netflix show “Sense8.”

Chen is fluent in English, French, Italian, Spanish and Chinese. He resides in Houston, Texas.—CONTRIBUTED