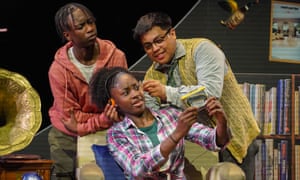 It’s massively heartening to see such talented, committed teenagers on stage as ZooNation’s youth company. A diverse crew aged between 12 and 17, the girls are powerful, the boys unafraid of expressing themselves; they make you feel good about the future.

In Tales of the Turntable, a shy wannabe DJ called Eric goes on a tour of music and dance history, courtesy of his grandpa’s magic gramophone time machine. They roll back the decades to take in swing, disco, hip-hop, house and new jack swing, with lively, quick-footed choreography from longtime ZooNation associate Carrie-Anne Ingrouille, whose credits include Six and Hamilton.

The neat conceit is a great way of packing in lots of dance styles, and finding links between them (Charleston footwork and hip-hop toprock, for example). But the narrative is uneven and sometimes loses its thrust. The script is delivered by a recorded narrator with the young performers miming: this works on one level but exposes the soundtrack that ties everything together, and DJ Walde’s music lacks enough big hooks to boost the party. You really notice the difference when a few famous songs light up the stage.

The young performers are terrific, but the best bit by far is right at the end, when the dancers take their applause in a ramped-up climax: the tempo accelerates, the music is bang up to date and the moves are sizzling. Solos ping-pong around the stage and the crazy energy of the group erupts in almost violent joy. You couldn’t keep up that level of attack for a whole show but it does make what’s come before seem rather staid.

Still loads to smile about, though. Recommended for teens and tweens.

• At the Southbank Centre, London, until 26 August.