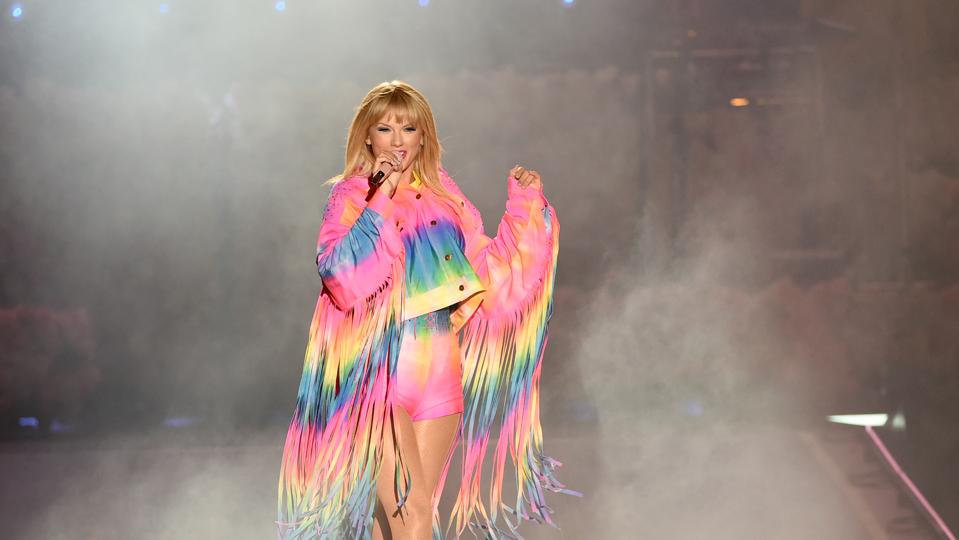 Ten years ago, Taylor Swift was best known as an up-and-coming country singer who’d just been interrupted by Kanye West at the MTV Video Music Awards. What a difference a decade makes: Fresh off her seventh studio album, Swift is the most-nominated act at this year’s VMAs—and the highest-paid woman in music.

Swift, who is also the world’s top-earning entertainer of any stripe, pulled in $185 million pretax over the past year. Much of it came from her Reputation Stadium Tour, which grossed a U.S.-record $266 million. She also cashed in on a new nine-figure deal with Universal’s Republic Records, and her new album Lover, released last week, is poised to add additional dollars to her coffers after a prime-time performance to kick off the 2019 VMAs.

“Taylor and her team understand the subtle yet important art of creating substantial moments,” says Kim Kaupe, a Forbes 30 Under 30 alum and cofounder of the Superfan Company, which has worked on album packages with Swift in the past. “These moments are not only perfectly captured by fans and media outlets, but they are the perfect bite-sized, PR-ready morsel that the news cycle loves.”

Swift more than doubled the annual tally of music’s second-highest-paid woman, Beyoncé, who clocked $81 million, mostly from her On The Run II stadium tour with husband Jay-Z and her Homecoming live album and Netflix special. Rihanna rounds out the top three with $62 million, the bulk of that coming from her Fenty Beauty joint venture with luxury goods giant LVMH.

Our list of the world’s highest-paid women in music measures pretax income from June 2018 to June 2019. Fees for agents, managers and lawyers are not deducted. The numbers are compiled with data from Nielsen Music and Pollstar, as well as interviews with handlers, industry experts and many of the stars themselves.

Other notable names on the list include newcomer Ariana Grande, who ranks sixth with $48 million, buoyed by two chart-topping albums—Sweetener and Thank U, Next—released within six months of each other. There are plenty of veterans in the ranks, such as Katy Perry, who raked in $57.5 million, much of it from a lucrative arena tour.

Perry and Swift recently ended a long-running feud, noting they’d like to inspire young women. The music industry could benefit from that sort of leadership: Although the ten highest-paid women earned $645.5 million this year, up 28.5% from $502.5 million in 2018, there remains a glaring gender pay gap in the business, particularly in the lower ranks.

As for Swift, her financial fortunes have improved steadily since the VMAs in 2009—a year in which she earned $18 million—in tandem with those of her interrupter. West, who pulled in $25 million that year, has averaged $35.2 million annually since, including a career-best haul of $150 million over the past 12 months that landed him on the Forbes cover. Not bad, but not as much as Swift: Over the past decade, she’s averaged a cool $82 million.