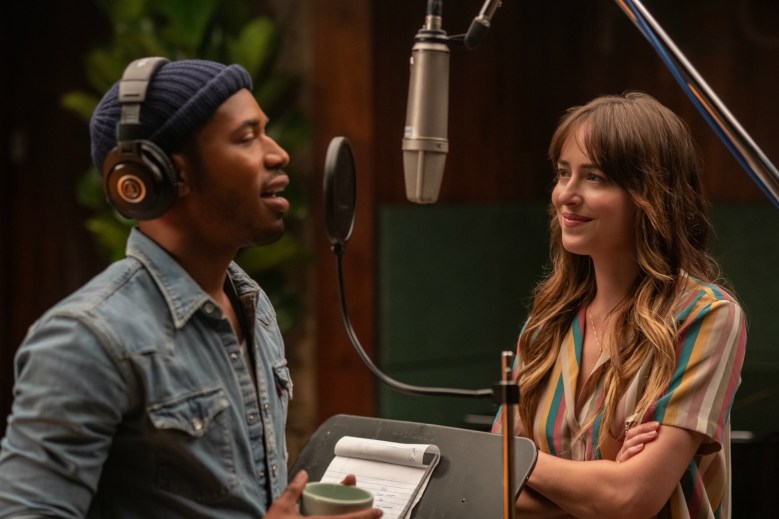 The stars of Nisha Ganatra’s shaky dramedy are delightful together, but the film they inhabit is never happy to let that bond be its central focus.

Grace is a superstar singer trying to figure out the next act in her career. Maggie is her ambitious personal assistant who harbors her own big musical dreams. A less mean-spirited (and, unfortunately, far less funny) take on “Devil Wears Prada,” Nisha Ganatra’s “The High Note” instead imagines what it might look like if a pair of talented women joined forces, with a few bizarre caveats thrown in along the way to amp up the drama. While “The High Note,” originally known as “Covers” when Flora Greeson’s script appeared on the Black List in 2018, is ostensibly built on the relationship between its central women (a good, different idea), a series of silly contrivances, unwelcome twists, and off-kilter pacing ensure it too often forgets what could have made it special.

At least stars Dakota Johnson and Tracee Ellis Ross are occasionally allowed to make some magic, an inspired pairing that finds the actresses doing their best work together (when their characters are separated, that’s a different story). The strength of the pair’s chemistry — with Johnson cast as the smart but starry-eyed Maggie and Ross doing a lighter spin on her own real-life mother’s mythos as the larger-than-life Grace — helps guide shaky character development, though “The High Note” is less successful at making its stars shine when they interact with others.

Without Maggie and Grace’s lived-in and believable bond to drive it, it often feels as if the performers asked what their motivation was and someone yelled, “uh, oh… music!” and no one bothered to take it further, leaving great gaps in each characters’ baseline personality and other desires. When it’s just Maggie and Grace and their shared love for music, it works. Apart, everything grinds to a halt, both logically and emotionally. At nearly two hours, “The High Note” finds plenty of room to cleave its leading ladies, weighing down both the film and its most compelling bond.

At its heart, “The High Note” is about two women trying to make it in a world that’s uninterested in their goals. Grace still turns out a good show (and for fans of Ross’ stage presence and wicked fashion sense, the film offers that in spades), but she’s aware that it’s “the same show every night.” What comes next? That’s the big question, whether that means settling into a cushy Vegas residency or doing something different (like, oh, a live album of greatest hits produced by Maggie). Maggie — a musician and composer by training, an assistant by financial necessity, despite living in one of those only-in-the-movies apartments — has secretly been crafting her idea of what Grace’s live album should sound like.

That alone should provide enough drama, but Greeson’s script piles on a series of schemes that do little but draw out the inevitable moments involving Maggie and Grace. Maggie, already stretched beyond her limits, suddenly takes on new client David (Kelvin Harrison Jr.) who has his own fears about working in the industry (perhaps he should be more afraid that his new producer is constantly lying to him). Inevitably, the tensions between Grace and Maggie will need to be resolved, but the film limps to a tied-up conclusion with all sorts of boring razzle-dazzle that only distracts from the film’s very compelling central relationship.

Even more choppy is the film’s editing, enough to hint at the probability that some of the film’s cheapest dramas were manufactured in the edit bay. Overly snipped scenes that flip back and forth between shots and characters rob the film of significant intimacy — one-on-one chats that should feel easy are suddenly, oddly frantic affairs — while overlong takes of the recording process make it feel numbly self-important (did you know this movie was about music? did you?).

Less urgent is the sense that Maggie’s two lives are about to crash into each other, and while a few fun montages illustrate her increasingly messy life, there’s a slack energy as she tries to juggle her different lies and obligations. Perhaps that’s why a bizarre second-act twist (and an even more bizarre third act twist) are utilized, all the better to push forward a story that doesn’t need such contrivances to be emotional and worth the watch. (It is impossible to fully unpack just how strange the choices made in the film’s final act are without spoiling them, but they will likely send many viewers straight to the rewind button in an attempt to figure out how the hell we got here.)

While Maggie and David’s burgeoning relationship is charming enough — again, casting is hardly the issue here, and Johnson and Harrison are nearly as enjoyable to watch interact as Johnson and Ross — the main attraction is the fraying bond between Maggie and Grace. Sequences in which Johnson and Ross are allowed to actually dig into what’s going on between them are the best the film has to offer. Maggie getting a love interest seems like a shoehorned-in choice to make the movie more palatable to a wide audience, but “The High Note” is ultimately about her and Grace, and to diminish that aspect is to demean it.

Ironically enough, the film’s insights into the music industry — particularly, how it treats its women — are cleverly laced throughout and eventually help contextualize many of Grace’s biggest fears. The film’s glossy feel, complete with a dizzying amount of “driving through glam LA!” shots and languid tours of Grace’s mansion, highlight the divide between what is presented to the masses and what it actually feels like to be a caught in the industry’s eye. If only “The High Note” was more adept at mining that weirdness in service to its actual plot, it might have been worth singing about.

Focus Features will release “The High Note” on premium VOD on Friday, May 29.