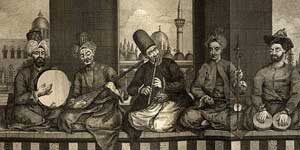 BENNINGTON, Vt. – “Jews and Sufis: Shared Music Traditions” will be the theme of a free concert of the Carriage Barn Concert Series on Sunday, Sept. 15, from 3 -4:30 p.m. Deane Carriage Barn, 1 College Dr., Bennington.

From the 16th century, Hebrew devotional poetry (piyyutim) set to Ottoman/Turkish makam music for use in the synagogue has shown the  relationship Jews established with members of Sufi Muslim mystical communities in Ottoman regions.

Performers will include the DÜNYA Ensemble of Boston as well as a mixed chorus of singers from the Bennington College and Williams College communities and the choir of Israel Congregation of Manchester.

Dr. Edwin Seroussi, professor of musicology at Hebrew University of Jerusalem, will give framing remarks. Seroussi is the Emanuel Alexandre Professor of Musicology and the director of the Jewish Music Research Center at the Hebrew University of Jerusalem. He researches North African and Eastern Mediterranean Jewish music, Judeo-Islamic relations in music, and Israeli popular music. A pioneer in the study of Mediterranean and Middle Eastern musical cultures and traditions, Seroussi was awarded the 2018 Israel Prize in the music category. He has also won the Joel Engel Prize for Life Achievement in Jewish Music Research, Tel Aviv Municipality. Information may be obtained by calling 802-440-4510 .