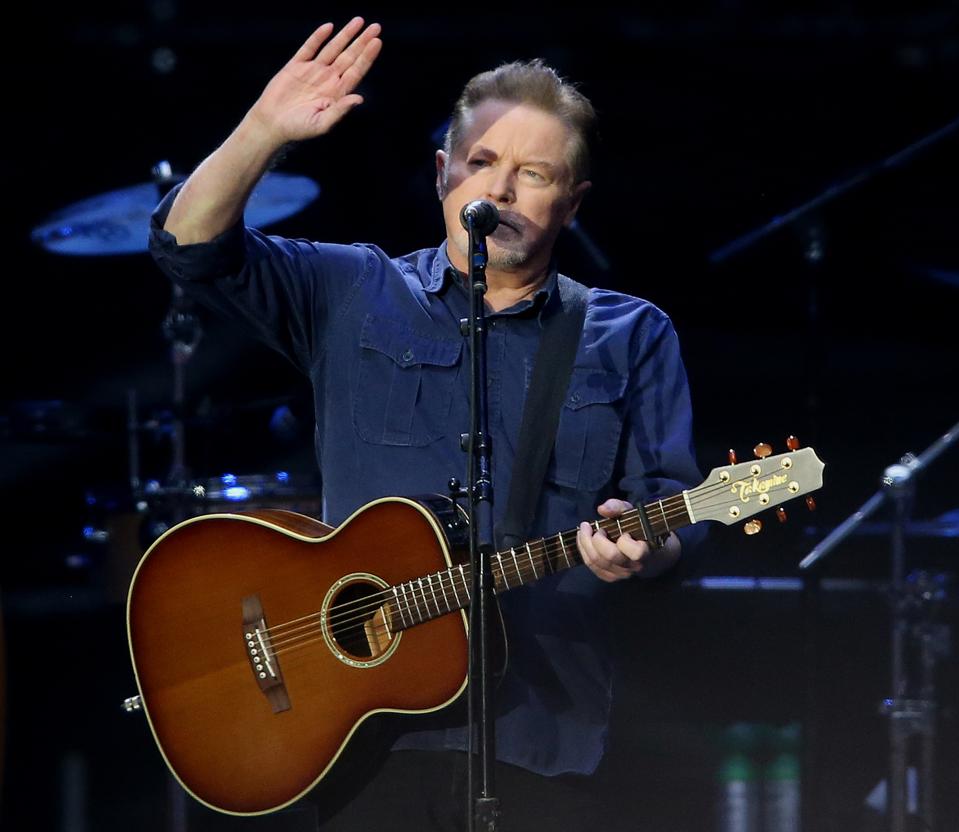 Don Henley of the Eagles performs at Wembley Stadium on June 23, 2019 in London, England. (Photo by Harry Herd/Redferns)

Recording artists and independent labels will check out of the Hotel California if Gov. Gavin Newsom signs the controversial “gig economy” bill, warn music industry groups who say they hit a wall in negotiations with the musicians’ union.

“Get ready Nashville and New York — it looks like you’re about to have your own recorded-music boom,” reads a joint statement from the Recording Industry Association of America, A2IM and the  Music Artists Coalition.

The expansive and explosive bill, California AB-5, would convert independent contractors into regular employees, impacting a diverse pool of freelancers from Uber drivers to scuba divers. Among the loudest opponents are newspapers, movie makers, adult entertainment companies, and truck drivers, some circling the Capitol in big rigs with horns honking.

Music industry horns are blaring too, as the bill’s wide net has caught labels and music professionals, from session musicians and vocalists to producers, engineers, songwriters, tour managers and roadies, among others.

Hardest hit, say the music trade groups, are independent artists and labels who record or otherwise collaborate with musicians and vocalists, and may now need to provide employment benefits such as minimum wage and overtime, workers’ compensation coverage, unemployment insurance, among other protections.

Customary arrangements with freelancing music professionals have been flexible, including flat fee deals and “spec” agreements, where no one gets paid unless the project prospers. These arrangements may fly out the window or go underground in California.

Curiously, many kinds of workers were granted exemptions from the new law, including insurance brokers, doctors, dentists, lawyers, architects, engineers, private investigators, accountants, investment agents, salespeople, commercial fishermen, and real estate agents, among others. Freelance photographers and journalists, also got exemptions, as long as they don’t contribute more than 35 pieces per year to a company.

Even barbers, manicurists and electrologists made the cut with their own exemptions. But no such luck for music professionals.

Music biz negotiators reportedly ran into a wall with the American Federation of Musicians, representing session musicians, according to Jordan Bromley, a board member of MAC and a music business attorney based in Los Angeles. Prominent music manager and executive Irving Azoff is also a member of MAC’s board.

“After much work, a compromise exemption that protects independent artists, songwriters and labels along with the existing collective bargaining agreements was approved by multiple interested parties. And, without discussion, rejected by the AFM,” Bromley said.

The AFM did not respond to requests for comment.

“We were hopeful they would reach an agreement,” said Assemblywoman Lorena Gonzalez, the author of the bill, in an email. “But once language was drafted to chart a path forward after the Dynamex decision [discussed below], the recording industry preferred no legislation at all. Although we have reached the end of the current legislative year, I’m committed to find consensus in this industry in the year ahead.”

Bromley denied that the Music Business groups preferred no legislation, adding “the majority of the music industry – recording artists, independent, and major record labels – came together to work with the labor unions and draft an exemption to AB 5 to prevent this unintended negative impact on California music. Unfortunately, the AFM refused to engage in the process, or meaningfully consider the concerns of individual independent artists and independent labels, including some of their own members.”

Last week, the RIAA released a rousing mid-year report showing U.S. music sales soaring 18 percent for the first half of 2019 to $5.4 billion, without including new albums from Taylor Swift and Adele.

Over the past decade, Los Angeles has overtaken New York as the music-making Mecca of the nation if not the world, but a mass pilgrimage from the hallowed studios of Hollywood to the foam-paneled rooms of Williamsburg and Berry Hill may be coming because of the complications of compliance with the “gig” law by every artist and label in the state, big and small.

California estimates the new measure will raise $7 billion annually in new payroll tax revenue by ending what it calls “willful misclassification” of employees as independent contractors.

The gig bill passed the state’s legislature along party lines with liberal governor Newsom expressing eagerness to ink it into law quickly.

California’s largely left-leaning music business would tend to support a measure to lift the lot of the types of laborers involved in the litigation that eventually led to the legislation, such as Uber drivers and cucumber pickers. But when it comes to overdub singers and telecaster pickers, it’s another story altogether.

“It’s a terrible fit,” said Bill Berrol, an attorney representing top producers, mixers and recording artists. “Either its going to drive the music economy underground so that people are going to bend the rules even more than they already do, or its going to encourage record producers not to hire musicians and either to play the stuff themselves or use [computerization] to generate music, because you don’t need to pay a machine workers’ comp, health insurance, and all the rest.”

Likewise, touring musicians in California might be less inclined to hire other musicians to play with them. “They’ll just perform to pre-recorded tracks, even more than they are already doing,” Berrol said.

Unaffected would be current AFM payment scales for session players, that can run from about $80 to $350 per hour, including minimum fees and health and pension benefits. But the new law could expose artists or small labels to substantial liability for failing to provide full employment benefits. “A disgruntled musician might gain an unfair advantage over an artist, where they might use an employment claim under this new law as leverage to get a better deal after the recording session is over,” Bromley said. In a business known for creative and frequent litigation, he’s on the mark.

MAC’s eleventh hour attempt to affect legislation they say could hurt music creatives echoes a fight by an earlier group called the Recording Artists Coalition (RAC), which in 2000 rallied headliners like Don Henley, Eddie Vedder and Sheryl Crow to repeal a copyright law revision that the RIAA quietly snuck into an unrelated bill (the “Satellite Home Viewer Act”). The RIAA move would have designated musical recordings as “works for hire”, depriving recording artists of reversions of their music copyrights later down the road. Once artists and their representatives woke up to what had passed Congress under their noses, a public relations bomb exploded and the RAC, with the support of superstar artists, got a repeal signed by President Clinton almost overnight.

All is apparently forgiven today, as the RIAA joins forces with MAC to deal with the troubling new California law. What a difference two decades makes. Perhaps the only constant is Don Henley, a powerful lead vocalist in support of both RAC in 2000 and MAC today.

The music biz coalition is expected to put forward a new bill that fits their industry better than AB-5, to keep the Hotel California from becoming Heartbreak Hotel for music professionals.