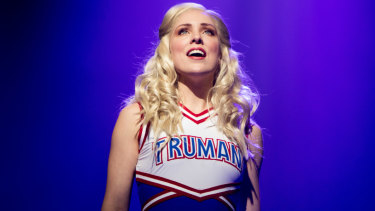 Campbell, played by Burgess, is the captain of the Truman High School squad before she is forced to move to a neighbouring school after being unexpectedly redistricted. After a rocky start, she convinces the dance crew there to enter the national cheerleading competition and ends up facing off against her old team.

“The musical itself is about acceptance and diversity,” Burgess says. “It really is about not judging a book by its cover.”

Burgess plays Campbell in Bring It On, which is loosely based on the hit 2000 movie of the same name. Credit:Nico Keenan

Despite its modest teen movie roots, the artistic pedigree behind this 2011 stage version is impressive.

Bring It On: The Musical boasts a book from Avenue Q’s Jeff Whitty, music from Pulitzer-winning composer Tom Kitt, lyrics from Amanda Green, and music and lyrics from Lin-Manuel Miranda, who worked on it between his hits In the Heights and Hamilton.

The Australian premiere of Bring It On: The Musical had a sold-out run last year in Melbourne and along the way picked up the top prize for excellence in choreography at the 2019 Green Room Awards. The show now returns with a fresh cast on a national tour, including the show’s premiere in Sydney.

For triple-threat Burgess, who has appeared as Frances “Baby” Houseman in the Dirty Dancing musical and more recently as the Ringmaster in Barnum, it has proven her most difficult role to date.

“I have to belt the highest notes I’ve ever had to sing onstage whilst being lifted in the air,” she says. “It’s very challenging. Sometimes when you have a challenge you tend to complain about it because it hurts, but with this one I’m like bring on the pain. I love it.”

With only a relatively short rehearsal period to learn to convincingly portray cheerleaders, Burgess found the cast had to bond quickly. “We’re all lifting each other, we’re all being lifted, so it takes trust,” she says.

“You get these cheerleaders who work with their partners for years and we had two weeks to get to know each other. We all just dived in headfirst and said let’s do this. I think what’s come of that is a really solid display of athleticism. I get a lot of people asking me how long I have been a cheerleader because they’re thinking I am a professional.”

To give audiences an authentic display of the sport’s spectacular moves, the musical theatre cast are also joined by real cheerleaders for the fantastic flips. “The four cheerleaders who have helped us with our stunts, they are doing some mind-blowing tricks,” Burgess says. “The two base men are throwing these girls in the air and catching them on one foot in one hand straight in the air. I see it every night and still get blown away.”

Bring It On: The Musical is at State Theatre from August 27 to September 8.