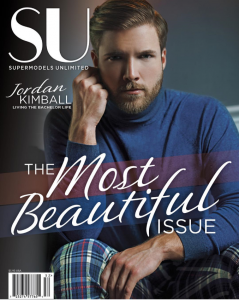 We are so thankful that these models, celebrities, influencers and survivors are banding together to save as many lives as possible.”

NEW YORK, NY, UNITED STATES OF AMERICA, January 29, 2019 — This February, as New York Fashion Week (NYFW) slips into style overload at Spring Studios, Supermodels Unlimited Magazine (SU) is taking a moment to reflect. Suicide is the second leading cause of death amongst all young people. Every life is precious, whether you identify as straight and cisgender, or lesbian, gay, bisexual, transgender, queer, or questioning (LGBTQ). Sadly, LGBTQ youth are nearly five times more likely to attempt suicide than their peers. To raise awareness of suicide prevention resources and programs, we invite you to join SU, for their annual runway show; benefiting The Trevor Project – the world’s largest suicide prevention and crisis intervention organization for LGBTQ youth.

This season’s benefit is titled #YOLO: You Only Live Once. As countless teens across America are facing discrimination and bullying – SU has curated a collective of strong voices to inspire and motivate teens to stand up to societal pressure; encouraging young adults to reach out for support. “No child or teen should ever feel their dreams are out of reach;” says Kimberly Clark, publisher and editor-in-chief of Supermodels Unlimited Magazine, “they need our help now more than ever. We are so thankful that these models, celebrities, influencers and survivors are banding together to save as many lives as possible.” In the spirit of NYFW’s legendary “House of Paul,” this showcase is a tribute to those who have been lost, so that others may be saved. In support of The Trevor Project, Supermodels Unlimited Magazine proudly presents: THE #YOLO SHOW; 6:30pm on February 9th, 2019.

The show is hosted by Jordan Kimball from ABC’s The Bachelorette, and Bachelor in Paradise, with celebrity DJ James Kennedy from Bravo’s Vanderpump Rules. Walking the SU runway are models from diverse backgrounds including: Laura Kirkpatrick and Jeana Turner from America’s Next Top Model (ANTM), and Kasey Cohen from Bravo’s Below Deck. Joining them are other noted influencers, who will walk honoring family members, friends and designers such as Kate Spade and L’Wren Scott. Fashion designers Michael Costello, Edmond Newton, and Kelly Dempsey from Lifetime’s Project Runway are lending their support to the cause by presenting custom designs at the show. Making her runway debut is Mira Mariah, a social media maven and the personal tattoo artist for Ariana Grande. Mira is on a mission representing empowerment of all women and diversity. Joining her, is military and fashion photographer Erika Barker, who has appeared on MTV’s True Life and Oxygen’s STRUT – she’s walking in support of trans military personnel facing political persecution in America.

The show will conclude with a music tribute by Effie Passero from ABC’s American Idol, followed by a check presentation to The Trevor Project. SU will host a champagne reception from 8-9PM giving guests and media an opportunity to spend time with the participants and discuss the important work still needed to end this crisis. SU wants every individual who may need support to know that help is always available; individuals who do not identify as LGBTQ are able to access services, thanks to the National Suicide Prevention Lifeline, at 1-800-273-TALK (8255) or through the Crisis Text Line – text TALK to 741-741.

About Supermodels Unlimited Magazine:
Supermodels Unlimited Magazine is a leading publication on the women’s market that is dedicated to inspiring and empowering females. Now in its 19th year of publication, SU has taken over the modeling industry as a vital resource for both aspiring and established models and industry professionals. In the spirit of philanthropy, SU works closely with numerous celebrities and causes to promote inclusion.

About The Trevor Project:
The Trevor Project is the world’s largest organization providing crisis intervention and suicide prevention services to lesbian, gay, bisexual, transgender and questioning (LGBTQ) young people. The Trevor Project offers a suite of crisis intervention and suicide prevention programs, including TrevorLifeline, TrevorText, and TrevorChat as well as a peer-to-peer social network support for LGBTQ young people under the age of 25, TrevorSpace. Trevor also offers an education program with resources for youth-serving adults and organizations, a legislative advocacy department fighting for pro-LGBTQ legislation and against anti-LGBTQ rhetoric/policy positions, and conducts research to discover the most effective means to help young LGBTQ people in crisis and end suicide. If you or someone you know is feeling hopeless or suicidal, our TrevorLifeline crisis counselors are available 24/7/365 at 1-866-488-7386. www.TheTrevorProject.org