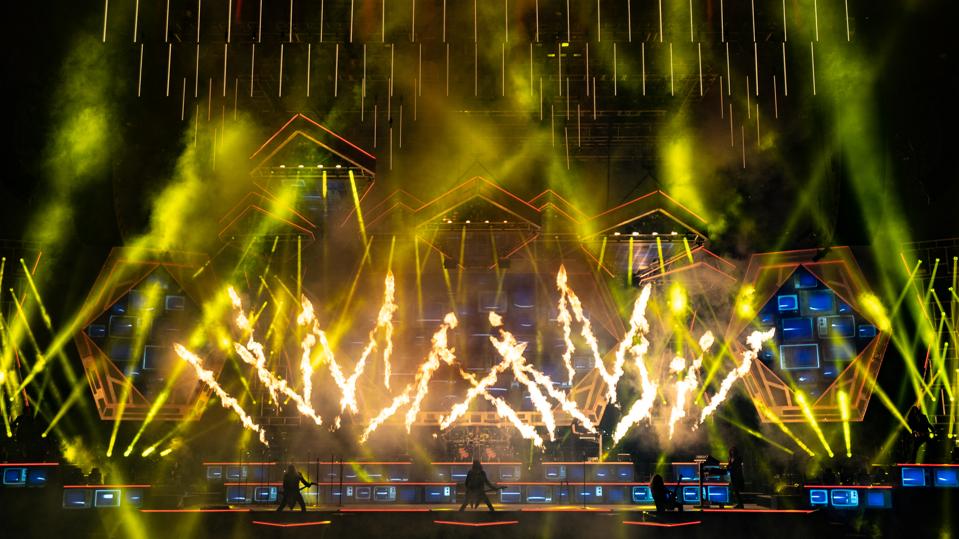 Holiday traditions may run their course, but as Tran-Siberian Orchestra marks another season and over two decades of multi-platinum rock theater marked by spectacular light shows and pyrotechnic gymnastics, there is no denying its staying power. TSO landed the No. 6 spot on Pollstar’s 2019 Top 100 North American Tours chart and TSO management notes that Billboard estimates their 2019 box office could approach $60 million this year, not shocking for an organization that has grossed $546.1 million to date, according to Billboard (based on Billboard Boxscore data).

With two teams (East/West) crossing the country for 109 musical performances on their 2019 “Christmas Eve and Other Stories” tour, TSO will cover 66 cities within a seven-week window while mastering a complicated, fast-paced puzzle that changes across venues, requiring extreme attention to detail from all 250 members of the organization. TSO has 40 trucks and 20 buses on the road during tour season, and a 350-mile drive between venues isn’t unusual. Eight shows in five days, three cities in a row and two shows a day for three straight days is commonplace.

“And they’re hanging, you know, 120,000 pounds from the ceiling,” adds Kenny Kaplan of TSO’s Castle Management noting the lighting piece of that puzzle. Set-up and tear down is a way of life for the team with a fanbase that has come to expect extreme special effects (TSO’s 2016 packing list included 20 snow machines, 34 industrial fans, and 35 fog and haze machines.). With an attendance rate that is dominated by “repeat attenders” (Kaplan estimates that these veteran concert goers make up approximately 65-70% of the audience.), there is no turning back when it comes to dialing up the details.

The 2019 tour includes 18 musicians per team plus local strings in each city. Backing them up this year—$1 million in pyrotechnics, something that TSO’s founder, the late Paul O’Neill would have likely sanctioned given his propensity to light up the stage in a bigger, brighter and better way each year. After O’Neill’s sudden death in 2017, with his wife and daughter at the helm and a core of founding and longstanding TSO members like music director and lead guitarist Al Pitrelli, the team has focused on staying true to O’Neill’s vision.

“It’s more important to not only myself, but everybody in the organization to work that much harder to continue on with the trajectory that he created,” says Pitrelli. “And that’s always been kind of the mantra for TSO— it would be bigger and better this year than last year.”

Giving back is also in the mix and growing. TSO’s philanthropic history has yielded over $16 million in charity donations. This year $1 from every ticket sold will go to charity.

The East Coast/West Coast teams, while divided to cover the territory for performance demand, have also helped fuel creativity with two sets of experiences yielding unique live twists that each could implement.

Explains Pitrelli, “So we basically just grew together for the betterment of the show though. You see the thing, with this organization, the story is the star of the show. That was the tricky part, finding a bunch of selfless people that were going to understand that it’s not about you. It’s not your traditional rock and roll band. This is about bringing the story to life. Singers aren’t necessarily singers, they become characters in the story if they’re doing their job correctly. That was paramount to Paul. So everybody on this stage realizes that, yeah, you’ll have your moment to shine, but they’ve become so selfless because they want to bring the story to life.”

With a primarily holiday-based presence, TSO has managed to hold its own with traditional artists who dominate the holiday charts. This week, BuzzAngle’s Top 50 Albums in the holiday genre included TSO’s Christmas Eve and Other Stories (No. 24), The Christmas Attic (No. 39), and The Christmas Trilogy (No. 46).

The new “Christmas Eve and Other Stories” tour is a nod to the roots of TSO (It has been nearly ten years since the story has been told onstage.) and to the 2019 technological advances that make the show “all new”.

Says Kaplan, “This is the story that, you know, kind of brought everybody into TSO. This is the one that a lot of people relate to and they’re going to be able to see it in a different light.” More than a million dollars worth.