Treasure trove of Merseybeat music scene memorabilia from a venue that hosted early gigs by The Beatles sells for £60,000The Beatles were known to perform at Lathom Hall, Liverpool, and graced the stage there ten timesStuart Sutcliffe famously suffered a fractured skull during a backstage punch-up at the 19th-century venueIt was later turned into a cross between Madame Tussauds and Planet Hollywood by owner Brian Corrigan A life-sized silicone replica of John Lennon was sold, fetching £5,000 while the Lathom Hall stage made £500

By Jemma Carr For Mailonline

A vast collection of ‘weird and wonderful’ memorabilia from a music venue that hosted early Beatles gigs has sold for over £60,000.

Lathom Hall in Liverpool was one of the best known clubs on the Merseybeat music scene in the late 1950s and early 1960s and was later turned into a cross between Madame Tussauds and Planet Hollywood by current owner Brian Corrigan.

Over the past 30 years Mr Corrigan crammed the 19th-century hall full of music and movie memorabilia including several life-size mannequins of The Beatles, as well as an array of Hollywood-themed items.

The Beatles’s last appearance at the hall was in February 1961. Earlier that year the band’s original bassist, Stuart Sutcliffe, suffered a fractured skull during a backstage punch-up at the venue.

Sutcliffe died of a brain aneurysm 16 months later in Germany and although no definitive cause was ever proved, some believe his death stemmed from the incident at Lathom Hall.

Mr Corrigan, who is now selling the hall, consigned 285 lots for auction with Adam Partridge Auctioneers of Macclesfield, Cheshire.

James Spiridion, a valuer with Adam Partridge, said: ‘The owner has had the venue for several decades and felt like he’s had a good run and the time is right to move on.

‘He’s really into his pop culture and has crammed the place full of weird and wonderful memorabilia.

‘In all my time in this industry I had never seen a collection of this quality and size.’

A vast collection of ‘weird and wonderful’ memorabilia from Lathom Hall, Liverpool, has sold for over £60,000. The marquee lot was a life-sized, silicone replica of John Lennon, wearing a white ‘New York City’ T-shirt, blue jeans with leather boots and trademark sunglasses, which fetched £5,000 (left). A 5 foot 9 inch-tall model of Dracula in a coffin sold for £160 (right) 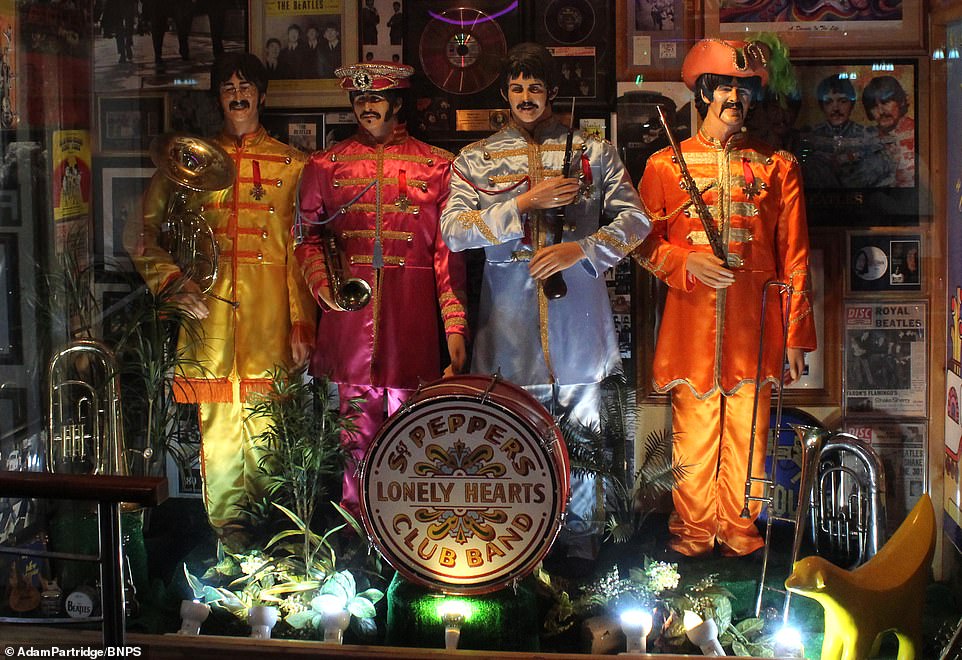 Lathom Hall was one of the best known clubs on the Merseybeat music scene in the late 1950s and early 1960s. Mannequins of all four Beatles as they appeared on the cover of their classic album Sgt. Pepper’s Lonely Hearts Club Band were up for grabs. These unusual models were made for the 30th anniversary of the iconic record and sold for £800 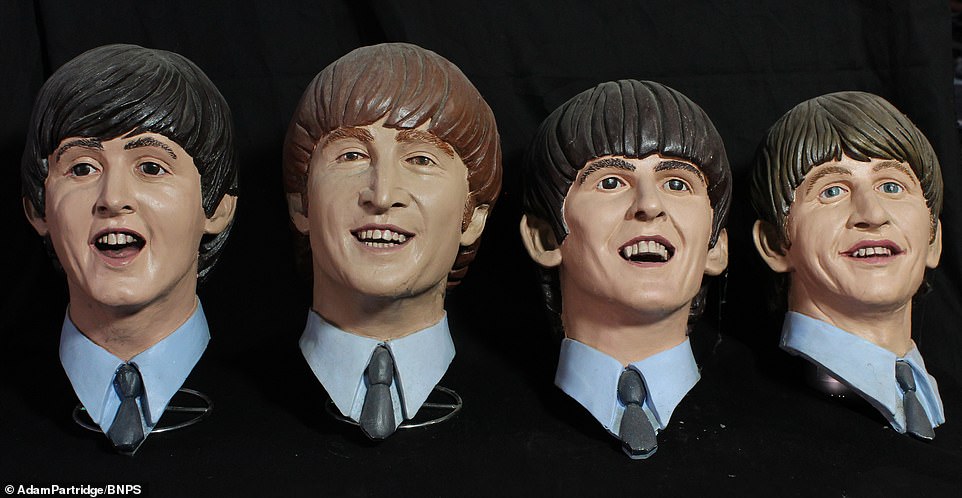 The hall was later turned into a cross between Madame Tussauds and Planet Hollywood by current owner Brian Corrigan. Busts of Paul McCartney, John Lennon, George Harrison and Ringo Starr sold for £130 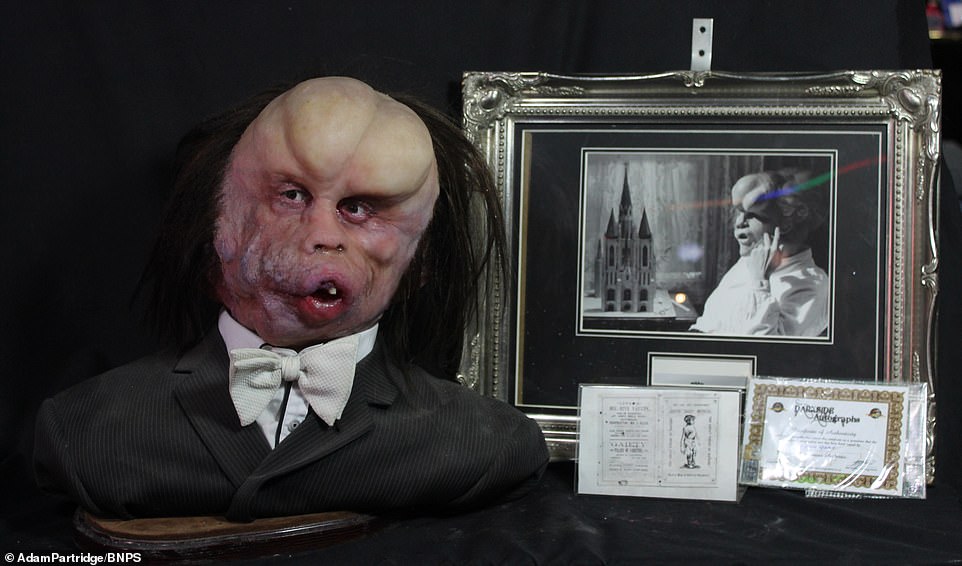 Over the past 30 years Mr Corrigan crammed the 19th century hall full of music and movie memorabilia that is now up for sale. A silicone bust from film The Elephant Man sold for £85 after it was estimated to make between £200 and £300 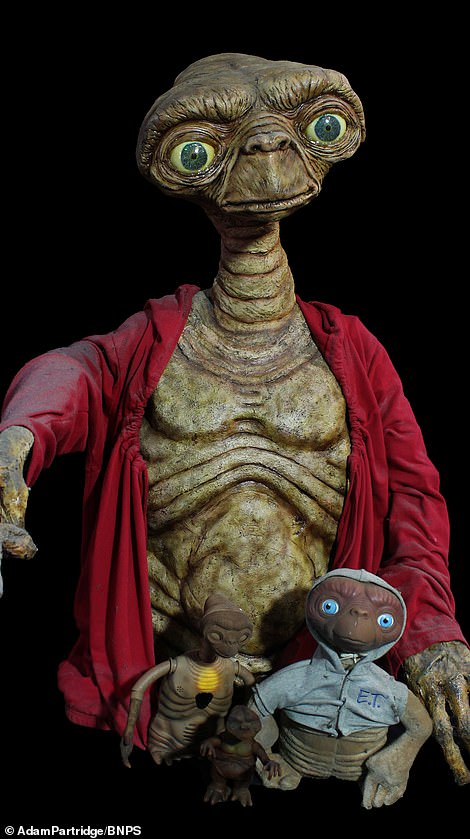 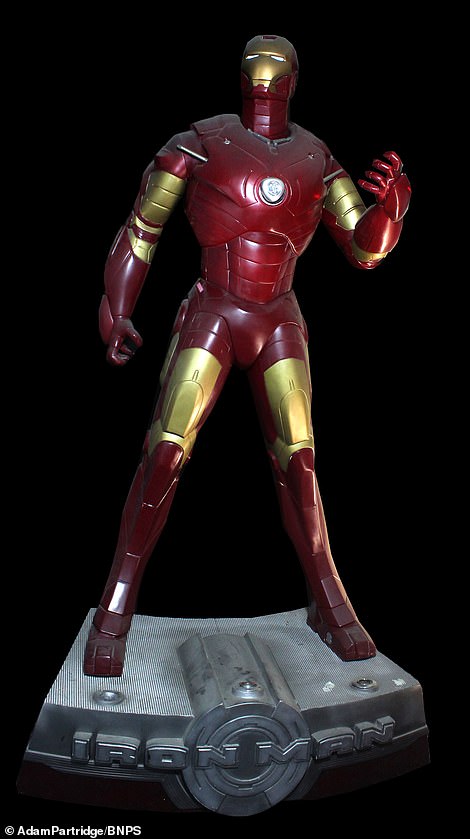 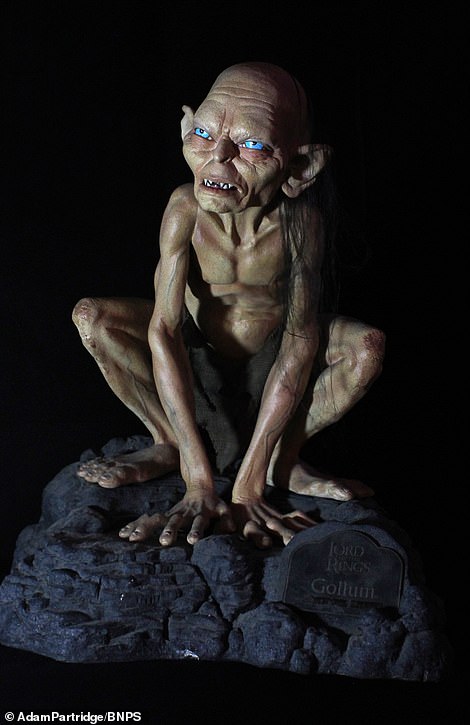 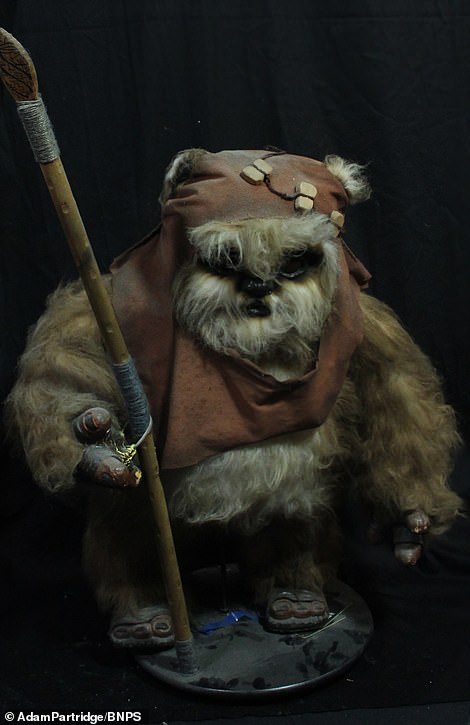 A figure of Gollum from Lord of the Rings sold for £200 (left) while an Ewok figure from Star Wars made £180 at auction, more than double its estimate of between £40 and £60 (right) 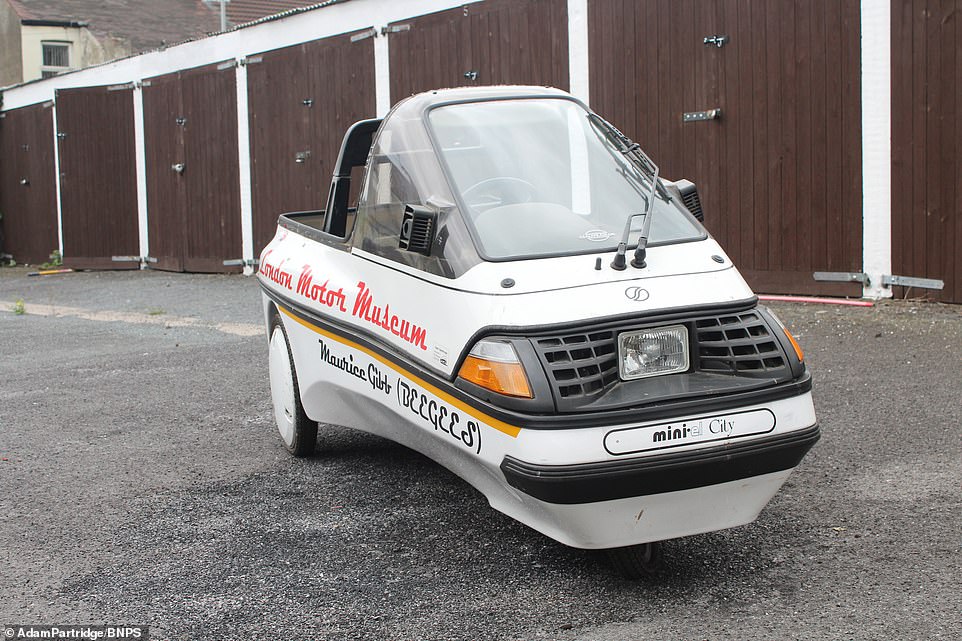 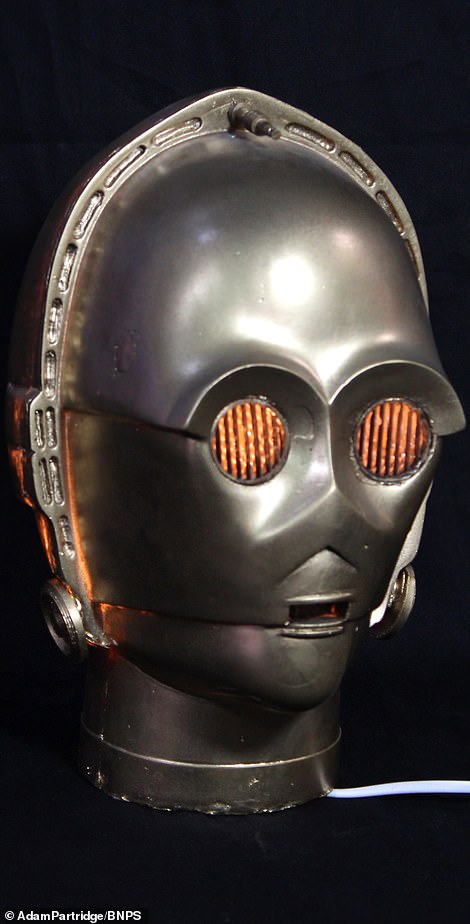 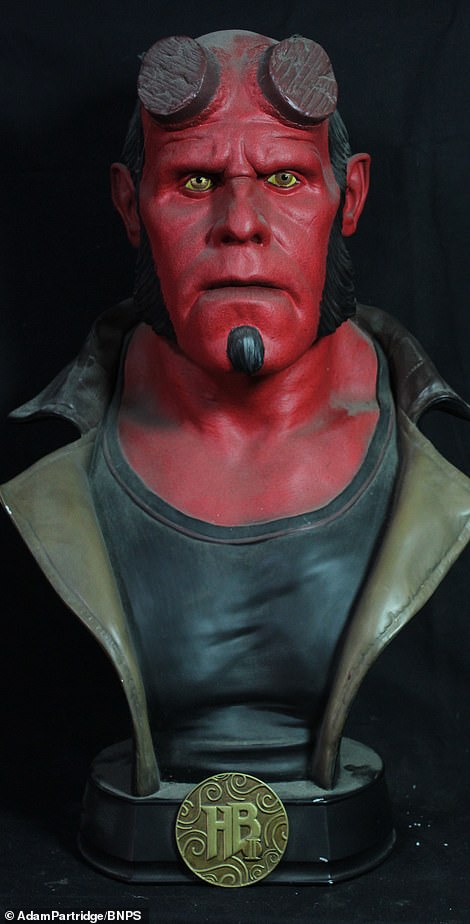 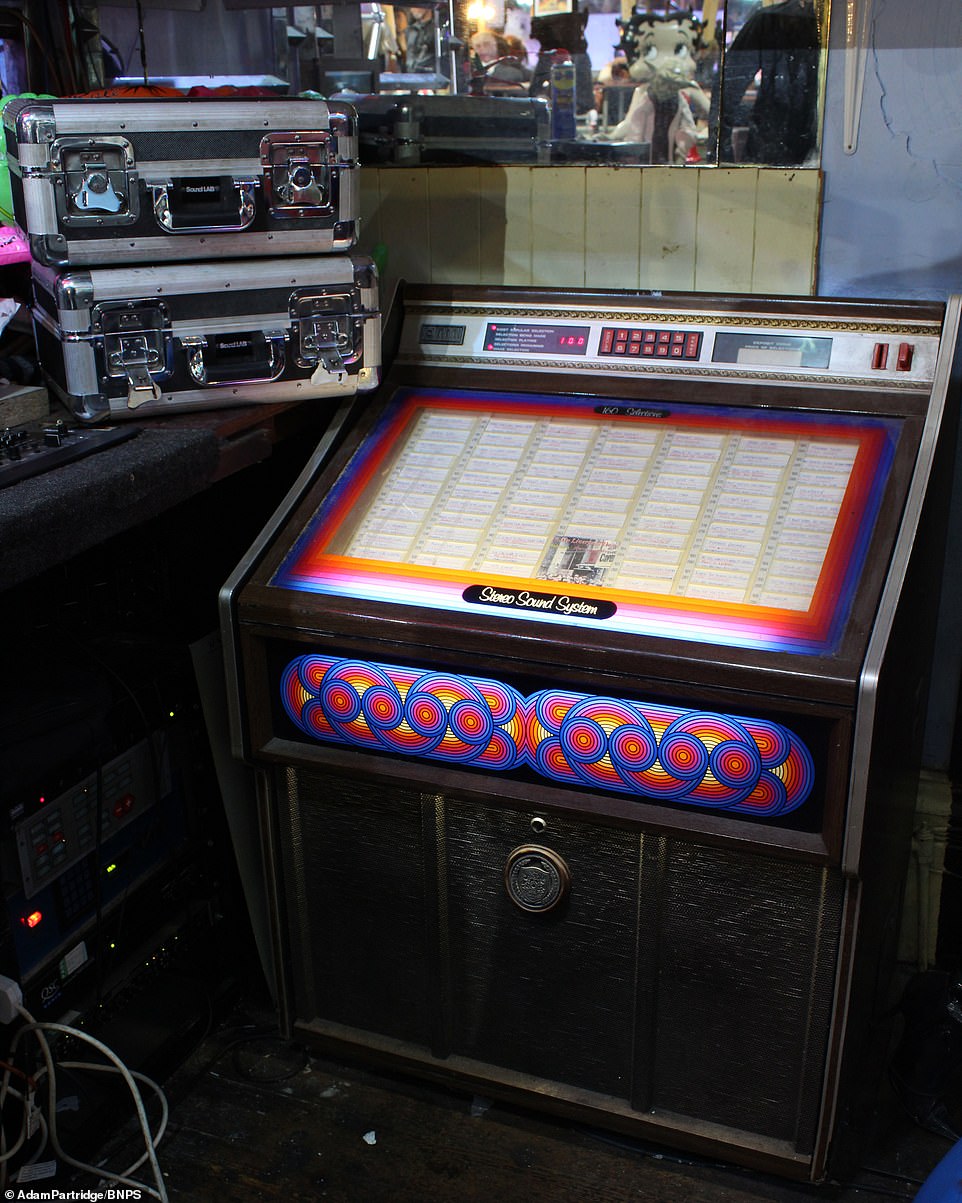 A 1970s jukebox with a selection of records including ones by Elvis, The Beatles, Billy Fury, Roy Orbison and Sonny & Cher sold for £380 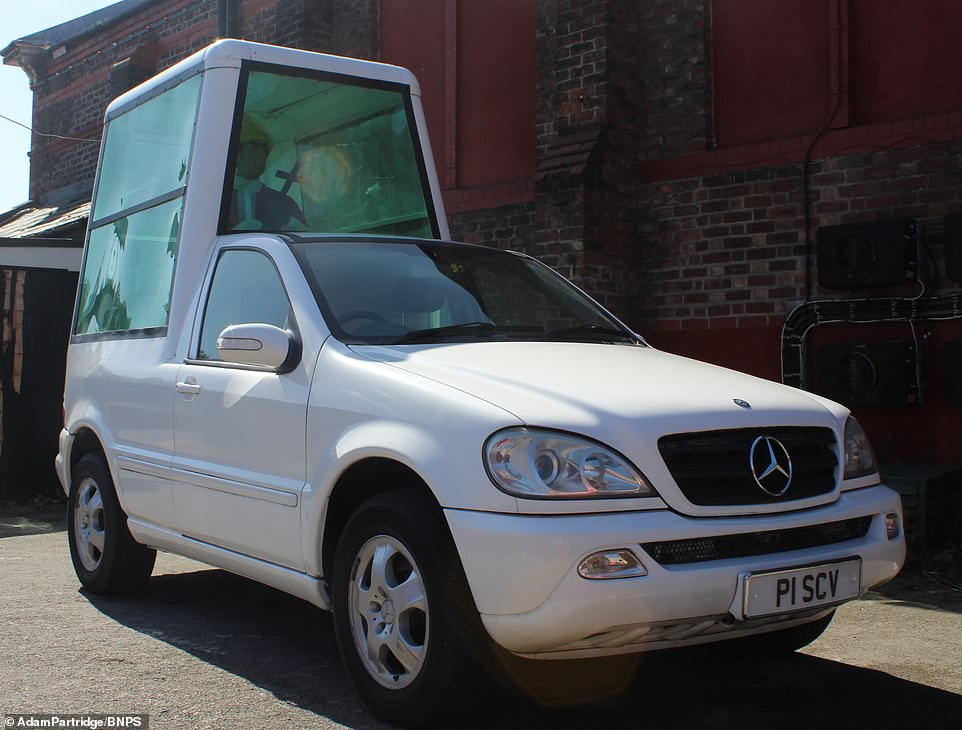 A replica Pope-mobile, that bookmakers Irish PaddyPower used as part of an advertising campaign, fetched £1,900