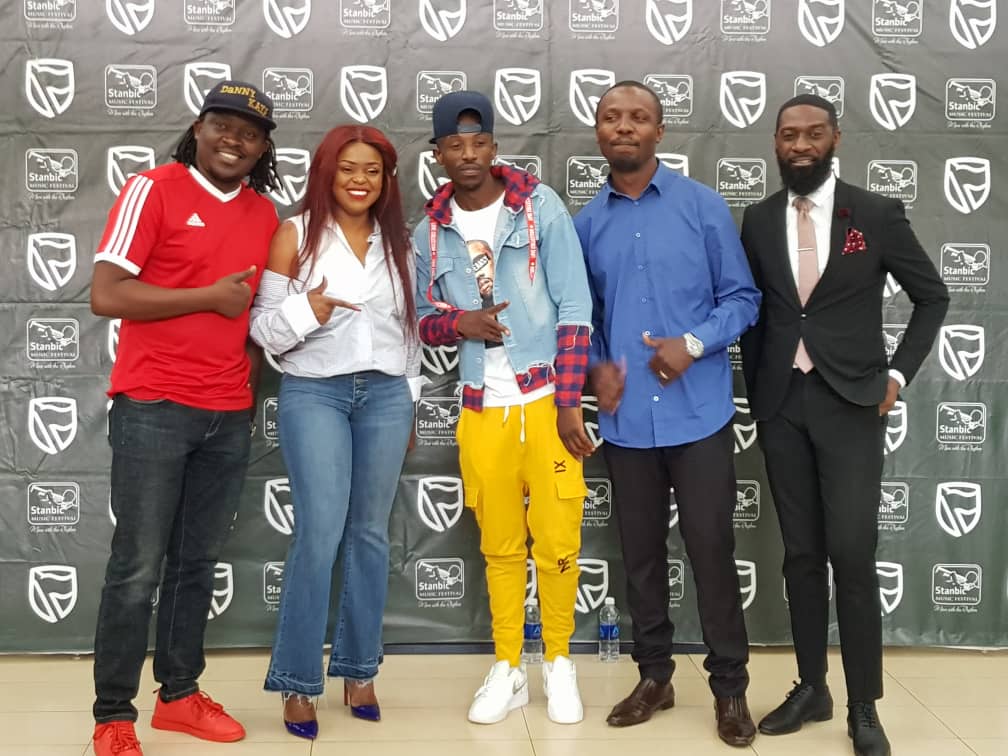 With less than three days to go before Zambia’s biggest music event – the Stanbic Music Festival – local artists have assured fans of a memorable concert.

The artistes made the assurance at a press conference in Lusaka this morning.

This year’s Stanbic Music Festival, whic will be headlined by American R&B icon Brandy and Nigerian Afrobeat sensation Davido, slated for October 4 and 5..

The bank-sponsored mega-concert was created as a way of putting Zambian artists on the spotlight by creating a platform on which world-renowned acts can share the stage with them. The event plays a big role in helping Zed artists hone their ability to organise and perform in front of huge crowds at international level, aiding the growth of the Zambian music industry.

Chef 187 – Fresh off releasing his widely acclaimed fourth studio album, Bon Appetite, Zambia’s hottest hip-hop artist is set to serve his fans with a healthy helping of his old and latest hits when he takes to the stage this Saturday. The “Tuleya Tulekula” artists has grown to be one of Zambia’s most sought-after artists thanks to his multi-layered lyrics, intricate wordplay and the storytelling ability in his music. Chef 187 recently collaborated with Nigerian Stars Mr P and Skales on “One More” and the club banger “Coordinate” respectively.

Danny – The legendary artist – making his first appearance at the Stanbic Music Festival – has had a long and successful career on the local music scene with 10 studio albums over a 20-year career. Danny has a distinct sound called Zamragga that carries subtle influences from dancehall and Afropop. He rose to prominence through his timeless and thought-provoking albeit sometimes controversial lyrics that touch on various social issues.

Izrael – Easily one of the most beloved singers in Zambian music. His unique vocals and writing ability have made him the go-to artist for several performers seeking to add an ageless hook to their record. Izrael’s skill with a pen and iconic voice has earned him a well-deserved legendary status in Zambia’s music industry having written songs and hooks for top acts like JK, Afunika, CQ, Black Muntu, Joe Chibangu, Shatel, Brayan, Macky 2, Ruff Kid, Nalu and Lily T among others.

Afunika – Known as the ‘king of the new version of Kalindula,’ the Chingola-born star has made an indelible mark on the Zambian music scene with his outstanding lyrical talent and distinctive sound. Over the years, Afunika has won the adoration of music lovers across the country with hits like Free to Mingle, Alilowa, Chimusebo, Bana Chimbusa, and Piki-Piki skirt – with over 1.1 million views on YouTube.

Mampi – The Queen Diva is one of Zambia’s biggest pop and R&B artists. Known for her kwaito and reggae influenced music and electric live performances, Mampi has countless hit singles under her name including Chimo ni chimo, Walilowelela, Why, and Nima Sobela yatu. Since bursting onto the Zambian music scene in 2003, the multi-award-winning songbird has released four albums and has performed at several shows in various countries around the world.

With the enormous talent on display, this year’s Stanbic Music Festival is set to be one of the best editions yet. The artistes’ varying styles and genres will ensure that fans get to experience different versions of Zambian music at the two-day event.

Golden circle tickets are sold out leaving only a few VIP and ordinary tickets available.