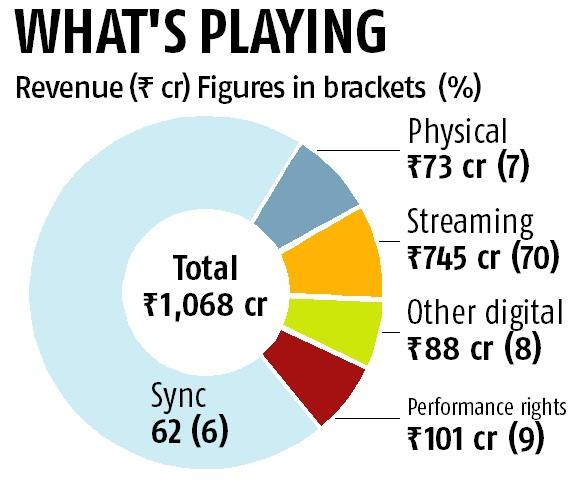 The Indian music industry is growing, but in bits and bytes. Both audio and video streaming grew 30 per cent during the earlier part of the year. Streaming now brings in 70 per cent of the Rs 1,068 crore the industry made in early 2019.


The remainder came from physical sales, performance rights, and other revenues, according to the latest Digital Music Study 2019 from the Indian Music Industry (IMI), which represents the Indian recorded music industry and is affiliated to the International Federation of Phonographic Industry (IFPI).


The study is based on a sample of 3,000 Indians aged 16-64, who were interviewed earlier this year.


The feel good numbers suggest that Indians spent more than 19 hours a week listening to music, and 97 per cent of them did so on a smartphone device.


However, the numbers get pretty sad after that. The biggest issue is the disparity between the amount of time people spent on a medium or method, and the revenues it brought. For instance, video streaming as a share of total listenership grew from 45 per cent in 2018, to 55 per cent in 2019. However, its contribution to revenues fell from 20 per cent to 18 per cent.


The radio industry, which accounted for close to 22 per cent of listening, brought in just under 3 per cent of revenues. It should be noted that the video streaming industry is about five times and radio over three times the size of the music industry.


“Such discrepancies in revenue contribution may be attributed to legislative and regulatory impediments that inhibit the return of fair value to rights holders,” says the study. In radio, for instance, royalty is mandated at 2 per cent of advertising revenues by the Copyright Board.


This is an anomaly by any standards. In most industries, revenues are usually indexed to the audience share. For instance, given that just over half the TV industry’s viewership comes from general entertainment channels, a similar proportion of its ad revenues come from the same medium.


That is how advertisers operate in a free market. The discrepancy in music is particular bad if you know that unlike TV, piracy is killing 67 per cent of market. A new form is that of social media apps, which allow users to share unlicensed sound recordings.


The good news is that subscription-based or paid streaming services accounted for 27 per cent of total revenues. That is roughly in line with video streaming, incidentally.

Streaming revenue showed growth of 30.9% and was the main contributor, accounting for 70% of the overall revenues