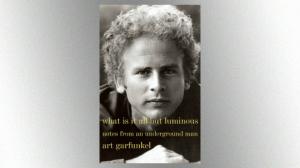 The cover to Art Garfunkel’s new book: “What is All But Luminous.”

Los Angeles, California—–September 2017—–Grand Performances and Scripps Presents in partnership with SAG-AFTRA present a special literary event with the extraordinary vocalist and icon Art Garfunkel. Garfunkel is one half of what is arguably the most famous musical duo of all time, Simon & Garfunkel. In his only Los Angeles appearance in support of the book’s publication, Garfunkel will sit down with award-winning journalist, Alex Cohen of KPCC for a candid conversation about the memoir the New York Daily News describes as, “Witty, candid and wildly imaginative…a highly intelligent man trying to make sense of his extraordinary life.”
This special evening at the Grand Performances stage located at California Plaza (350 S. Grand Avenue) promises to provide intimate and behind-the-scenes perspective on Mr. Garfunkel’s longtime partnership with Paul Simon during one of a generation’s most vibrant musical eras.

THIS IS A TICKETED EVENT. Ticket packages include 2 tickets plus a book and 1 ticket plus a book; all books will be signed in advance by Mr. Garfunkel Book and ticket packages can be purchased at: grandperformances.org/garfunkel

About the Author
Art Garfunkel attended Columbia University, where he earned a master’s degree in mathematics. He performed with Paul Simon as Simon & Garfunkel from 1963 to 1970. Garfunkel, with Paul Simon, has been the recipient of six Grammys, the Grammy Lifetime Achievement Award, and in 1990 was inducted into the Rock & Roll Hall of Fame. Garfunkel lives in New York with his wife and two children. He continues to travel around the world giving concert performances, and since 1973 has produced twelve solo albums.

Alex Cohen is the local host of “Morning Edition”, NPR’s most popular show. Prior to that, she was co-host of KPCC’s “Take Two” and “All Things Considered.” Before joining Southern California Public Radio, Alex was a host and reporter for NPR’s “Day to Day.” She’s also served as a host and reporter for American Public Media’s “Marketplace” and “Weekend America.” Prior to that, she was the L.A. Bureau Chief for KQED FM in San Francisco. She has won several journalism awards including the LA Press Club’s Best Radio Anchor prize.

MORE ON GRAND PERFORMANCES:  Celebrating its 31st year, Grand Performances’ mission is to inspire community, celebrate diversity, and unite Los Angeles through free access to global performing arts. Hailed as the “Best Free Outdoor Summer Concert Series” by Los Angeles Magazine and called “a grand gift to the public… democracy in musical action” by the Los Angeles Times, Grand Performances presents high-quality music, dance, theater, and more during the summer at the breathtaking California Plaza in the heart of Downtown as well as at other venues throughout the year including the Los Angeles State Historic Park and Los Angeles World Airports.   Partner organization Scripps Presents offers an electrifying mix of storytellers and artists, policymakers and musicians—and everything in between. Making its home at Scripps College in Claremont, California, Scripps Presents travels to downtown LA to bring this special event, as one in a series of presenting thinkers and doers, writers and performers whose passion and perspective are changing the way we see the world.