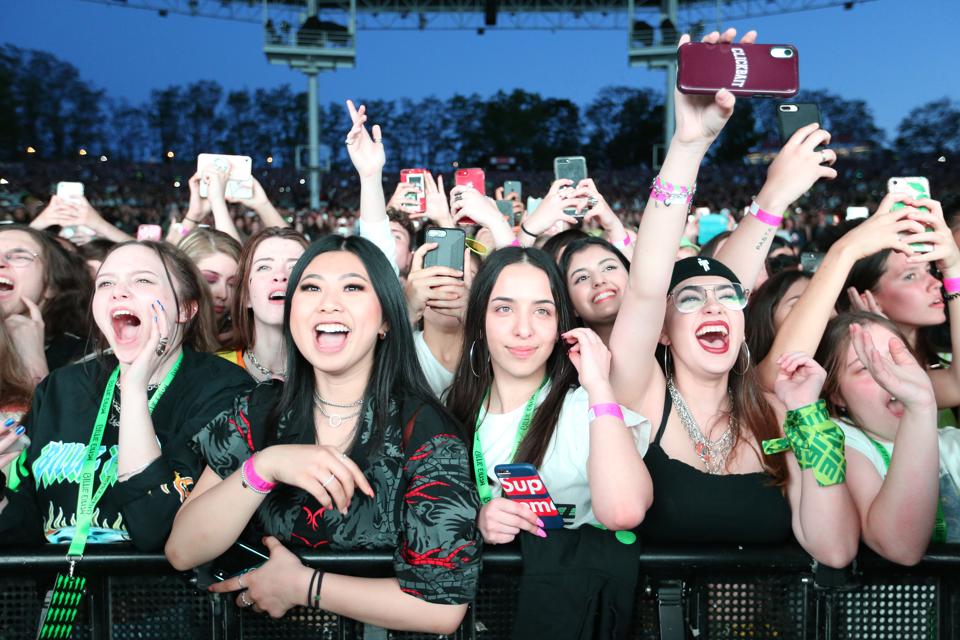 What’s your favorite music? According to scientists, the song that you have on repeat is probably both predictable and unpredictable at the same time.

For example, there are certain chord progressions that occur very often, which contribute to the predictable nature of music. But at the same time, you don’t want it to be too predictable. An occasional surprise note, dropped beat, change in tempo or key change keeps the music interesting. The combination of familiarity and surprises ultimately leads to the activation of reward centers in the brain. Put simply: you like that tune.

According to scientists, people enjoy music that has some familiar elements as well as surprises. … [+] These Billie Eilish fans at a concert in Toronto could probably relate to that as a general description of Eilish’s music, but scientists have now found a way to matematically describe how “predictable” a tune is, and showed that people’s favorite music is neither too predictable, nor too complex. (Steve Russell/Toronto Star via Getty Images)

But that all sounds a bit vague. Who is to say what people find predictable or unpredictable? To try to answer that question, researchers from McGill University in Montreal, Canada, found a new way to study predictability in music.

They used a mathematical model to determine how predictable or unpredictable a musical fragment is. Then they asked volunteers to listen to different pieces of music and rate how much they liked them, and learned that the most well-liked music has a somewhat intermediate level of predictability.

To create the model of predictability, the researchers used an existing method that can express certain aspects of musical predictability in a computational way. Essentially, anything musical can be expressed as computer code – from the pitch and length of the notes to the loudness, tempo, and musical key. So anything that’s predictable or unpredictable about a piece of music can be entirely reduced to code.

But to find out what’s predictable or not, the system has to first learn the common characteristics of most music. For this study, the model was created based on music that follows the rules of Western classical music and folk music of European cultural origins. It’s the same system that a lot of pop and rock music uses, but it’s different from styles such as jazz, Chinese classical music or folk music from the Middle East. Those styles (and many others) each have their own set of music rules. For this reason, a few volunteers who said that their favorite music was jazz music were excluded from the experiment. (Considering the study was carried out in the city that hosts the largest jazz festival in the world, finding jazz lovers wasn’t entirely unexpected!)

The entire experiment was essentially created for people whose normal music listening experience was similar to what the computer model was trained on.

But for the volunteers whose favorite music includes music that follows the Western music system (which was most of them), the experiment showed that there is a certain level of musical predictability that people most preferred.

Like Goldilocks, music listeners found a happy medium that was just right for them.