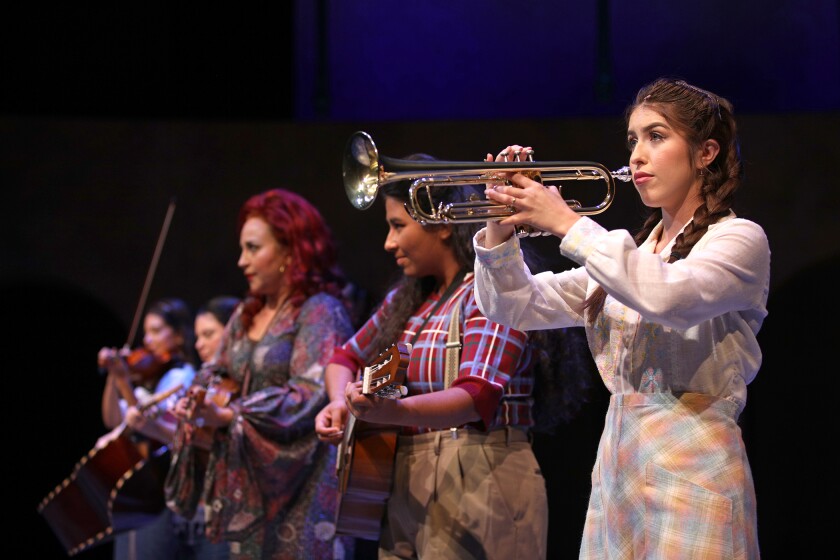 This goes a long way toward explaining the inspirational vibe of “American Mariachi,” a seriocomic tale wrapped in culture, tradition and music. The show launches a new season at South Coast Repertory in Costa Mesa, the first to be programmed by its new artistic director, David Ivers, and it sends a message about the ways in which he has said he hopes to deepen SCR’s connections to the community, in all of its diversity.

To judge by audience response, the show is performing as expected. As the story reached its culmination at an opening weekend matinee, the sniffles of emotional theatergoers mingled with vibrant mariachi music, and the room rang with applause.

It’s hard to resist mariachi tunes, with their insistent rhythms and invigorating tempos. They quicken the pulse of this show in ways that the story rarely does. Even at a brief 97 minutes, the presentation is a bit of a slog because viewers can predict the ending before the action has properly begun.

That doesn’t seem to be hindering José Cruz González’s family-friendly play, however. It was introduced in early 2018 at Denver Center for the Performing Arts, where it was commissioned and developed, then seen at the Old Globe in San Diego. It has since been staged in Arizona, with Chicago and Dallas productions scheduled.

Folding relatable domestic hardships into a narrative about self-actualization and empowerment, “American Mariachi” takes place in the mid-1970s in a working-class Chicano household. Lucha (Gabriela Carrillo), who’s in her early 20s, is a nursing student whose studies are increasingly overwhelmed by taking care of her mother (Diana Burbano), who is receding into dementia.

By chance, Lucha plays a mariachi recording that momentarily awakens Mom’s memory and restores her luster. When the irreplaceable vinyl gets broken, Lucha resolves to learn mariachi so that she can re-create the song. She’ll pull together an all-female band, she decides, although mariachi at the time is still a thoroughly male endeavor — a roadblock given human form in her father (Mauricio Mendoza), himself a mariachi, who has old-school attitudes about women’s roles.

Professional musicians deliver most of the mariachi tunes, all but a couple of which are culled from existing repertoire, while the actors convincingly grow into their instrumental duties. The singing is particularly exhilarating, especially when the female mariachis soar into shimmering harmony.

Comic moments that seem over-the-top to viewers steeped in the U.S. devotion to realism might not necessarily read that way to other theatergoers, whose shouts and guffaws reveal a fondness for the broader, more Latin American-style approach. Dia de los Muertos imagery lends a visual kick as well as a cultural touchstone.

The playwright’s association with SCR stretches to the mid-1980s. Most prominently, he created its Hispanic Playwrights Project, a script-development program that he ran for a decade. He’s also a theater educator, having recently retired after 30 years of teaching at Cal State L.A.

His new show appears to have sparked a joyful collaboration among director Christopher Acebo, music director Cynthia Reifler Flores, a dynamic ensemble of 14 and a detail-focused team of designers (bonus style points go to costume designer Kish Finnegan for her vintage-looking bell bottoms and the women’s stunning, floral-embroidered mariachi ensembles).

The young women of “American Mariachi” are eager to change 1970s society so they’ll have equal access to whatever they dream of doing. As they learn mariachi, they are trained in how to make that happen: by embracing discipline and delighting in discovery as they work to create something bigger than themselves. That’s music in action.