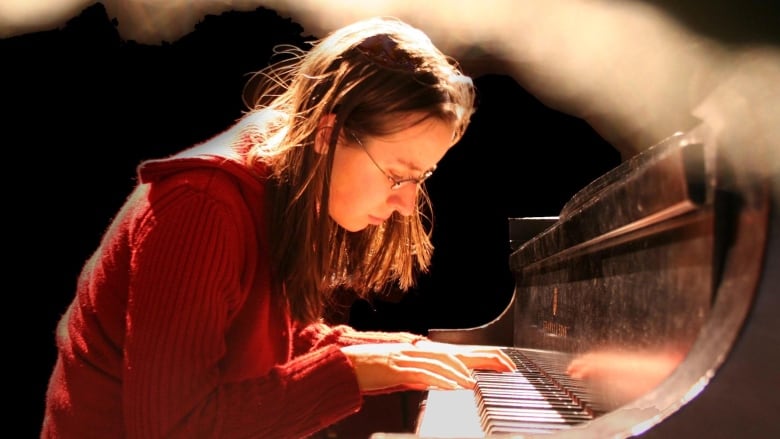 Yellowknife composer Carmen Braden had something to celebrate in Whitehorse Thursday night — she was named Composer of the Year at the Western Canadian Music Awards.

The ceremony is part of BreakOut West music festival, which runs through this weekend.

Braden said it feels good to win the award. Much of her music is experimental, using ambient sounds gathered from nature, so the accolade is a reinforcement that she’s doing something worthwhile.

“I explore new ideas and new ways of thinking about music and sound,” she said. “I’m not trying to kind of fit into any mould.”

Braden says many of the greats in her field — from Beethoven to Bach — also shook their music world, so she simply considers herself to be following a well-tread tradition. They were good at what they did — but they also took risks, she says.

Carmen Braden plays a tune from her 2017 album Ravens.

“Trying to find something that hadn’t been done before, new sounds and new ways of making musicians interact or play — that is what I think makes me excited about keeping on going,” she said.

Braden said she feels honoured not only for the win, but to be included as a nominee among people who helped shape her as a musician. Allan Gordon Bell and Laurie Radford, who both taught her at the University of Calgary when she was pursuing her Master’s degree there, were also nominated for the same category.

Farshid Samandari and Owen Underhill, both from British Columbia, were also nominated.

The ghost of Giant Mine

What’s next for Braden? She’s taking more musical risks. Her next project is an exploration of Yellowknife’s Giant Mine, a story she says has more “context and history and emotion” than some of the topics she’s dealt with before.

Giant Mine produced gold in Yellowknife from 1948 until 1999, and left behind 237,000 tonnes of extremely poisonous arsenic trioxide when it closed in 2004.

Braden says she is excited and nervous for the project.

“I’m thinking of it very much now in the context of … this kind of echo of the past that’s kind of still there, haunting us,” she said.

“The past is now gone and buried. But it still … haunts us and has a menacing power with all this arsenic and the cleanup that has to be done.”

The BreakOut West music festival and conference continues through Sunday.