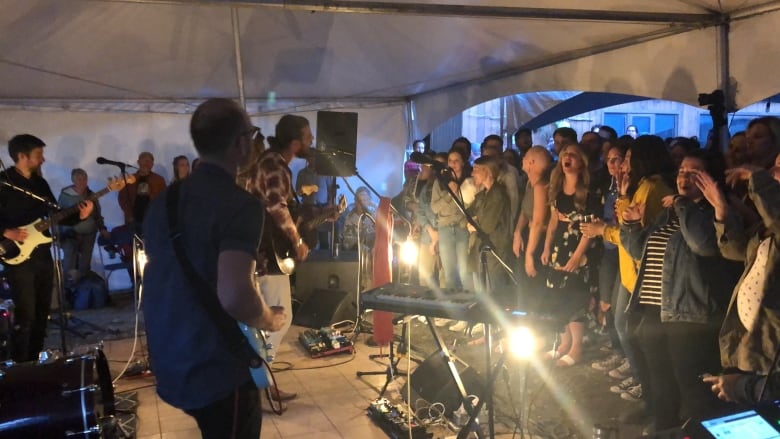 After almost 10 years living many musicians’ dream as a member of a successful band, one Yellowknife man is packing it in for a quiet life in his hometown.

Shea Alain is now a former member of Reuben and the Dark, an indie-folk band based in Calgary with two albums under its belt and many miles on the road, touring North America and Europe.

He sat down with The Trailbreaker host, Loren McGinnis, last week to discuss his music career, and what’s ahead.

Alain says he first met bandmate Reuben Bullock when he was living in Calgary, attending the Southern Alberta Institute of Technology.

“He was curating a little Christmas market and I applied to play at it,” he said.

“We started talking and he invited me to jam with him and his older brother, and we developed this connection.”

I think singing with someone who can sing well has always been a unique experience.- Shea Alain, former band member of Reuben and the Dark

At the time, Bullock had just recorded a solo album and asked Alain to join him for a live show celebrating its release. They started playing more shows, toured around Alberta and eventually signed with the record label Arts & Crafts in Toronto.

Alain said he originally got involved with Bullock out of a desire to meet people in Calgary. Then, of course, there were the harmonies.

“I think singing with someone who can sing well has always been a unique experience,” he said.

“In the sense of being connected with them and making a sound that can’t be reproduced on any other instrument. It’s very unique to those two people.”

Shea Alain and his wife, Isis Essery, got married last month. The day after their wedding, they celebrated with a final Reuben and the Dark show at the couple’s home. (Loren McGinnis/CBC) Professionalism on the road

During his years with Reuben and the Dark, Alain says he earned a reputation as the “band dad.”

He was the guy checking the coolant in the van, making sure everybody had a handle on the set lists, and emphasizing professionalism and punctuality.

“A big part of our band when we were first starting was … how are we being an ambassador to the band when we are not on stage?” said Alain.

Music was never something he sought out to do professionally. Alain’s vocation is actually respiratory therapy, which is what he is now practising in Yellowknife. On top of that, he recently got married and is gearing up to start a family.

Alain played his final show with Reuben in the Dark at his home along the Ingraham Trail outside Yellowknife just last month, as part of the celebration of marriage to his wife, Isis Essery, who works as a graphic designer.

Other than the time he crowd surfed at Yellowknife’s music festival, Folk on the Rocks, Alain says his wedding performance will probably live on as one of his favourite memories with the band.

He said he wanted that show to be a contribution to the Yellowknife community — a sort of thank you to extended friends and family who supported him along the way.

“When we first started touring, it was only Yellowknifers in the crowd,” said Alain.

“We’d tour to a new place and all my friends were in university, so we would go out to Vancouver and I had five Yellowknifers in the front row … The band had met all these people individually and now having them in one place is an interesting conclusion of my time with the band.”

Alain said he’s looking forward to the road ahead with his wife as well as the challenges and rewards that road will bring. The two are expecting their first child in December.