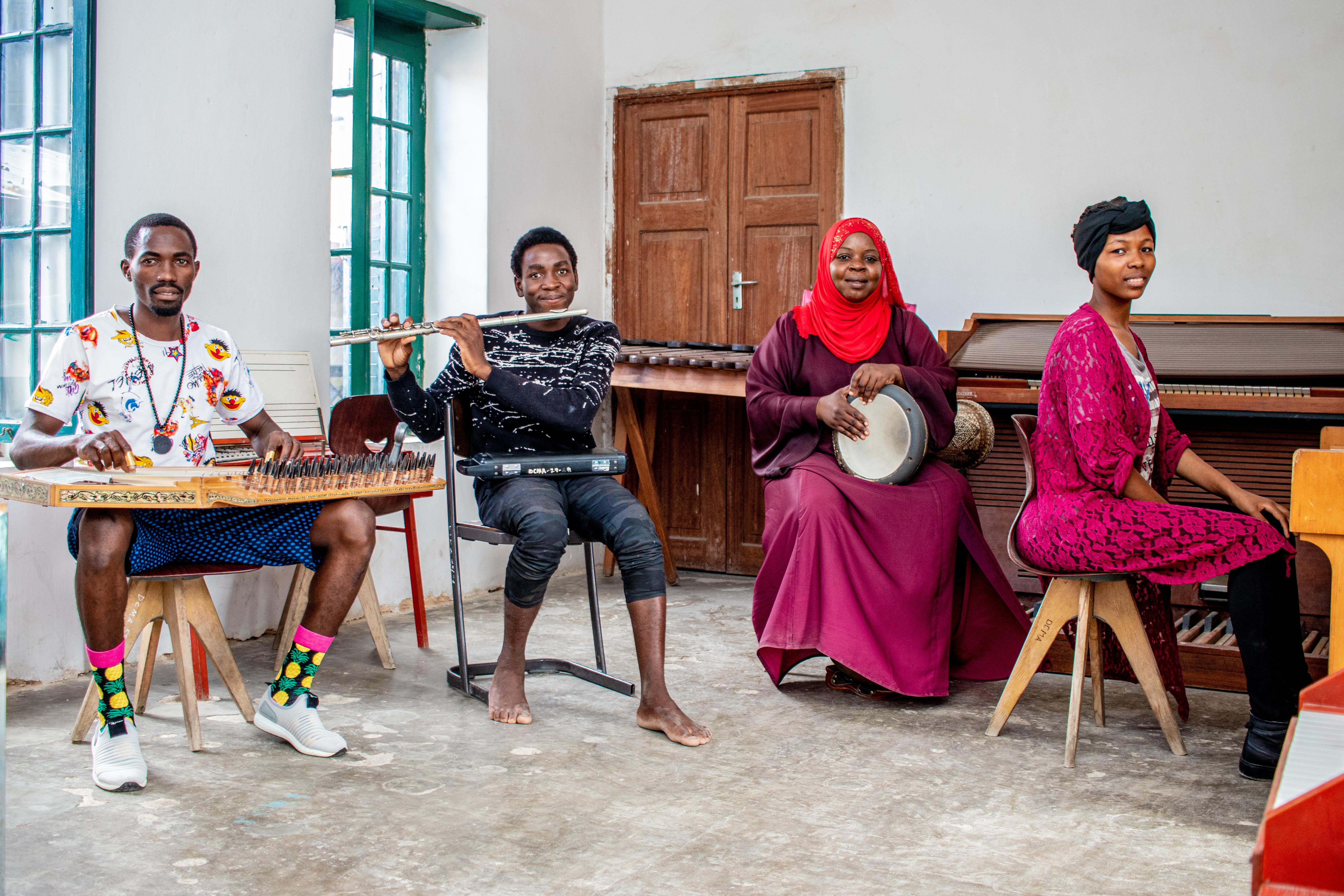 Thousands of visitors to the historic city of Stone Town, Zanzibar, have followed the sound of music to the Dhow Countries Music Academy (DCMA), a music school that promotes and preserves the islands’ musical traditions of the Swahili Coast along the Indian Ocean. Since 2002, the school has promoted and preserved the Zanzibar’s unique mix of Arab, Indian and African cultures through music.

After 17 years, the school faces a financial crisis that threatens its closure. Nearly 70% of its 80 full-time students can’t afford to pay their tuition, which comes to about $13 USD per month, according to an official DCMA press release. While the school has received support over the years from international donors and diplomatic missions, they face a gap in funding that may force them to shut their doors at the historic Old Customs House.

Without crucial funds to continue, DCMA students and staff fear that the soulful sounds that flow through the hallways of this iconic institution that make these islands sing — may cease. The school not only teaches and promotes traditional culture and heritage through music, but it’s also home to a community of young musicians who seek alternatives to making a living as creatives. 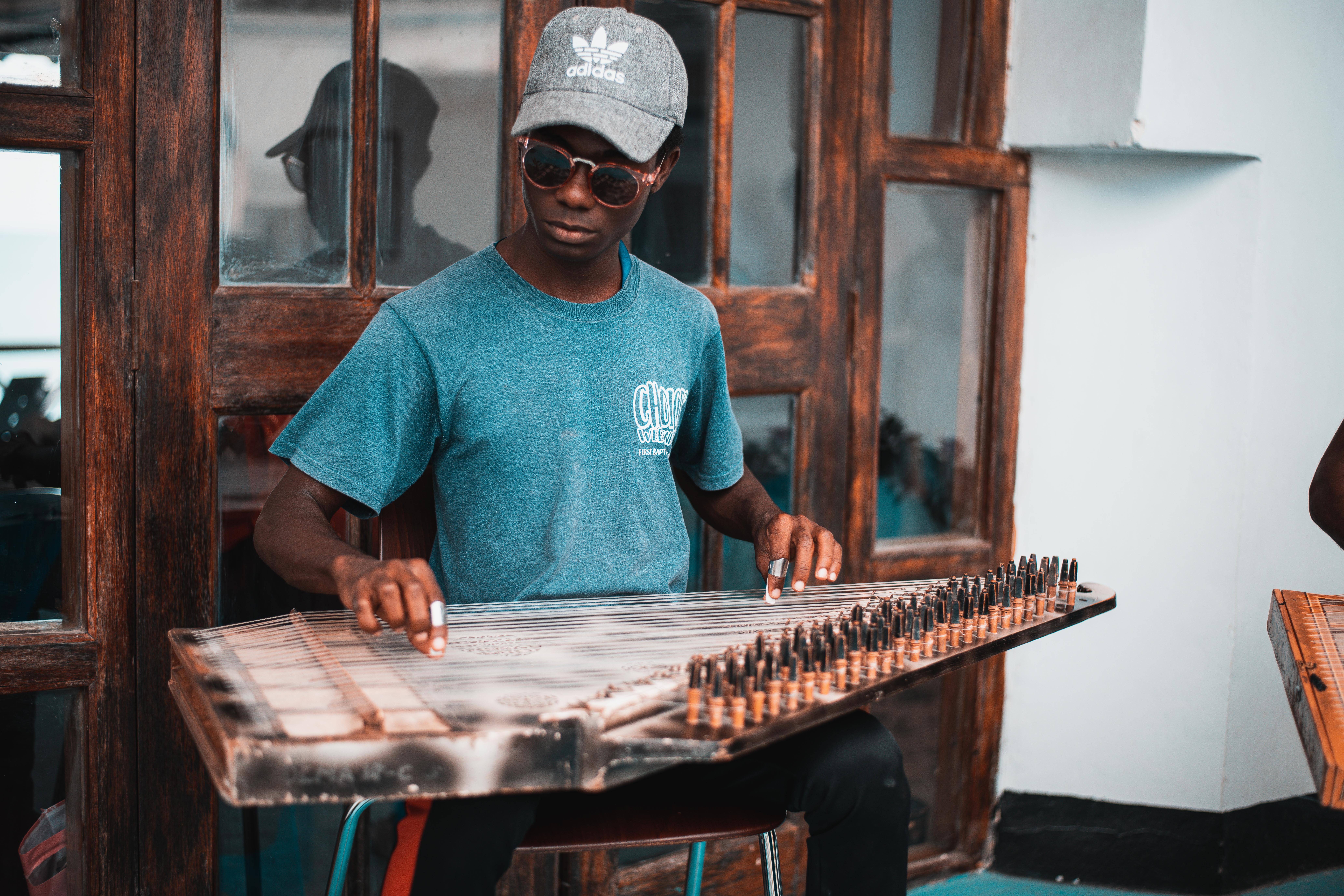 A DCMA student learns the qanun, a featured instrument in classical taarab songs. Photo courtesy of the DCMA.

“We [have started] to face a very challenging financial moment,” said Alessia Lombardo, managing director of the DCMA, in an official DCMA video. “From now to the next six months, we are not sure that we can guarantee the salaries to our teachers and staff.”

At the moment, 19 master teachers and small core staff have gone without salaries for over three months as the school struggles to secure strong funding partnerships and explore sustainable funding models for a school. While the archipelago is known as a tourist destination for its pristine beaches and luxury hotels, the majority of local people struggle with high unemployment even as poverty has slightly decreased, according to The World Bank.

For 17 years, the DCMA has worked tirelessly to promote and protect Zanzibar’s rich heritage and traditions through music. The birthplace of legendary taarab singers Siti Binti Saad and Fatuma Binti Baraka, or Bi. Kidude, Zanzibar is home to musical genres that emerged through cultural exchange and collaboration along the Swahili Coast for hundreds of years. Today, students can learn traditional musical genres like taarab, ngoma and kidumbak, along with instruments like drums, qanun and oud, as gatekeepers — and interpreters — of culture and tradition.

Neema Surri, a violin player at the DCMA, has been studying the violin since the age of 9. “I know many young people who would like to study music but they can’t afford the minimal tuition fee because they are poor and unemployed,” Surri said in the DCMA video. 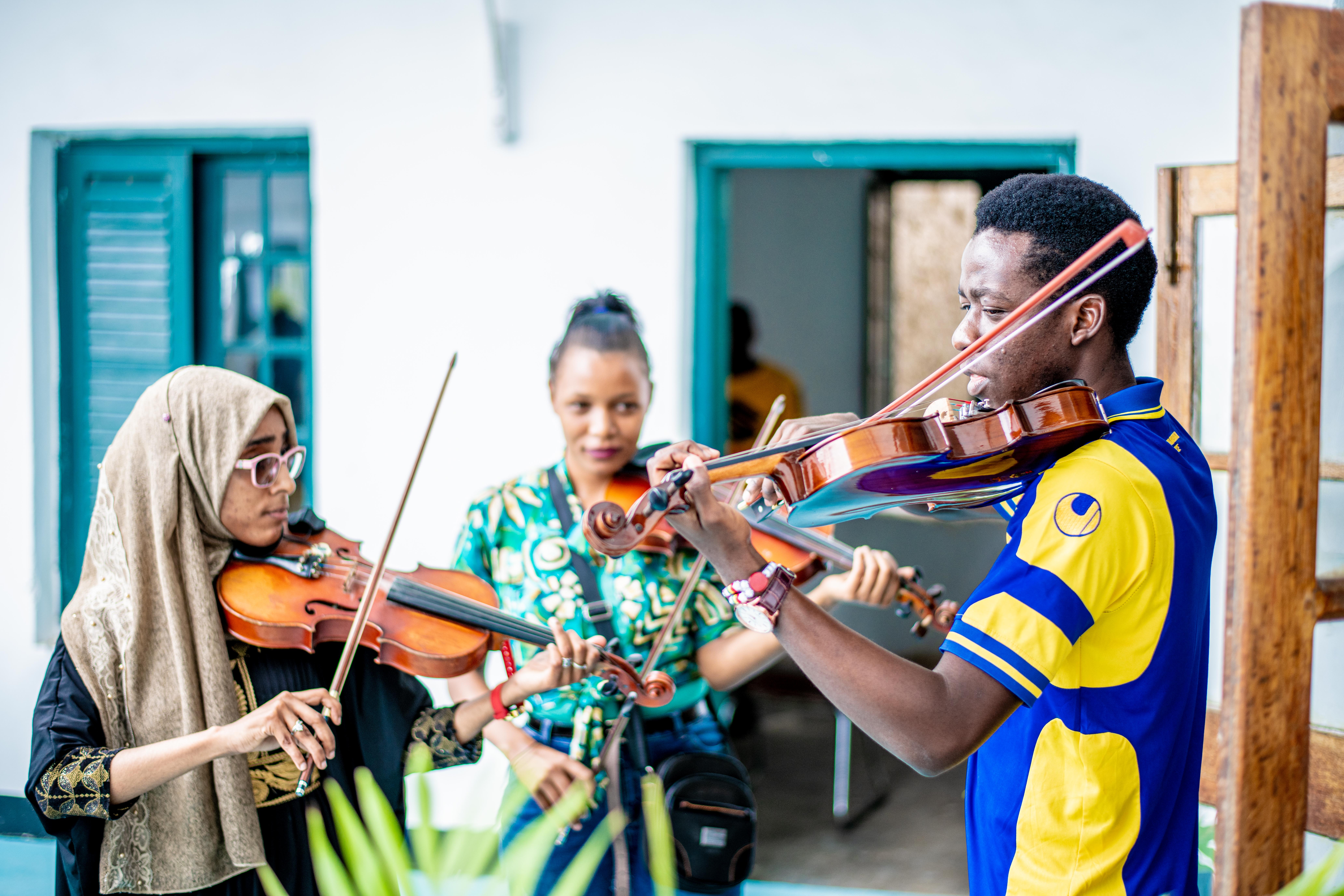 Students at the DCMA rehearse at the Old Customs House, where the school is based, in Stone Town, Zanzibar, 2019. Photo courtesy of the DCMA.

After completing DCMA workshops, certificate and diploma courses, many DCMA students go on to perform on world stages as award-winning bands and solo artists. Zanzibar’s Amina Omar Juma, a former DCMA student and current DCMA teacher, recently returned from a tour in South Africa with her critically acclaimed, “Siti and the Band,” known for “fusing the roots” by blending traditional taarab sounds with contemporary, layered rhythms. She and other band members, also former DCMA students, released their first full album, “Fusing the Roots,” in 2018, going on to perform at Sauti za Busara, East Africa’s largest music festival, that same year.

Here’s Siti and the Band’s “Nielewe” (“Understand Me”) and music video, depicting scenes from Zanzibar while telling the story of a woman who experiences domestic abuse and dreams of life in music, much like Omar Juma’s personal story:

A history of cultural crossroads and collaboration

Over 15,000 visitors have passed through the academy’s iconic building to enjoy live performances, workshops and classes and interact with passionate DCMA musicians who represent the future of Zanzibar culture and heritage, according to the DCMA. Drawing from a rich history of Indian, Arab and African exchange, the school celebrates the influence of “dhow countries,” drawing inspiration from cultures that converged along the Indian Ocean and the Persian Gulf.

The Omani Sultanate, a “major maritime force from the 17th to 19th centuries,” shifted its seat of power from Muscat to Zanzibar in 1840. From Stone Town, Omani kings oversaw elaborate systems of maritime trade, including cloves, gold, and textiles, powered by strong winds that set dhows – traditional Arab vessels —sailing across the Indian Ocean, from India to Oman to East Africa.

Young Zanzibaris recognize the importance of connecting with the past to determine their future and the music created today expresses that desire to bridge the old with the new. DCMA students and teachers recently formed “TaraJazz,” a blend of traditional taarab and modern jazz. Their violinist, Felician Mussa, 20, has only been studying the violin for 3.5 years; TaraJazz is one of the most sought-after bands on the islands, captured here by photographer Aline Coquelle:

The Swahili coast tells the story of epic cultural exchanges and the DCMA continues this tradition through its musical collaborations. Every year, the school hosts an initiative called “Swahili Encounters,” matching well-known musicians hailing from Africa, the Middle East, Europe and North America with DCMA students to create original musical compositions within a week-long period. At the end of the “encounter,” the newly-formed collaboration performs at Sauti za Busara, and many of these collaborations turn into life-time friendships that transcend the boundaries of language and culture, proving music is a universal language. 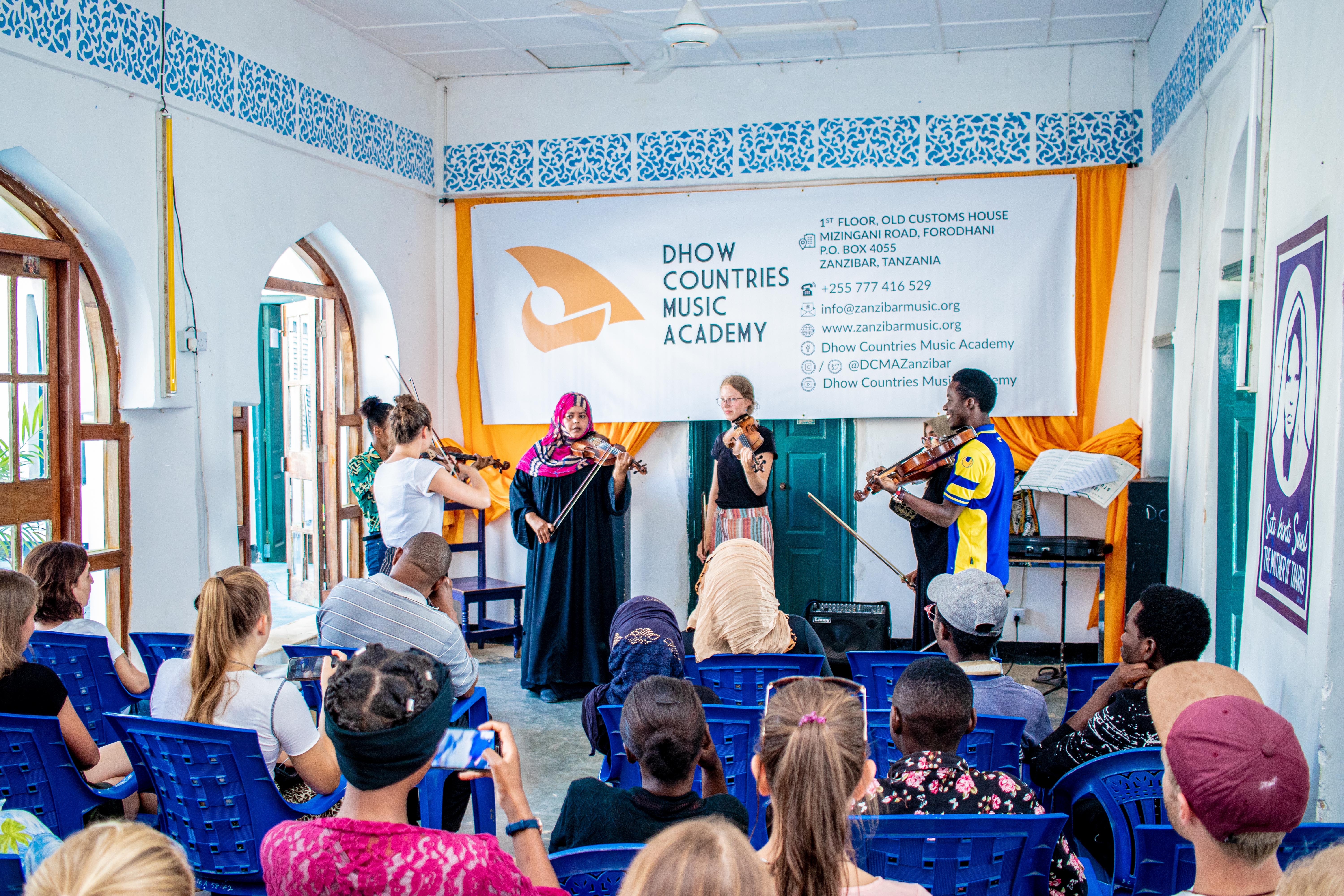 The DCMA recognizes that music empowers and unites people across cultures — and it also employs talented youth living in a struggling economy with limited job opportunities. For the 1,800 students who have trained at the DCMA, this is the only musical home they know, where they can learn and grow as professional musicians and artists.

One traveler from Spain, who recently visited the DCMA, wrote on TripAdvisor: “Personally, meeting the musicians was the best piece of my time on this island.”

As Zanzibar’s tourism sector rapidly grows, the DCMA believes that music plays an essential role in the celebration, preservation and promotion of Swahili culture, heritage and history. Zanzibar is far more than its beaches and luxury hotels — it’s a place bursting with talent that stems from an extraordinary history of cultural connection and collaboration.

Editor’s note: The author of this post has volunteered with DCMA.