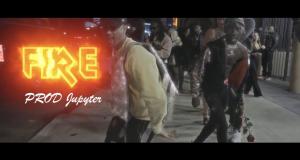 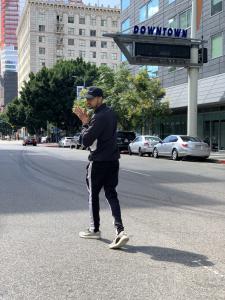 The Beverly Hills Police saw us shooting (Fire) in the middle of the night, and just gave us a ‘thumbs up’ and kept on going.”

MALIBU, CALIFORNIA, US, October 30, 2018 — Viral Video Star Zay Hilfigerrr and Hip Hop Star Favorite RahTwoFive joined forces this month to create a brand new song and music video called ‘Fire,’ shot on location in Hollywood and Beverly Hills, California, seen here below. Drawing a large crowd in Hollywood during the shoot, RaH mentions that during the Beverly Hills part of the shoot, the Beverly Hills police caught them shooting in the middle of the night, which he explains about below. Check out the video for “Fire” here:

The Los Angeles based singer known on Instagram as RahTwoFive, or otherwise simply known as RaH, racked up over a half-million new plays and growing, on the leading music streaming site SoundCloud. He has also recently launched an exciting new crowdfunding campaign, incorporating his official new fan club, at Patreon, seen below.

Zay Hilfigerrr, hailing from Detroit Michigan, was reportedly one of Instagram’s earlier adopters of a “shout out for shout out.” Growing from 10,000 followers to 20,000 and beyond, Zay’s early dance videos started blowing up online, during which he began performing at parties and doing meet-ups with other well known musicians in the city. When Hilfigerrr’s song “Juju on that Beat” broke a million streams, numerous companies reportedly started coming to him and the song’s co-artist Zayion, wanting to learn more about the song and the two artists. Reportedly a month and a half later, the song hit 9 million views on You Tube, then attracting the attention of Atlantic Records who decided to represent the new hit. With that song now having racked up a stunning 366 million streams and growing, the now legendary online success of Zay Hilfigerrr is easily complimented by his talent as a rapper and hip hop dancer.

Joining forces, Zay Hilfigerrr and Hip Hop’s favorite new rising star; the talented RahTwoFive was an obvious match. They both write, rap, dance, are in to fashion, and are both from Detroit, now transplanted to the entertainment capitol of the world–Hollywood.

Ready to dominate not only America, but also the massive Indian Bollywood market, Europe, and the rest of the world as well, RaHtwoFive–with the fashion model look–speaks and sings in fluent English. Of Indian origin, RaH also can speak fluent Hindi, Punjabi, and even some Spanish.

With the first three letters of his full name; “Rahul,” turning into his artist name, RaH got his nickname back in high school, which his friends used to call him. RaH states, “I think it’s cool, because it’s the name of the Sun God of Egyptian mythology, and I love the sun! My family and I traveled to Egypt around the same time I got the nickname, and it just stuck. RaH states that he likes reading about Egyptian myth, and also loves the colors they used in their art, which he also often incorporates into his other work as a fashion designer with his own label. He gradated from the widely respected Fashion Institute of Design and Merchandising (FIDM) in Los Angeles.

Advising other artists as his success grows, RaH encourages other singers and musicians, “Don’t give up! Continuously perfect your craft by fixing your weak points. Believe in yourself more than anyone else, and know inside that one-hundred-percent for sure, you will reach your goals!”

Further, maintaining his positive mindset, RaH says he is “intent on creating an immense, positive impact on the world through heart-changing art.” He credits his hope and faith with keeping him grounded, and optimistic. He reveals; “If I didn’t stay positive, there would be no hope. I feel my mission is to help lessen the division that exists in America and the world, and lessen this negativity on Earth, to really help people see and feel real love.”

RaH adds, “I can’t wait for you all to hear and see my new songs and see my videos including Fire. We had a lot of fun making this. You can stay up to date on my Instagram, which will feature news of all the new releases. I hope you enjoy them as much as I do! I love creating and sharing with you, and thank you for believing in me!”