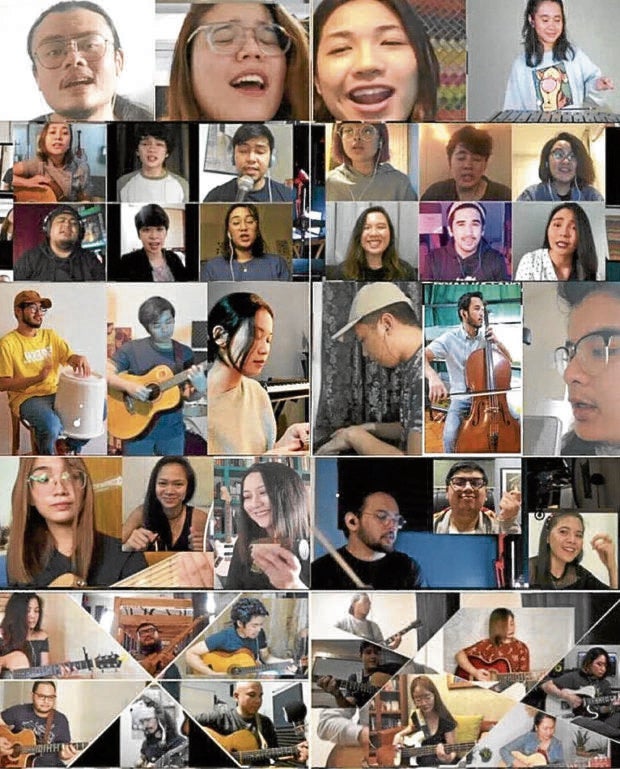 With entertainment-related gatherings considered nonessential activities under quarantine guidelines, many music artists are left with no choice but to improvise and exhaust all possible platforms that will allow them to continue showing off their talents and expressing their creativity.

Social media was the obvious choice.

“Musicians will have to look for other ways and means to work around this humongous setback. And online technology provides the most feasible venue,” acclaimed songwriter Jungee Marcelo told the Inquirer in a recent interview.

Fueled by a need to “empower and encourage the local music community to rise above the current limitations,” Jungee conceived Konekolab—a music and social experiment that had 40 millennial music artists connecting and collaborating on a song using whatever resources they have in their respective homes.

Konekolab’s first project is the song titled “D’yan Ka Lang,” which Jungee himself composed. And after setting the musical guidelines and parameters, he let the participants take care of the song production and recording.

“I prayed for a concept and God was gracious to direct me accordingly,” he said. “Via an assembly line of sorts, I started on the songwriting and basic arrangement, then challenged a number of young practitioners to participate in the production.”The entire creative process took four phases: the lay-in of the rhythm sections instruments were done by Virtus Lenon (guitars), Brad Coronel (piano), EO Marcos (drums) and Raisa Racelis (bass);

The rest of the artists—some of whom are based in the provinces and overseas—provided the vocal ensemble tracks, additional instrumental riff ensemble tracks and a few human percussion tracks.

“All these tracks were recorded at their own personal spaces, which we call Konekolab remote stations. Audio tracks were sent online from Metro Manila, Luzon, Visayas, Mindanao, as well as Australia and North America,” Jungee related. “We had a total of 40 artists dubbing on professional and makeshift recording facilities.”

“They utilized whatever was available to them amid the lockdown, including cell phones, computers and other gadgets and gizmos,” said Jungee, whose diverse discography includes not only pop and gospel music, but also television themes and commercial jingles.

“We all put in whatever we could contribute for the good of the recorded output,” Jungee said. “The renditions were their very own personal creative inputs. The result, magical!

While gathering 40 artists for the project may seem like a challenging task, it actually came easy for Jungee, who has mentored many of the participants—his “beloved kids” one way or another.

“It wasn’t difficult to get them on board, maybe because they trust me—I have mentored some of them in songwriting camps, workshops and projects. A good number of them actually call me ‘Tatay,’” related Jungee, who has penned many contemporary pop hits, like Gary Valenciano’s “Hataw Na” and Daniel Padilla’s “Nasa ‘Yo Na Ang Lahat.”

He specifically chose millennial artists, he said, because they’re “full of energy, but not a lot of collective venues to express.” “It was logical to harness this energy into something we all will remember for the rest of our lives,” he said.

And this is just the beginning. Jungee is convinced that improving online presence is the way to go in the postpandemic industry.

“I knew the industry will eventually rely heavily on technology. The shift simply happened earlier than expected because of the major restrictions we had to adhere to,” he pointed out. INQ