First signed into YBNL Nation, founded by Olamide Baddo, AG who perfectly combines urban highlife and R&B genres has made a name for himself in the Nigerian music industry.

At the age of 15, the singer who is currently married to co-singer, Simi, wrote his first song and joined the junior choir of his church.

With a Higher National Diploma in Arts and Design majoring in Graphics at the Lagos State Polytechnic, AG is not only gifted in music but also a graphic designer, painter and sculptor. 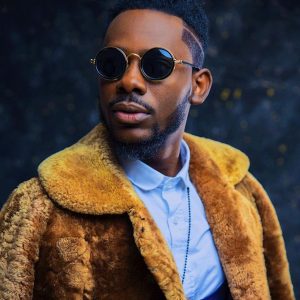 The ‘Sade’ crooner was formerly a member of a defunct all-boy group known as “The Bridge”, which released a couple of singles and featured artists like Skales and GT the Guitarman.

Adekunle Gold first drew the spotlight on himself, when he photoshopped himself into photos with popular celebrities and earned him the name, ‘King of Photoshop’.

When he joined YBNL Nation in 2015, he released his debut studio album Gold, which debuted at number 7 on the Billboard World Albums chart.

After which came his album “Orente” which he says was inspired by experiences in his life but he got full attention when he released his 2015 hit single “Sade”, a highlife cover of One Direction’s “Story of My Life”

His debut single, ‘Sade’ won the Best Alternative Song award at the 2015 Headies Awards ceremony. In 2015, he won the award for Revelation of the Year at the AFRIMA.

After this came some of our favourites songs like ‘Pick Up, Ariwo, Ire, Call On Me, most recently The Promise with his wife Simi, Kelegbe and lots more.