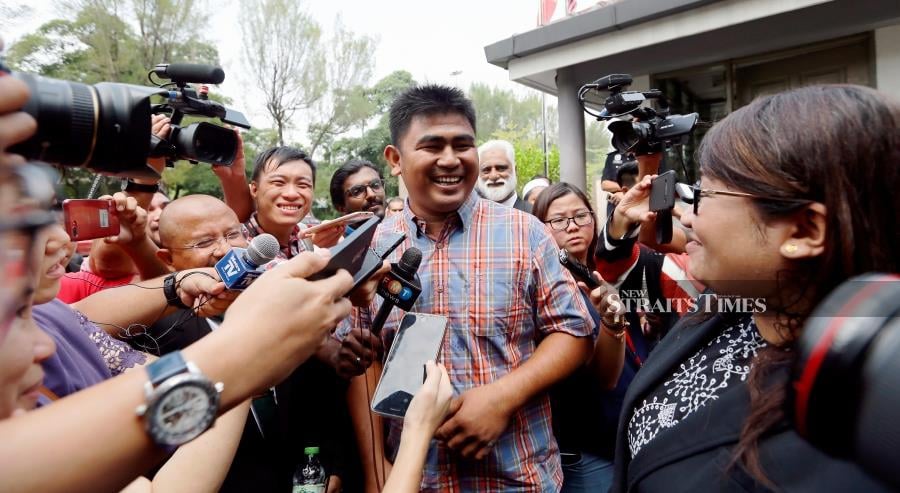 Asyraf speaking to reporters after the verdict was delievered. NSTP/ROSLIN MAT TAHIR

Muhammad Asyraf Mohd Kassim said this when asked about his family’s feelings after the verdict by the Coroner’s Court on the death of his brother, firefighter Muhammad Adib.

Asyraf could not hold back his tears when coroner Rofiah Mohamad ruled that Adib’s death was due to criminal act by more than two people.

Adib, 24, died from severe injuries sustained after allegedly being assaulted by rioters at the Seafield Sri Maha Mariamman temple in Subang Jaya on Nov 27 last year.

Asyraf, who looked a bit overwhelmed after the proceeding, said he was happy with the verdict but more needs to be done to find justice for Adib.

“I had informed my parents and they were glad with the decision. We will hold a special prayer for him (Adib) soon.

“Now I hope the authority will continue to investigate and arrest the culprits who beat my brother to death. We want all the people involved in this incident to be brought in to face the music,” said Asyraf before he was swarmed by lawyers and non-governmental organisations’ representatives who wanted to congratulate him on the verdict.

He smiled and thanked everyone who had helped the family during the 41-day inquest.

Also present during the verdict was Muhammad Adib’s ex-fiancée Nurul Najihah Mohd Radzi, 26, who was also satisfied with the court’s decision.

“Praised to God, I am very glad with the court’s decision,” she said briefly before leaving the building accompanied by an unidentified woman.

Syed Shahril, who was also one of the witnesses during the inquest, said he could not give his comment as the case is now under police investigation.

“I am sorry but I cannot comment further,” he said in between tears.

When asked about his personal taught on the decision, Syed Shahril said: “Only God knows my feelings right now.”

Zainal Abidin, who led the union entourage, said they came to the court building to give their support to Adib’s family and as representatives for all firefighters nationwide.

“We are not here to rally but we are representing all firefighters in this country,” he said.